Amira Hass was educated at the Hebrew University of Jerusalem.

Robert Fisk and Israeli journalist Amira Hass walk alongside a section of "The Wall" at the West Bank.

Robert Fisk and Israeli journalist Amira Hass walk alongside a section of "The Wall" at the West Bank.

Amira Hass was educated at the Hebrew University of Jerusalem.

Drinking the Sea at Gaza: Days and Nights in a Land under Siege

In 1993, Amira Hass, a young Israeli reporter, drove to Gaza to cover a story-and stayed, the first journalist to live in the grim Palestinian enclave so feared and despised by most Israelis that, in the local idiom, "Go to Gaza" is another way to say "Go to hell." Now, in a work of calm power and painful clarity, Hass reflects on what she has seen in the Gaza Strips's gutted streets and destitute refugee camps. Drinking the Sea at Gaza maps the zones of ordinary Palestinian life.

Reporting from Ramallah: An Israeli Journalist in an Occupied Land

(The writings of an Israeli journalist who has chosen to l...)

The writings of an Israeli journalist who has chosen to live in a Palestinian town in order to provide a firsthand description of what daily life is like for the population.

(A resistance fighter's "remarkable" memoir of her impriso...)

A resistance fighter's "remarkable" memoir of her imprisonment at the infamous Nazi concentration camp. In this volume, her insightful diary is accompanied by an introduction from her daughter, Amira Hass.

Amira Hass is an Israeli ex-teacher, journalist, and author. She has spent many years living in Palestinian communities of the Gaza Strip and the West Bank, from where she has fearlessly and sensitively reported on the Palestinians' progress from intifada toward independence.

Amira Hass was born on June 28, 1956, in Jerusalem, Israel. She is the only child of a Sarajevo-born Jewish mother, Hanna Lévy-Hass, who survived nine months in the Bergen Belsen extermination camp in 1944-1945, and of a Romanian born Jewish father who worked all his life as a permanent of the Israeli Communist Party, ending as a member of the central committee.

Amira Hass was educated at the Hebrew University of Jerusalem, where she studied the history of Nazism and the European Left's relation to the Holocaust. In 1989, she quit her studies. 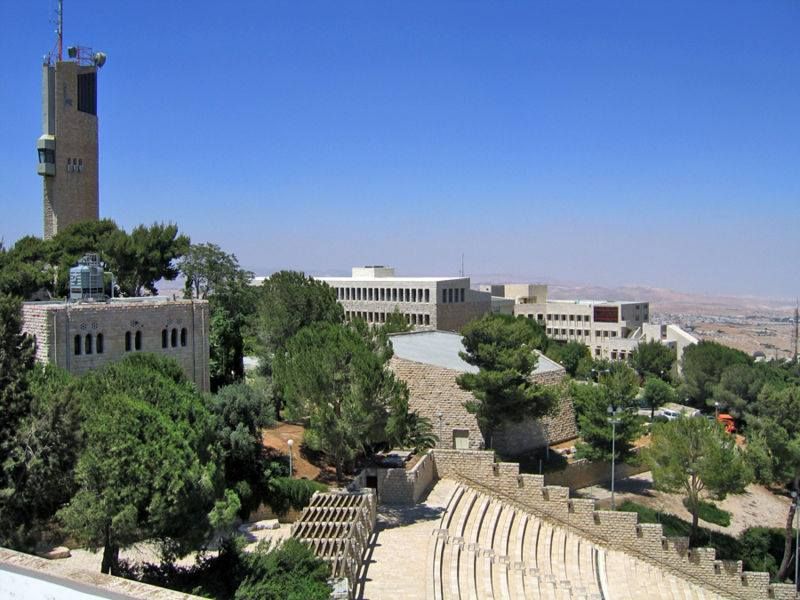 Amira Hass worked as a teacher before beginning her journalism career. In 1989, she began working as a copy editor for Haaretz Daily. At the same time, she volunteered for Workers Hotline, a human rights group dedicated to reaching out to vulnerable workers, many of whom were Palestinian. Assigned by Haaretz, to cover the Gaza Strip in 1991, Hass soon decided to live in Gaza for part of each month. She stayed at private homes all through the Strip. After the signing of the Israeli-Palestinian peace accord in December 1993, Hass moved permanently to Gaza, and she was the first and only Israeli journalist to live in the Palestinian territories. By 1991, Hass was writing weekly features for Haaretz Daily, and in 1993, she became a full-time writer for the paper. She has lived in the Occupied Palestinian territories for nearly 16 years. She became acquainted with life in Gaza and grew frustrated about how poorly Israel's occupation of Gaza was represented in the Israeli press. She has been reporting on the life of Palestinians under the Israeli occupation and covering the major armed clashes and Israeli military attacks. Her goal has been to provide her readers with detailed information about Israeli policies, especially restrictions on the freedom of movement.

However, convinced that Israelis needed to know the truth about the plight of the Palestinian people, Hass doggedly defied the Israeli occupation authorities, which initially refused to provide her information. She managed to file her daily reports in spite of frequent curfews, prolonged closures of the Occupied Territories, periodic violent demonstrations, and armed clashes. With the establishment of the Palestinian National Authority (PNA), she found herself confronted and often restricted by another governmental structure. On several occasions, the PNA complained that she was too critical of them and warned that her life was in danger. In the course of her work, Hass has been threatened, harassed, and detained. In May 2009, she was detained by Israeli police on her return from a four-month stay in Gaza "for violating a military order" (which forbids entry into Gaza) and "for staying illegally in an enemy state." She had also been detained in December 2008 by Israeli police on her return to Ramallah for violating the same military order.

Amira Hass based her debut book, Drinking the Sea at Gaza: Days and Nights in a Land under Siege, on her experiences reporting about the plight of the Palestinian people who have lived for many years under Israeli occupation. One of Hass' main contentions since she first began reporting from Gaza is that few Israelis truly understand the plight of the Palestinian people, largely out of fear and prejudice. In fact, few of her countrymen understood why she would want to live in Gaza. "To most Israelis, my move seemed outlandish, even crazy, for they believed I was surely putting my life at risk," Hass wrote in Drinking the Sea at Gaza. One of the major themes Hass discusses in her book is that Israel has continued to rule over Gaza with an iron fist, despite the fact that Israel signed over sovereignty to the territory as part of the Israeli-Palestinian Peace Accord of 1993. Numerous literary critics lauded Drinking the Sea at Gaza for its honest portrayal of the political realities and daily tribulations faced by the Palestinian people living in the occupied territories, especially by those living in Gaza. Because of her criticisms, many Israelis have viewed Hass as somewhat of a traitor. She dispelled this notion in a 2002 interview with Marjorie Miller of the Los Angeles Times when she suggested that she was just doing her job as a journalist. Hass moved to the Palestinian town of Ramallah in 1997 when she began covering the West Bank, another occupied territory.

Originally published as Li-Shetot Meha-Yam Shel Azah in 1996, Hass' book was translated to English by Elana Wesley and Maxine Kaufman-Lacusta, and published in the United States three years later. Despite the three year span, many literary critics felt the work was still pertinent to the political events taking place in Israel because the Israeli government's policies toward the occupied territories had not changed significantly during the period. The book includes vivid descriptions of what it is like for the average person to live in Gaza. For example, in the chapter titled "Gaza Prison," Hass discusses how Palestinians are only allowed to leave Gaza with a permit given by the Israeli government, which she believes is an arbitrary process with no clear guidelines. Hass describes how this process hinders Palestinian businessmen and workers alike, who must overcome the obstacle to earn a living. Throughout the book, Hass decries the prevailing Israeli stereotypes of the Gazan people as "savage, violent and hostile to Jews." However, she doesn't put all the blame on the Israelis for the hostilities between the two peoples, or the sorry state of the Palestinians. In the book's concluding chapter, Hass blasts the cruel and repressive governing tactics of the Palestinian Authority, led by Yassir Arafat, and charged with administering the territories as part of the Israeli- Palestinian Peace Accord. In fact, Hass describes how many of her Palestinian friends decry Arafat's authoritarian leadership, which many believe has only worsened the Palestinian's crumbling economy.

In 2009, Hass prepared the concentration camp diary of her mother, Hanna Lévy-Hass, for commercial publication. The book is a remarkable account of a Jew from Sarajevo who joined Tito's partisans, was captured by the Nazis, and, in the summer of 1944, was put on a train from Montenegro to Bergen-Belsen.

In 2013, Amira Hass has been subjected to a wave of hate mail and calls for prosecution for incitement to violence since writing an article defending the throwing of stones by Palestinian youths at Israeli soldiers. The opinion piece, published in the liberal Israeli daily Haaretz, for whom Hass works, drew outraged reactions on the internet and from media commentators. The Yesha Council, which represents settlers, and the Legal Forum for the Land of Israel filed complaints with the police and the Israeli attorney general and demanded that Hass be investigated for incitement to violence and terrorism. Hass argued that stone-throwing was "an action as well as a metaphor of resistance." 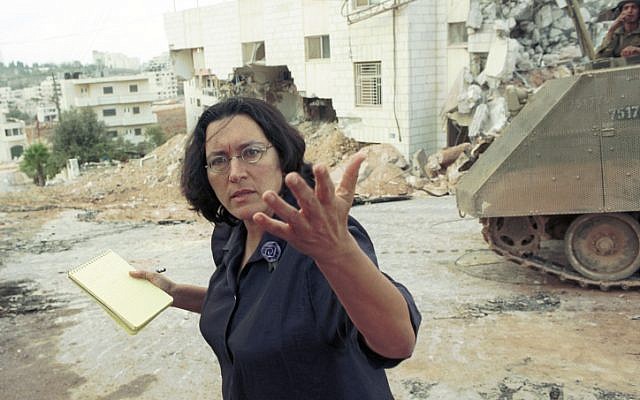 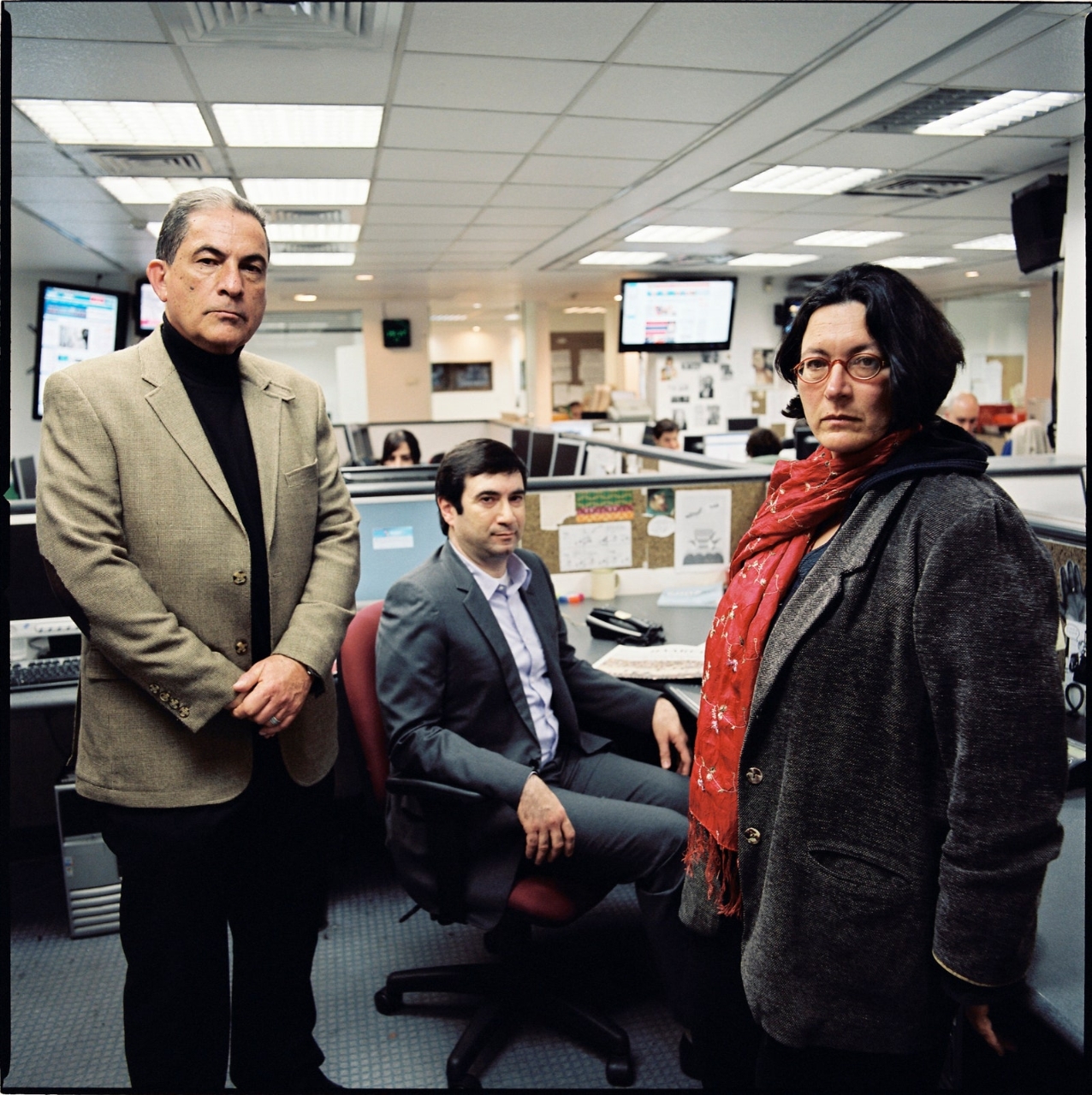 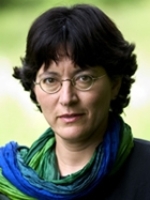 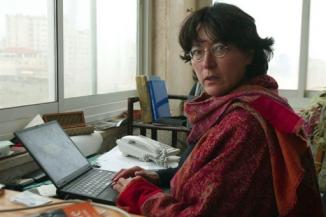 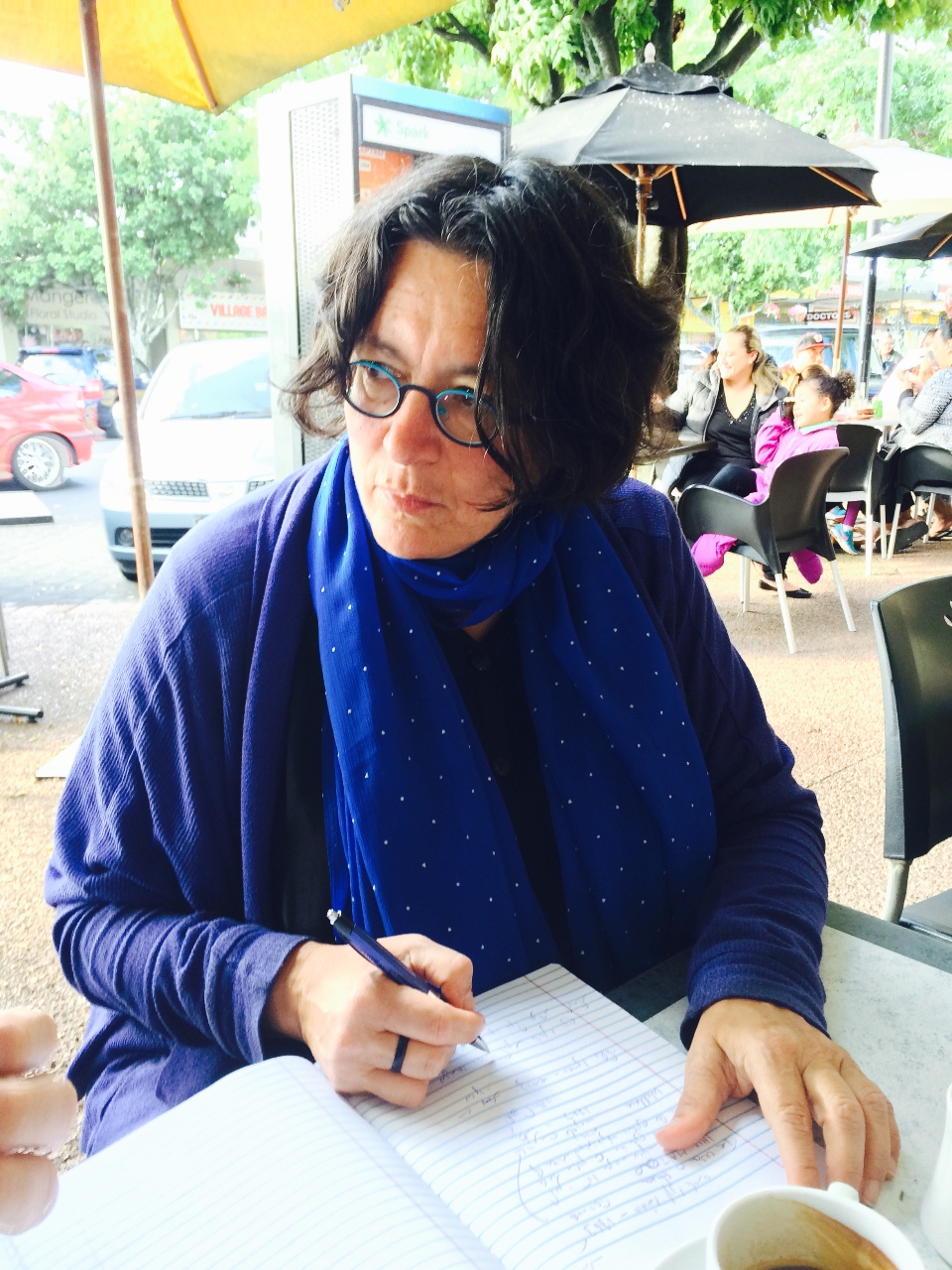 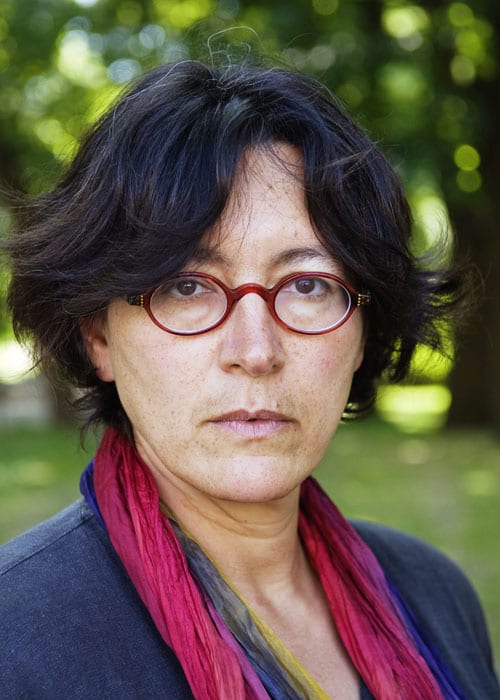 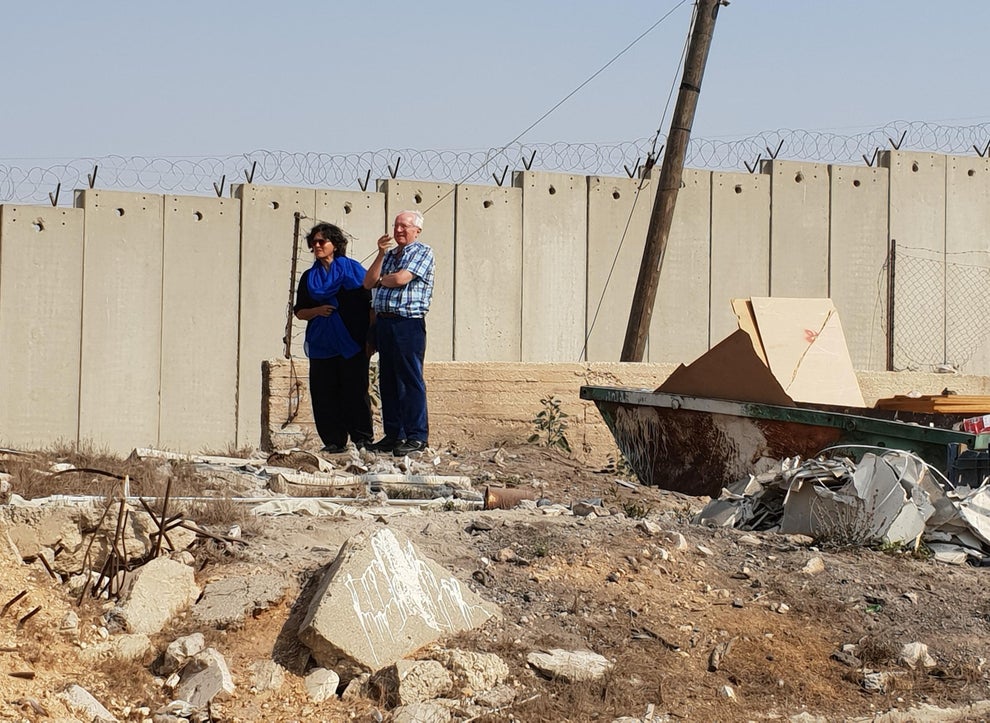 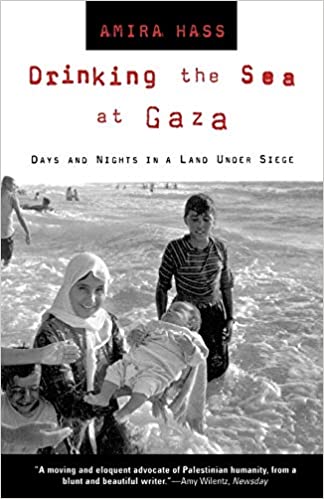 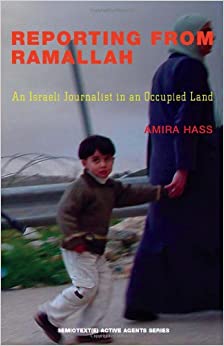 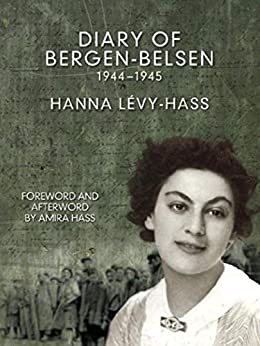 Amira Hass' reporting is generally sympathetic to the Palestinian point of view and critical of Israeli government policy towards the Palestinians. During the years of the Al-Aqsa Intifada, however, Hass published several highly critical articles about the chaos and disorder caused by militias associated with the Fatah party of Yasser Arafat and the bloody war between Palestinian factions in Nablus. Her reportage of events and her voicing of opinions that run counter to both official Israeli and Palestinian positions has exposed Hass to verbal attacks, and opposition from both the Israeli and Palestinian authorities.

Amira Hass has not allowed her gender, ethnicity, or nationality to obstruct her from pursuing the truth in her reporting.

Quotations: "It is my role […] to exercise the Right for Freedom of the Press, in order to supply information and to make people know."

"Journalism is not about telling people what they like to hear. The task of journalists is to monitor power and, in the relations between Israelis and Palestinians, Israel is certainly the center of power."

Amira Hass is a person of great personal courage, unwavering professionalism, and commitment to defending the public's right to know.