Marshall’s successor to the Cambridge chair and devoted expositor of Marshall’s economics during his tenure of the chair. Pioneered welfare economics in Wealth and Welfare, which embodied his own concerns for justice and the protection of the interests of the poor. Singled out by Keynes in The General Theory as the leading advocate of the classical views which Keynes rejected, he came to accept much of Keynes’s thinking in his later years. The quality of all his books is outstanding but he has only slowly won a place as an economist of first distinction. Lector, Fellow, Professor Political Economics, King’s College, Cambridge, 1901, 1902, 1908-1913.

Arthur Cecil Pigou was an English economist. As a teacher and builder of the school of economics at the University of Cambridge he trained and influenced many Cambridge economists who went on to fill chairs of economics around the world. His work covered various fields of economics, particularly welfare economics but also including industrial fluctuations, unemployment, public finance, index numbers, and measurement of national output.

Arthur Cecil Pigou, commonly known as A.C. Pigou, is best known today for his work in welfare economics. He made a large contribution to the theory of economic prosperity. The results of his research were presented in his book "Economics of Welfare," published in 1924. Pigou was not engaged in global issues of "economics”. By A.Pigu economic well-being is "the totality of satisfying and unsatisfying needs, which can be measured with money." The "welfare economics" plays a central role in such a concept as national income, or as he called it a national dividend. According to Pigou national dividend is "everything that people buy for their income, as well as services provided by household". The national dividend is those goods and services which are produced by an individual in society. National dividend may be different in different periods. He describes not only the efficiency of production, but also it is a key indicator of social welfare. The satisfaction of poor will rises quicker than the satisfaction of reach will fall. According to the theory A.Pigu redistribution of wealth from the rich to the poor could increase overall welfare only if it does not reduce national income.

At the same time Pigou pointed out that the size of the national dividend was not an accurate indicator of the general welfare. This is explained by the fact that the concept of a national dividend includes everything that has monetary value, what has cash value.

A.Pigu shared private and public goods. He paid great attention to the issue of differences in individual well-being of one group of people and the general welfare of the state. The concept of general welfare of the state is higher than the other two, as it includes more than the level of income, and other categories, such as the relationship between people and their living conditions, working conditions, etc.

It should be mentioned the relationship between private and public good and income. In order to have the optimal relations between them, it is necessary to equalize private and social product as much as possible.

Back to the question of market competition. If we compare the welfare theory Pigou and Pareto optimum, it can be noted that A. Pigou was sure that the market, or the market competition, is not able to provide optimum welfare. Pigou saw the sollution, on one hand, in price regulation, and on the other hand, in usage of subsidies. In the first case, the lower prices will contribute to the expansion of production, and hence welfare, higher prices will reduce the demand for the product, and as a result, will not contribute to welfare. Similarly, in the case of payment of subsidies, the use of progressive tax system: the government pays subsidies "victims", thus improving their welfare.

Thus, the optimum well-being, according to Pigou, can only be achieved with the direct involvement of the state with its impact on the use of resources and the distribution of income. This is probably considered A.Pigu as income equality maximizes the sum of utility in society.

To cut long story short, there are some main definitions, which were invented and expanded by A. Pigou or even named in his name:

- Pigou effect is a term in economics referring to the relationship between consumption, wealth, employment and output during periods of deflation. Defining wealth as the money supply divided by current price levels, the Pigou effect states that when there is deflation of prices, employment (and thus output) will be increased due to an increase in wealth (and thus consumption). Arthur Pigou argued against Keynesian economic theory by professing that periods of deflation due to a drop in aggregate demand would be more self-correcting. The deflation would cause an increase in wealth, causing expenditures to rise, and thus correcting the drop in demand.

Pigou approval can be taken or not, you theory can agree or disagree with his theory, but one thing is certain, that his merit is that he marked the beginning of the theory of distribution of national income, directed and reviewed the problem of combining economic interests of the individual, the company and society.

Pigou’s first area of study as a student at Cambridge University was the ‘undivided Historical Tripos’. This program of study was, at least for the period when he was an undergraduate student, ‘undivided’ in the sense that it was not offered as a two part program, which, for example, was the case with the Moral Sciences Tripos. The historical element of the Tripos was also oriented towards the practical goal of

developing students’ capacities to learn and reason in matters of politics and public affairs. During this period Pigou was mentored by his tutor Oscar Browning, with tutor and student entering into correspondents on a range of issues. Among other things, the relationship between Browning and Pigou was helpful to Pigou being

promoted to an undergraduate scholarship in 1898,12 which assisted Pigou financially when completing his undergraduate studies. It also led to Pigou being invited to the King’s College Political Society, which Browning had founded to further the scientific study of political issues. It was also during the time that Pigou was being mentored by Browning as a student in the Historical Tripos

that signs of Pigou’s interest in economics and ethics emerged. In 1899 Pigou obtained his first Bachelor of Arts degree by obtaining a ‘first’ in the undivided Historical Tripos. Given Pigou’s growing interest in economics and ethics, and the fact that the Historical Tripos was oriented towards educating statesmen, it is perhaps not surprising that he then immediately commenced Part II of the Moral Sciences Tripos, which he also completed with a ‘first’, this time in 1900.

During this period Pigou further developed his understanding of economics and ethics and political philosophy, largely under the influence of a new mentor, namely Alfred Marshall, who, as well as being very influential in securing posts for Pigou at Cambridge, was to prove the greatest single influence on the development of Pigou as 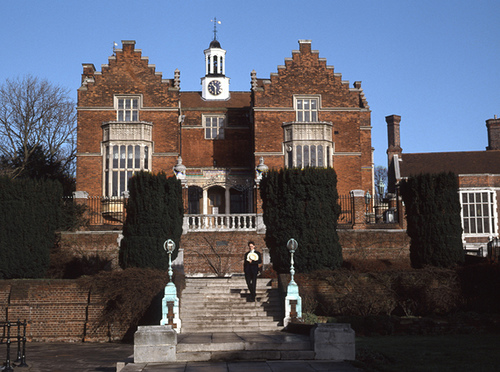 Marshall’s successor to the Cambridge chair and devoted expositor of Marshall’s economics during his tenure of the chair. Pioneered welfare economics in Wealth and Welfare, which embodied his own concerns for justice and the protection of the interests of the poor. Singled out by Keynes in The General Theory as the leading advocate of the classical views which Keynes rejected, he came to accept much of Keynes’s thinking in his later years.

The quality of all his books is outstanding but he has only slowly won a place as an economist of first distinction. Lector, Fellow, Professor Political Economics, King’s College, Cambridge, 1901, 1902, 1908-1913.

Quotations: " If a man marries his housekeeper or his cook, the national dividend is diminished. "

"It is not pretended that, at the present stage of its development, economic science is able to provide an organon even remotely approaching to what it imagines for itself as its ideal. "

He was a reluctant member of the Cunliffe Committee on the Currency and Foreign Exchange (1918–1919), the Royal Commission on the Income Tax (1919–1920), and the Chamberlain Committee on the Currency and Bank of England Note Issues (1924–1925). Pigou was elected to the British Academy in 1925, but resigned in 1947. He was a foreign honorary member of the American Academy of Arts and Sciences, a foreign member of the Accademia dei Lincei, and an honorary resident of the International Economic Committee.