The Complete Consumer Book: How to buy everything wisely and well

((FROM THE COVER) BESS MYERSON, ONE OF COUNTRY'S FOREMOST ...)

(FROM THE COVER) BESS MYERSON, ONE OF COUNTRY'S FOREMOST AUTHORITIES ON CONSUMER PROTECTION, BRINGS TOGETHER A VAST COMPENDIUM OF HELPFUL INFORMATION AND ADVICE FOR EVERY CONCERNED CONSUMER IN THIS UNIQUE GUIDE TO BUYING EVERYTHING PRUDENTLY, WISELY, AND WELL. DRAWING UPON HER EXPERIENCE AS DIRECTOR OF NEW YORK CITY'S DEPARTMENT OF CONSUMER AFFAIRS AND ON THE EXPERIENCE OF READERS OF HER NATIONALLY SYNDICATED NEWSPAPER COLUMN, MS. MYERSON SURVEYS THE DANGERS THAT NEEDLESSLY COST AMERICAN CONSUMERS BILLIONS OF DOLLARS EACH YEAR AND SPELLS OUT THE SIMPLE STEPS WE ALL SHOULD TAKE TO AVOID THEM. BEGINNING WITH THE GROUND RULES, THE FIRST OF WHICH IS "MAY THE BUYER BEWARE" SHE EXAMINES THE NEGATIVE ATTITUDES THAT LEAD MILLIONS INTO TROUBLE, AND PROPOSES POSITIVE PRACTICES TO AVOID THE PITFALLS OF CONSUMER FRAUD.

The I Love New York Diet

(Safer than the FAD diet and it works better. Recommended ...)

Safer than the FAD diet and it works better. Recommended by leading drs.

Myerson, Bess was born on July 16, 1924 in New York City. Daughter of Louis and Bella Myerson. 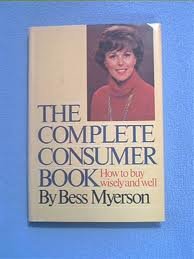 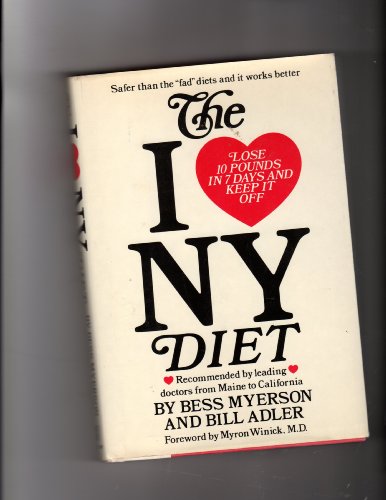 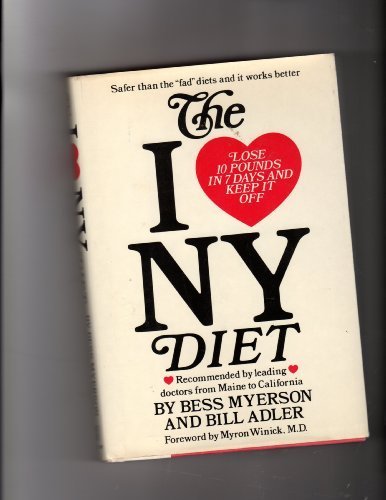