Other photo of David William Faupel

Other photo of David William Faupel

(The digital copies of this book are available for free at...)

The digital copies of this book are available for free at First Fruit’s website. place.asburyseminary.edu/firstfruits The Second in a Series of "Occasional Bibliographic Papers of the B. L. Fisher Library" PREFACE This project was deemed appropriate to follow Donald Dayton's The American Holiness Movement: A Bibliographic Introduction, which was the first publication in the B. L. Fisher Library bibliographic series. A summary of this essay on Pentecostalism was presented to the twenty-sixth annual conference of the American Theological Library Association held at Waterloo, Ontario, in June 1972. This is a revised text of the essay as it appears in the 1972 Proceedings of the Association. When leaders of the Society for Pentecostal Studies learned of the proposed project, they expressed interest in this effort to gain bibliographic control of the extensive literature in the Pentecostal Movement. As a result this paper is published as the Second Occasional Paper in the B. L. Fisher Library Bibliographic Series and as the first publication of the Society for Pentecostal Studies. I wish to express appreciation to Peter VandenBerge, then vice-president of ATLA, for providing a place on the program for the paper and to the Association for granting permission to print the paper as a monograph. I am indebted to several colleagues on the faculty of Asbury Theological Seminary: Delbert R. Rose, Professor of Biblical Theology and Historian for the Christian Holiness Association; Kenneth C. Kinghorn, Professor of Church History; Robert A. Traina, Academic Dean; Miss Susan A. Schultz, Director of Library Services; and Donald W. Dayton, former Acquisitions Librarian, for their encouragement and critical evaluation of the manuscript. I am also grateful to Vinson Synan, secretary of SPS and William Menzies, former president of SPS for their guidance and encouragement in the initial stages of the project. In addition, they, along with Zenas Bicket, Donald Bowdle, Steven Durasoff, William MacDonald, and Russell Spittler, all members of SPS, read the manuscript, providing many helpful suggestions and corrections. Oral Roberts University graciously made its Pentecostal Collection available to me, and Mrs. Juanita Raudszus, ORU's Learning Re- sources Librarian, provided several bibliographic tools which saved many hours of labor. Finally, I wish to express my thanks to several members of the B. L. Fisher Library staff: Len Chester typed the first draft from a difficult manuscript; Mrs. Esther Richter prepared the final copy for printing; and David Bundy and Mrs. Esther James did much of the editing and proofreading. The literature mentioned in this paper is scattered throughout the United States; therefore, checking all data for bibliographical accuracy proved to be a problem. I accept full responsibility for any errors which may appear, and would greatly appreciate receiving information on any inaccuracy discovered by the readers. David W. Faupel Public Services Librarian and Instructor in Bibliography and Research B. L. Fisher Library Asbury Theological Seminary --- CONTENTS Preface Introduction World Surveys Classification of American Pentecostal Groups Theological Distinctives Missions Homiletics and Sermons Apologeticds Appendices Index 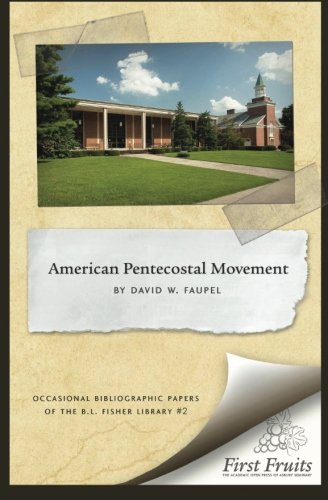