Gallery of Eratosthenes of Cyrene

A bust of Eratosthenes.

Other photo of Eratosthenes of Cyrene

Other photo of Eratosthenes of Cyrene

A bust of Eratosthenes.

Eratosthenes was a Greek mathematician, astronomer, geographer, and poet. He made the first measurement of the size of Earth for which any details are known.

Eratosthenes, the son of Aglaos, was born c. 276 B.C. in Cyrene, but spent most of his working life in Alexandria.

At some period during his early manhood, Eratosthenes went to Athens for the ancient equivalent of university education, and there he associated with the Peripatetic Ariston of Chios, Arcesilaus and Apelles of the Academy, and Bion the Cynic.

In Alexandria Eratosthenes was head of the library attached to the famous Museum from c. 235 B.C. When he was about thirty, he was invited to Alexandria by King Ptolemy III (Euergetes I), possibly at the instigation of Eratosthenes’ fellow countryman Callimachus, who had already been given a post in the library by Ptolemy II. On the death of the first chief librarian, Zenodotus, c. 235 B.C., Eratosthenes was appointed to the post, Callimachus having died c. 240 B.C. At some time during his stay in Alexandria, he became a tutor to Euergetes’ son and remained in favor with the royal court until his death.

Eratosthenes was one of the foremost scholars of his time and produced works on geography, mathematics, philosophy, chronology, literary criticism, and grammar as well as writing poetry. His most enduring work was in geography, particularly notable is his measurement of the circumference of the earth, but he himself seems to have taken most pride, as regards his scientific work, in his solution to the famous problem of doubling the cube, to celebrate which he composed an epigram disparaging previous solutions and dedicated to Euergetes and his son; the authenticity of this poem has been questioned but on inadequate grounds.

As a mathematician, Eratosthenes ranked high enough in the estimation of the great Archimedes to have one of the latter’s treatises, the Method, dedicated to him and to be the recipient of a difficult problem in indeterminate analysis, known as the “Cattle Problem,” for communication to the mathematicians of Alexandria. He was the first Greek writer to make a serious study of chronological questions and established the system of dating by olympiads, while as an authority on Old Comedy he is constantly cited in the scholia to Aristophanes’ plays.

Eratosthenes’ Geography was in three books, as we learn from Strabo, who quotes from it frequently and is, in fact, the chief source of our knowledge of it. It long remained a prime authority on geographical matters; Julius Caesar evidently consulted it, since in his description of the Germans he mentions that Eratosthenes knew of the Hercynian Forest, and Strabo admits that for the southeastern quarter of the inhabited world he has no better authority than Eratosthenes. The work was the first scientific attempt to put geographical studies on a sound mathematical basis, and its author may be said to have been the founder of mathematical geography. It was concerned with the terrestrial globe as a whole, its division into zones, changes in its surface, the position of the oikoumene as then known, and the actual mapping of it, with numerous estimates of distances along a few roughly defined parallels and meridians; but it also contained a certain amount of material descriptive of peoples and places.

Strabo, who disliked the mathematical side of the subject and much preferred purely descriptive geography, several times complains that Eratosthenes put too much emphasis on mathematical topics such as the above. Hipparchus, on the other hand, criticizes his predecessor for not making sufficient use of astronomical data in fixing the reference lines of his map and not treating the subject in a mathematical enough manner. One of Eratosthenes’ main purposes was to correct the traditional Ionian map, which had a round oikoumene with Delphi at the center, wholly surrounded by a circular ocean, and to sketch a better one, making use of all the data at his command - which, as head of the largest library in antiquity, must have been considerable.

Eratosthenes used as his baseline a parallel running from Gibraltar through the middle of the Mediterranean and Rhodes, to the Taurus Mountains, which were extended due east to include the Elburz range, the Hindu Kush, and the Himalayas, which formed the northern boundary of India. Intersecting this main parallel at right angles was a meridian line taken as passing through Meroë, Syene, Alexandria, Rhodes, and the mouth of the Borysthenes. Wherever Eratosthenes found in his sources data that he could correlate with one or both of the above baselines, he was enabled to sketch in other parallels. In addition, he divided at least the southeastern quarter of the oikoumene into rough geometrical figures shaped like parallelograms, which he called “seals”, forming the first “seal” out of India and working westward.

Naturally, the data at his disposal, mainly travelers’ estimates of days’ voyages and marches, which are notoriously unreliable - the only scientific data available were the gnomon measurements of Philo, prefect of Ptolemy, at Meroë, of Eratosthenes himself at Alexandria, and of Pytheas at Marseilles, together with some sun heights recorded by the latter - were of dubious accuracy, and any mapping done on the basis of them was bound to be largely guesswork. Hipparchus has no difficulty in showing that the figures and distances given by Eratosthenes are mathematically inconsistent with each other, and he therefore rejects them, together with some of the sensible alterations proposed by Eratosthenes for the traditional map, thus demonstrating that inspired guesswork sometimes gives better results than scientific caution.

Although it is clear from the Geography that Eratosthenes was familiar with the concept of the celestial sphere, he does not seem to have done any original work in astronomy apart from the above measurements made in a geographical context; his name is not connected with any purely astronomical observation, he does not appear among the authorities cited by Ptolemy in the Phaseis for data relating to the parapegmata or astronomical calendars, and only one astronomical title is attributed to him (and that wrongly): the fragmentary Catasterismoi, which tells how various mythical personages were placed among the stars and gave their names to the different constellations, descriptions of which are given. It is possible that an inferior second-century compilation of the same nature, called Poetica astronomica and going under the name of the Augustan scholar Hyginus, is based partly on a work of Eratosthenes, who is cited some twenty times, but this is hardly serious astronomy.

In mathematics, Eratosthenes’ chief work seems to have been the Platonicus, of which we have a few extracts given by Theon of Smyrna, who wrote in the second century. In this work, Eratosthenes apparently discussed from a mathematical and philosophical point of view such topics as proportion and progression and, arising from this, the theory of musical scales. Also in this work he gave his solution of the famous Delian problem of doubling the cube and described a piece of apparatus by which a solution could be obtained by mechanical means; the description is preserved for us by Eutocius, a sixth-century commentator on the works of Archimedes, and includes Eratosthenes’ epigram commemorating his achievement; Pappus also describes the apparatus and the method. Eutocius gives his information in the form of a letter from Eratosthenes to King Ptolemy Euergetes; the “letter” is almost certainly not genuine, but there is no reason to doubt that the contents represent the matter of Eratosthenes’ solution or that the epigram is his.

In arithmetic, Eratosthenes invented a method called the “Sieve” for finding prime numbers. According to this, one writes down consecutively the odd numbers, starting with 3 and continuing as long as desired; then, counting from 3, one passes over two numbers and strikes out the third and continues to do this until the end. The same process is gone through with 5, but this time passing over four numbers and striking out the fifth. The process may be repeated with consecutive odd numbers as many times as one likes, on each occasion, if n is the odd number, n-1 numbers being passed over and the next struck out; the remaining numbers will all be prime. Pappus also attributes to Eratosthenes a work On Means, the contents of which are a matter of conjecture but which was important enough to form part of what Health calls the Treasury of Analysis, comprising works by Euclid, Apollonius, Aristaeus, and Eratosthenes.

In chronology, Eratosthenes apparently wrote two works, Chronography and Olympic Victors; both must have entailed considerable original research, and the former seems to have been a popularizing work containing a number of anecdotes, several of which are repeated by Plutarch.

In literary criticism Eratosthenes wrote a work in not less than twelve books entitled On the Old Comedy, the contents of which ranged over textual criticism, discussion of the authorship of plays from the dates of performances, and the meanings and usages of words; it was highly thought of by ancient scholars, being frequently cited, and its loss is greatly to be regretted. He also seems to have written a separate work on grammar.

Finally, as befitted an Alexandrian polymath, he had a not inconsiderable reputation as a poet; his three main poetical works were Hermes, Erigone, and Anterinys or Hesiod. The first had the same theme at the beginning as the well-known Homeric hymn but went on to draw a picture of the ascent of Hermes to the heavens and to give a vividly imaginative description of the zones of the earth as seen from there; this passage was copied by Vergil. The Erigone was a star legend dealing with the story of Icarius, his daughter Erigone, and her dog, all of whom in this version were translated to the heavens as Boötes, Virgo, and Sirius, the Dog Star. The subject matter of the third poem is unknown. Only a few fragments of Eratosthenes’ poetry are extant, and it is impossible to judge its intrinsic merit from these. 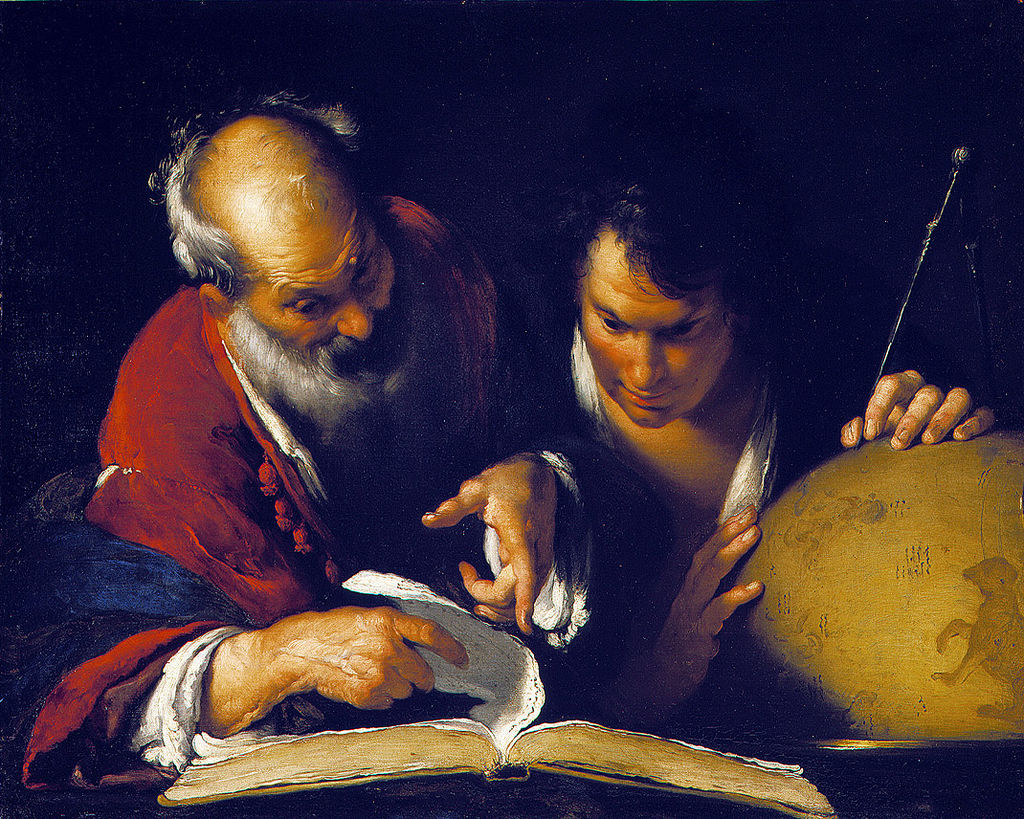 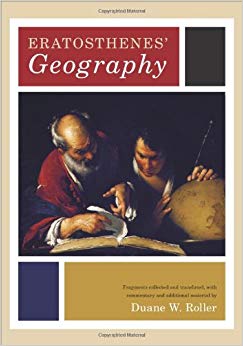 In philosophy, Eratosthenes was an eclectic and, according to Strabo, somewhat of a dilettante.

According to the Suda Lexicon, Eratosthenes was described as “All-Rounder,” “another Plato,” and “Beta” - the last possibly because, working in so many fields, he just failed to achieve the highest rank in each, or perhaps simply because he was the second chief librarian.