The 1980s saw explosive activity in the arena of corporate takeovers. In this revealing study Frank Lichtenberg uses Census Bureau and other data on hundreds of business transactions during the 1970s and 1980s to examine the effects of changes in corporate control on productivity. He concludes that the restructuring of the U.S. economy during the past decade has contributed to higher productivity and increased international competitiveness.Corporate Takeovers and Productivity examines the effects of mergers and acquisitions, in general, and leveraged buyouts, in particular on a number of important, interrelated variables: on the productivity and market share of manufacturing plants, on fixed and R&D investment, on the employment and wages of both blue- and white-collar workers, and on corporate diversification.Among Lichtenberg's findings are that the least productive plants are most likely to change owners - a change that tends to raise productivity performance; that takeovers significantly reduce the employment and wages of white-collar workers (except R&D personnel) but not of blue-collar workers; that industrial consolidation is one source of the productivity gains from takeovers; and that the U.S. LBOs and foreign mergers and acquisitions do not have the same effects as U.S. mergers and acquisitions.Frank R. Lichtenberg is Associate Professor at the Columbia University Graduate School of Business and Research Associate at the National Bureau of Economic Research.

Research economist to research associate National Bureau of Economic Research, Productivity and Technology Change, since 1980. Consultant in field; reviewer for numerous organizations and publications in field. 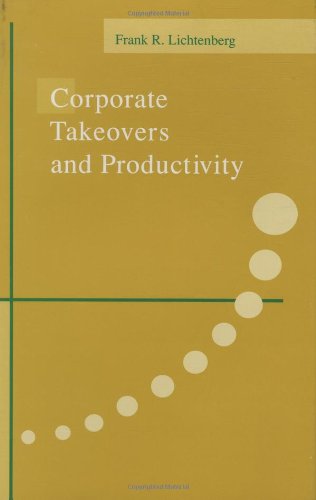