Beck was one of three children born to Bill and Mary Beck. In Beck's hometown of Mount Vernon, a largely farm community, Glenn showed an interest in radio at an early age. His curiousity was sparked on his eighth birthday, when his mother gave him a collection of shows that had been produced during the Depression. Beck loved going into his bedroom and imitating the voices he heard on the radio, recording and playing them back to himself on a small hand-held recorder.

After their mother's death, Beck and his older sister moved to their father's home in Bellingham, Washington, where Beck graduated from Sehome High School in June 1982.

In 1996, while working for a New Haven area radio station, Beck took a theology class at Yale University, with a written recommendation from Senator Joe Lieberman, a Yale alumnus who was a fan of Beck's show at the time. Beck enrolled in an "Early Christology" course but soon withdrew, marking the extent of his post-secondary education.

In 1983 he moved to Corpus Christi, Texas, to work at radio station KZFM. In mid-1985, Beck was hired away from KZFM to be the lead DJ for the morning-drive radio broadcast by WRKA in Louisville, Kentucky. His four-hour weekday show was called Captain Beck and the A-Team. Beck had a reputation as a "young up-and-comer". The show was not political and included the usual off-color antics of the genre: juvenile jokes, pranks, and impersonations. The show slipped to third in the market and Beck left abruptly in 1987 amid a dispute with WRKA management.

Months later, Beck was hired by Phoenix Top-40 station KOY-FM, then known as Y-95. Beck was partnered with Arizona native Tim Hattrick to co-host a local "morning zoo" program. During his time at Y-95, Beck cultivated a rivalry with local pop radio station KZZP and that station's morning host Bruce Kelly. Through practical jokes and publicity stunts, Beck drew criticism from the staff at Y-95 when the rivalry culminated in Beck telephoning Kelly's wife on-the-air, mocking her recent miscarriage. In 1989, Beck resigned from Y-95 to accept a job in Houston at KRBE, known as Power 104. Beck was subsequently fired in 1990 due to poor ratings.

Beck then moved on to Baltimore, Maryland, and the city's leading Top-40 station, WBSB, known as B104. There, he partnered with Pat Gray, a morning DJ. During his tenure at B104, Beck was arrested and jailed for speeding in his DeLorean. According to a former associate, Beck was "completely out of it" when a station manager went to bail him out. When Gray, then Beck were fired, the two men spent six months in Baltimore, planning their next move. In early 1992, Beck and Gray both moved to WKCI-FM (KC101), aTop-40 radio station in New Haven, Connecticut. In 1995, WKCI apologized after Beck and Gray mocked a Chinese-American caller on air who felt offended by a comedy segment by playing a gong sound effect and having executive producer Alf Gatineau mock a Chinese accent. That incident led to protests by activist groups. When Gray left the show to move to Salt Lake City, Beck continued with co-host Vinnie Penn. At the end of 1998, Beck was informed that his contract would not be renewed at the end of 1999.

The Glenn Beck Program first aired in 2000 on WFLA (AM) in Tampa, and took their afternoon time slot from eighteenth to first place within a year. In January 2002, Premiere Radio Networks launched the show nationwide on 47 stations. The show then moved to Philadelphia, Pennsylvania, broadcasting from new flagship station WPHT. On November 5, 2007, The New York Times reported that Premiere Radio Networks was extending Beck's contract. By May 2008, it had reached over 280 terrestrial stations as well as XM Satellite. It was ranked 4th in the nation with over six and a half million listeners. As of July 2013, Glenn Beck was tied for number four in the ratings behind Rush Limbaugh, Sean Hannity, and Dave Ramsey.

In January 2006, CNN's Headline News announced that Beck would host a nightly news-commentary show in their new prime-time block Headline Prime. The show, simply called Glenn Beck, aired weeknights. CNN Headline News described the show as "an unconventional look at the news of the day featuring his often amusing perspective". At the end of his tenure at CNN-HLN, Beck had the second largest audience behind Nancy Grace. In 2008, Beck won the Marconi Radio Award for Network Syndicated Personality of the Year. In October 2008, it was announced that Beck would join the Fox News Channel, leaving CNN Headline News. After moving to the Fox News Channel, Beck hosted Glenn Beck, beginning in January 2009, as well as a weekend version. One of his first guests was Alaska Governor Sarah Palin. He also has a regular segment every Friday on the Fox News Channel program The O'Reilly Factor titled "At Your Beck and Call". As of September 2009, Beck's program drew more viewers than all three of the competing time-slot shows combined on CNN, MSNBC, and HLN.

His show's high ratings did not come without controversy. The Washington Post 's Howard Kurtz reported that Beck's use of "distorted or inflammatory rhetoric" had complicated the channel's and their journalists' efforts to neutralize White House criticism that Fox is not really a news organization. Television analyst Andrew Tyndall echoed these sentiments, saying that Beck's incendiary style had created "a real crossroads for Fox News", stating "they're right on the cusp of losing their image as a news organization."

In April 2011, Fox News and Mercury Radio Arts, Beck's production company, announced that Beck would "transition off of his daily program" on Fox News in 2011. His last day at Fox was later announced as June 30. FNC and Beck announced that he would be teaming with Fox to produce a slate of projects for Fox News and its digital properties. Fox News head Roger Ailes later referenced Beck's entrepreneurialism and political movement activism, saying, "His [Beck's] goals were different from our goals ... I need people focused on a daily television show." Beck hosted his last daily show on Fox on June 30, 2011, where he recounted the accomplishments of the show and said, "This show has become a movement. It's not a TV show, and that's why it doesn't belong on television anymore. It belongs in your homes. It belongs in your neighborhoods." In response to critics who said he was fired, Beck pointed out that his final show was airing live. Immediately after the show, he did an interview on his new GBTV internet television channel.

Glenn Beck's Fox News one-hour show ended June 30, 2011, and a new two-hour show began his television network which started as a subscription-based internet TV network, The Blaze TV, originally called GBTV, on September 12, 2011. Using a subscription model, it was estimated Beck is on track to generate $27 million in his first year of operation. This was later upgraded to $40 million by The Wall Street Journal when subscriptions topped 300,000. On September 12, 2012, The Blaze TV announced that the Dish Network would begin carrying The Blaze TV. The Blaze is currently available on over 90 television providers, with eleven of those being in the national top 25. 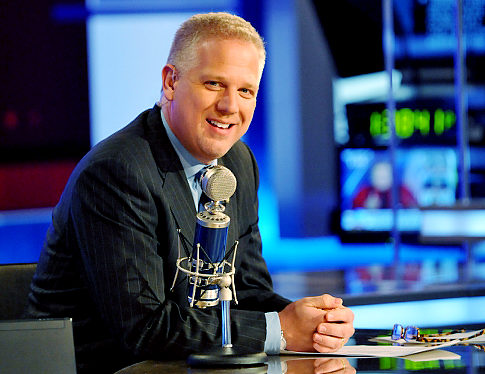 He belongs to the Church of Jesus Christ of Latter-day Saints (Mormon), but he was raised Roman Catholic. Beck is an ordained minister with the Universal Life Church Monastery

Beck has described himself as a conservative with libertarian leanings. Beck supported Republicans, but on March 18, 2015 he left the Republican Party, saying that the GOP had failed to effectively stand against the president on Obamacare and immigration reform, and because of the GOP establishment’s opposition to insurgent lawmakers such as Mike Lee and Ted Cruz.

Glenn Beck was married to his first wife Claire, who he met while working at WPGC, they got married in 1983 and divorced in 1994, from their marriage daughters Hannah (b. 1991) and Mary (b. 1988) were born. Tania Colonna became Tania Beck in January, 2000, they have been blessed with two more children Cheyenne Grace Beck (b. 2006) and their handsome son Raphe Beck who they adopted in 2004.