Addresses and Papers of James B. Eads: Together with a Biographical Sketch

James Buchanan Eads was an American engineer and inventor with international reputation; his advice was sought not only by many municipalities in the United States but by foreign governments as well.

He made plans for the improvement of the harbor of Toronto; advised on improvements for the harbors of Vera Cruz and Tampico; served in an advisory capacity to the Mersey Docks and Harbor Board of Liverpool, and many others.

James Buchanan Eads was born on May 23, 1820 in Lawrenceburg, Indiana, United States, the son of Thomas C. and Ann (Buchanan) Eads. Thomas Eads was a merchant but never a very prosperous one, and in the hope of bettering his condition periodically moved from one town to another. When James was three years old the family moved to Cincinnati; when he was nine, to Louisville; and when he was thirteen, finally settled in St. Louis, Missouri.

His forebears were English and Irish gentlefolk, the Eads having settled first in Maryland, while his mother’s people hailed from Ireland.

His schooling ceased because of the immediate necessity of helping to support the family.

He first peddled apples on the street, but in a short time entered the dry-goods store of Williams & Durings as clerk, and through the kindness of Mr. Williams spent most of his spare time in the latter’s library.

Five years later, in 1838, he became a purser on a Mississippi River steamboat.

In this work he had the opportunity to satisfy somewhat his boyish interest in machinery and also to recognize the economic importance of reducing the heavy losses in boats and cargoes.

For three years, therefore, while steaming up and down between St. Louis and New Orleans, he concentrated, his attention on the invention of a diving bell.

He patented it, and in 1842 gave up his purser’s job and formed a partnership to engage in steamboat salvaging.

The business was successful from the start.

Eads personally supervised every job and was as often on the river bottom within his diving bell as on the bell tender.

He continued in this work for three years and then sold his interest and organized a glass manufactory in St. Louis, the first west of the Ohio River.

With $1, 500 advanced by his creditors, he then returned to the wrecking business and by 1857 had not only paid off his indebtedness but also had amassed a fortune which enabled him to give up an occupation requiring almost continual absence from home.

During his twelve years on the river he had become more and more interested in the study of the laws which governed its flow and determined its deposits, and had become thoroughly satisfied in his own mind as to the proper manner of combating the destructive action not only of the Mississippi but of all rivers.

As early as 1856 he proposed to Congress to remove all snags and wrecks from the Mississippi, Missouri, Arkansas, and Ohio rivers and to keep their channels open for a term of years, but the bill authorizing such action died in the Senate.

From 1857 to 1861 Eads lived in semi-retirement in the happy environment of his family, even indulging in a trip to Europe.

In the latter year, however, he was summoned to Washington by President Lincoln to advise with him upon the best methods of utilizing the western rivers for attack and defense.

He proposed a fleet of armor-plated, steam-propelled gunboats, of special construction to ward off shell fire, and when the government advertised for bids he submitted one in which he contracted to construct seven of these vessels of 600 tons each, ready for armament in sixty-five days.

It was the contract of a bold and self-reliant man and seemingly impossible of execution in view of the existing chaotic industrial conditions; but within two weeks, over four thousand men, scattered all over the country, were engaged in various details of construction, and in forty-five days the first of the seven gunboats, the St. Louis, with her boilers and engines aboard, was launched.

The other six followed in quick succession, while an eighth - one of Ead’s wrecking boats - was rebuilt to incorporate his steam- operated gun mounting.

His was a most heroic undertaking, and before it was completed his health became seriously impaired, but his indomitable spirit pulled him through, and by 1865 he was again physically fit.

In that year a bill was introduced into Congress authorizing the construction of a bridge across the Mississippi at St. Louis.

When the bill was passed it was amended so as to call for a 500-foot centre span and fifty feet of clearance.

The project was thought to be impracticable and was so pronounced by a group of twenty-seven of the leading civil engineers in the country.

Eads, however, who had been selected by one of the construction companies as its engineer, thought otherwise; and when his plan was finally approved in 1867 he proceeded with the construction of the bridge and successfully completed it in 1874.

It is of steel and masonry construction and its center span is 520 feet long.

The base of one pier is 136 feet below high water and was sunk through ninety feet of sand and gravel to bedrock.

The conditions encountered during the construction were so extraordinary in many respects that only an inventive genius such as Eads possessed could provide the many appliances needed for the subaqueous work and for the superstructure.

Hardly had this work been completed when, in February 1874, Eads made a formal proposition to Congress to open one of the mouths of the Mississippi River into the Gulf and maintain the channel, agreeing to do it at the sole risk of himself and his associates.

The proposition was attacked chiefly by army engineers, but after a considerable fight the proposal was accepted, Eads’s work to be confined, however, to the small South Pass.

Here he had his most desired opportunity to apply his knowledge of the river’s currents, and by a system of jetties so arranged that the river deposited its sediments where he wanted them, he successfully accomplished the task four years later, in 1879. This achievement placed him in the foremost rank of hydraulic engineers as his great bridge had placed him in the first rank of bridge engineers.

The year this work was finished the first meeting of the Panama Canal Congress was held.

Eads was opposed to a canal and conceived the idea of a ship railway.

He obtained a valuable concession from the Mexican government for building the railway and proposed to Congress to build it at his own expense, provided the government would guarantee a dividend of six per cent for fifteen years when it had been proven practical.

A bill embodying his suggestion passed the House but failed in the Senate.

In 1885 he introduced a new bill in Congress, modified as a result of additional concessions granted by Mexico, and he spent considerable time in Washington for the next two years doing what he could to bring about passage of the bill.

His health was far from good, however, and on the advice of physicians, in January 1887 he went to Nassau, Bahama Islands, where he died three months later.

Some of his writings, edited by Estill McHenry, were published in 1884 under the title, Addresses and Papers of James B. Eads. 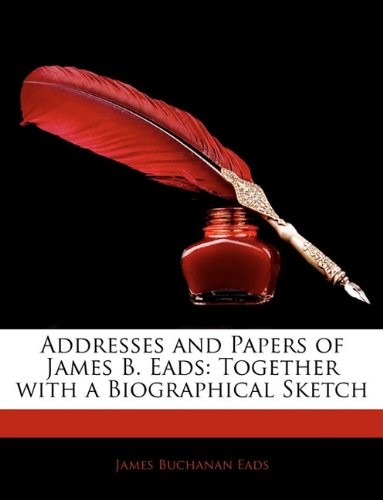 He was a member of the American Society of Civil Engineers, and vicepresident in 1882; a fellow of the American Association for the Advancement of Science ; a member of the British Institution of Civil Engineers, and of the British Association. Some of his writings, edited by Estill McHenry, were published in 1884 under the title, Addresses and Papers of James B. Eads.

He was a bold and self-reliant man.

He was twice married, first to Martha Dillon of St. Louis, who died in 1855 leaving him with two daughters, and two years after her death, to Eunice Eads, the widow of his cousin Elijah, who had three daughters.