Stephen John "Steve" Nash is a point guard for the Los Angeles Lakers. A two-time NBA MVP, Nash has been regarded as one of the best players at his position during his career.

Ethnicity: Steve Nash was born in Johannesburg, South Africa. His mother is Welsh and father is English.

Nash was born on February 7, 1974 in Johannesburg, South Africa. His father John was a professional soccer player and Nash's first word was "goal." At a very young age the family moved to Canada- first to Regina, then Vancouver, until they settled in Victoria. Nash was raised in Canada and attended college at Santa Clara University before being drafted by the Phoenix Suns. He spent the early part of his prime with the Dallas Mavericks, where he teamed with Dirk Nowitzki to form one of the best offenses in the NBA. After returning to Phoenix in 2004, Nash won back-to-back NBA MVP awards, cementing his place in NBA history. 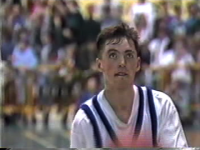 In the 1996 NBA Draft the Phoenix Suns selected Nash 15th overall, but on a roster that included Kevin Johnson and Jason Kidd there was little playing time available to Nash. For the season, Nash averaged 10.5 minutes per game and 2.1 assists. Nash increased his minutes per game in 1997-98 to 21.9, averaging 9.1 PPG, 3.4 APG and shooting 41.5% from 3-point range. Still, Nash was being used mostly in a complementary role. During the 1998 NBA Draft the Phoenix Suns dealt Nash to the Mavericks for their 1999 first-round draft pick, Martin Muursepp, Pat Garrity and Bubba Wells. The Mavericks also acquired Dirk Nowitzki during another draft-day trade.

In the 2000-01 season, despite only making 27 starts the previous year, Nash started all 70 games he appeared in - he was forced to miss 10 games due to a sore left hamstring. Nash finished third in Most Improved Player award voting. He averaged almost double his career high in points with 15.6 PPG, dished out 7.3 APG and shot 48.7% from the field. His 89.5% free throw percentage was also fourth in the league. 14 times he dished out 10 or more assists. Along with Michael Finley and Nowitzki the Mavericks became a force in the Western Conference. After winning 53 regular season games the Mavericks took down Karl Malone and the Utah Jazz in the first round of the NBA playoffs, an impressive franchise achievement considering the Mavericks had just gone the entire decade of the 90's without a single playoff win. The Mavericks lost to the San Antonio Spurs in five games in the following round.

The next season Nash started all 82 games and averaged career-highs with 17.9 PPG and 7.7 APG. He also shot 45.5% from 3-point range. He was selected to his first All-Star game and helped the Mavericks win a franchise-record of 57 regular-season games. In the first round of the playoffs the Mavericks swept the Timberwolves, but fell to the Kings 4-1 in the Western Conference Semifinals. Nash averaged 19.5 PPG and 8.75 APG during the playoffs.

By averaging 17.7 PPG and 7.3 APG, Nash helped the Mavericks set another franchise-record in the 2002-03 season by winning 60 regular-season games. The team's 103.0 points per game was also tops in the entire NBA. The Mavericks stormed all the way to the Western Conference Finals before losing to the San Antonio Spurs 4-2.

In 2003-04 Nash ranked third in the league in assists with 8.8 per game, and second in free throw percentage at 91.6%. The Mavericks led all teams with 105.2 points scored per game and posted a 36-5 record at home. Over the final 32 games, Nash averaged 10.0 APG helping to lead the Mavericks to their fourth straight 50+ win season. The Mavericks bowed out early in the playoffs, losing in the first round to the Sacramento Kings. With Steve Nash's contract coming to an end the Mavericks sent a strong message about their future during the 2004 NBA Draft when they acquired the No. 5 pick point-guard Devin Harris from Washington.

The Suns reacquired Nash as a free agent and subsequently had a complete turnaround in their franchise's fortunes with him running the point and Mike D'Antoni as head coach. In 2003-04 the Suns won only 29 games and averaged 94.2 PPG. In 2004-05 the Suns led the league with 62 wins and averaged 110.4 PPG. Nash averaged 15.5 PPG, a league-high 11.5 APG, and shot 50.2% from the field and 43.1% from 3-point range. He handed out 10 or more assists 59 times. His 11.5 APG was the highest average since John Stockton in 1994-95, and the second highest assist average in franchise history. He was also one of only three guards to shoot over 50% from the field. He was named for the first time to First Team All-NBA and was named to his third All-Star game. Nash joined Bob Cousy, Oscar Robertson, Magic Johnson, Michael Jordan and Allen Iverson as the only guards to have ever been named league MVP and joined Hakeem Olajuwon as the only other international player to receive the honor. In the playoffs he was even more spectacular, averaging 23.9 PPG, 11.3 APG, 4.8 RPG while shooting 52% from the field. In the first round the Suns swept the Grizzlies which set up a matchup of Nash versus his old team in the Mavericks. With the series tied 1-1 in Game 3, Nash went out and scored 27 points with 17 assists in a 119-102 win at Dallas. In Game 4 the Suns lost, but Nash scored a career-high 48 points on 20 of 28 shooting from the field. His 48 points were the second-highest point total in Suns playoff history. In a Game 5 win, Nash had 34 points, 13 rebounds and 12 assists. In Game 6, Nash scored 39 points, dished out 12 assists, pulled down nine rebounds and hit five three-pointers in a series-clinching 130-126 overtime win at Dallas. Despite his heroics against Dallas, the Suns lost to the Spurs in five games in the Western Conference Finals.

In the 2005-06 season Nash averaged 18.8 PPG and a league-leading 10.5 APG. He also shot 51.2% from the field, 43.9% from 3-point range and his 92.1% at the charity stripe led the league and was a franchise-record. Again Nash was selected an All-Star and First Team All-NBA. He also won his second consecutive NBA MVP award, becoming only the ninth player ever to win the award consecutively and only the third guard to do so. The Suns led the league averaging 108.4 PPG. It was the fifth consecutive season which a Nash-led team had done so. In the playoffs he became just the third player to record double figures in assists in seven straight post-season games. Again the Suns made it to the Western Conference Finals, this time setting up a rematch versus the Mavericks. In a Game 1 win, Nash scored 27 points on 11 of 18 shooting and dished out 16 assists. This time the Suns lost to the Mavericks in six games. For the entire playoffs Nash averaged 20.4 PPG and 10.2 APG.

The next season Nash again led the NBA with 11.6 APG, becoming just the fifth player in NBA history to lead the league in assists in at least three consecutive seasons. By averaging 18.6 PPG he became the last player since Magic Johnson to average at least 18 points and 11 assists. His 53.2% field goal percentage was tops for all NBA guards. Nash also hit 156 three-pointers on 45.5% shooting. Nash was selected to his fifth All-Star team and along with Amar'e Stoudemire became the first pair of teammates in franchise history to be selected together First Team All-NBA. Again, the Suns led the league in scoring with 110.2 PPG and they won 61 regular-season games. Nash finished second in MVP voting to former teammate Dirk Nowitzki. In the first round of the playoffs versus the Lakers in Game 4, Nash dished out a career-high 23 assists - he was one shy of the NBA playoff record. The Suns lost in six games to the San Antonio Spurs in the Western Conference Semifinals.

In the 2007-08 season, the Suns began to shake up the roster around Nash, trading Shawn Marion to the Miami Heat mid-season to acquire center Shaquille O'Neal. Nash continued to have individual success, averaging 16.9 PPG, 11.1 APG, shooting 90.6% at the free-throw line and making a career high 179 three-pointers at a 47% clip. He was selected to his sixth All-Star team and made Second Team All-NBA. The Suns averaged 110.1 PPG and won 55 games but fell once again to the San Antonio Spurs - this time in five games and in the opening round.

With Shaquille O'Neal at center from the start of the season in 2008-09 and coach Mike D'Antoni replaced with Terry Porter, the Suns faltered. They continued to trade players around Nash, and eventually replaced Porter with Alvin Gentry. Phoenix finished the season winning only 46 games, missing the playoffs for the first time in Nash's second stint with the team. The roster shakeup continued in the summer of 2009, with O'Neal shipped to the Cavaliers. However, Nash decided to sign a two-year contract extension, keeping him in Phoenix through 2012. The Suns responded by winning eight of their first nine games of the season, and Nash earned a starting spot in the All-Star Game. The Suns returned to the playoffs, where they reached the conference finals before losing to the eventual champion Lakers.

The following season, more roster changes were made, as Nash remained the one constant. However, success was hard to come by, as the Suns finished 40-42, their worst record since the season before Nash arrived back in Phoenix. For the second time in three years, Nash was unable to carry the team into the postseason. The Suns missed the playoffs again in the lockout-shortened 2011-12 season, finishing with a 33-33 record. Nash did make his eighth All-Star appearance, playing in the game for the first time since 2010.

Nash became a free agent following the 2011-12 season. He was courted by multiple teams, including the Toronto Raptors and New York Knicks. However, Nash ended up agreeing to a sign-and-trade deal that sent him from Phoenix to the L.A. Lakers in exchange for four draft picks. Nash's new contract was for three years and $27 million. With the Lakers, Nash was forced to change his jersey number from his familiar 13 to 10. Despite being reunited with Mike D'Antoni -- who took over after Mike Brown was fired just five games into the season -- Nash struggled in his first season in Los Angeles. He averaged just 6.7 assists per game, his lowest total since 1999-00, as he battled injuries. 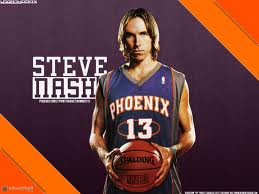