(In an exciting reinterpretation of the early nineteenth c...)

In an exciting reinterpretation of the early nineteenth century, Leo Hirrel demonstrates the importance of religious ideas by exploring the relationship between religion and reform efforts during a crucial period in American history. The result is a work that moves the history of antebellum reform to a higher level of sophistication. Hirrel focuses upon New School Congregationalists and Presbyterians who served at the forefront of reform efforts and provided critical leadership to anti-Catholic, temperance, antislavery, and missionary movements. Their religion was an attempt to reconcile traditional Calvinist language with the prevalent intellectual trends of the time. New School theologians preserved Calvinist language about depravity, but they incorporated an assertion of nominal human ability to overcome sin and a belief in the fixed, immutable nature of truth. Describing both the origins of New School Calvinism and the specific reform activities that grew out of these beliefs, Hirrel provides a fresh perspective on the historical background of religious controversies.

Hirrel, Leo P. was born on December 31, 1952 in Alexandria, Virginia, United States. Son of Michael A. and Evelyn L. Hirrel. 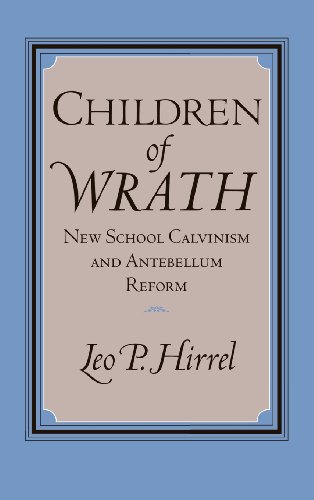