Sapieha's son Andrzej, the Great Royal Deputy Cup-bearer of Lithuania, castellan of Minsk, and Voivode of Polotsk and Smolensk.

Władyslaw IV Vasa, Polish prince from the Royal House of Vasa. He reigned as King of Poland and Grand Duke of Lithuania from 8 November 1632 to his death in 1648.

Lew Sapieha was born on April 4, 1557, in the village Astroŭna, near Vitebsk (now in the Beshankovichy district of Vitsebsk Region), at that time Grand Duchy of Lithuania, to a family of magnates, whose influential connections and rich estates enabled the talented young man to start a brilliant career.

Lew Sapieha was a son of Ivan Ivanavich Sapieha (died 1580), the Starosta (major) of Daragichyn and Voivode (general, head of the region) in Padlyassie (which is currently the region of Poland). His mother was countess Bagdana Drucka-Sakalinskaya (died 1584). He had two brothers: Grygor (served as Padkamory (secretary) in Orsha, died in1600) and Andrej (Starosta in Orsha, then Kashtalyan (treasurer) in Vitsebsk and Voivode in Mscislau; died in 1611). He had also 3 sisters.

Parents sent Leu for education and up-bringing to the court of Mikolaj Radziwill the Black, the Governor of Vilna Province and Chancellor of the GDL. In 1570, together with the son of Radziwill, he went to study in Germany, where he became a student of Leipzig University. There, under the influence of Reformation, he renounced his Orthodox belief and joined Protestantism (Calvinism). He returned home in 1573 with a profound knowledge of the law, foreign languages and Latin, and was admitted to the Court of the King and Grand Prince of Lithuania Stefan Batory.

Lew Sapieha returned from abroad during the reign of the glorious King of Poland and Grand Duke of Lithuania Stefan Bathory. Sapieha was participating in the request of his father and was forced to present it to the King Bathory. Since Bathory was not fluent neither in Polish nor in Old Belarusian, Sapieha talked to him in Latin. This made Bathory notice a young man and Sapieha received a position of the Secretary of the Grand Duchy of Lithuania when he was only 23.

At this time, the Muscovy tsar Ivan the Terrible has started a war against the Grand Duchy of Lithuania. Young Sapieha formed at his own cost a hussar regiment and distinguished himself in the battles at Velikie Luki and during the Pskov siege. In 1548, Lew Sapieha was sent as an ambassador to Moscow. He didn’t reach tsar Ivan the Terrible. The latter died. Sapieha signed a 10-year peace treaty. By this treaty, Muscovy kept Smalensk, but left Polacak, Vyalizh, and Infland. 16 years later Sapieha was sent again to Moscow by king Zhygimont. At this time, he signed a 20-year peace treaty with Boris Godunov.

After signing his first treaty, Sapieha received the vast lands of Slonim (1586) and became a Vice-Chancellor of the Grand Duchy of Lithuania. Lew Sapieha used his influence to support the election of Sigismund II Augustus (Swedish prince) as the King of the Polish–Lithuanian Commonwealth. Kings were elected there by Sejm - meeting of the aristocracy. After that, King Sigismund II Augustus ordered to Lew Sapieha to compile all acting laws in the state into one Statute that would be obligatory around all-state. This work of Vice-Chancellor Sapieha was approved two years later by the Sejm in Warsaw under the title "Statut Vyalikaga Knyazstva Litovskogo" - "Statute of the Grand Duchy of Lithuania". Sapieha printed the Statute at his own cost in the same1588. He laid grounds for the establishment of the Law Faculty at the University of Vilnius, which was created in 1641.

In 1621, at the very heart of struggles between Eastern Orthodox Christians headed by Vitsebsk Orthodox priest Meleci Smatrycki and Greek Catholic (Uniate) Christians headed by archbishop Iozafat Kuncevich, Lew Sapieha wrote his famous letter to Iozafat Kuncevich. Sapieha supported the Unitarianism in that letter as the independent Belarusian religion, warned Kuncevich against forcing people into it. He reminded that the unity of Christians in their beliefs should be made by Christian love, not by arms, not by destroying Orthodox churches. 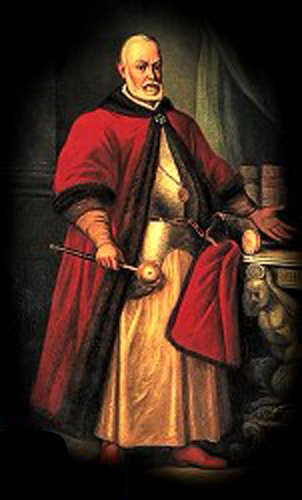 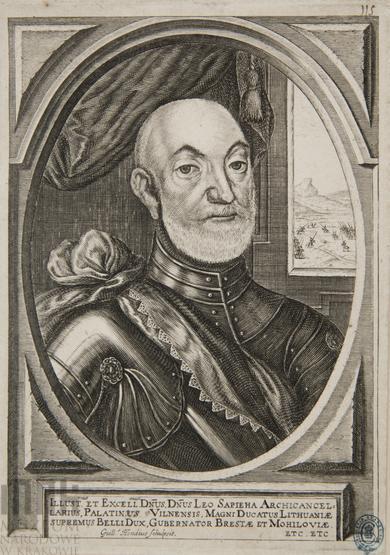 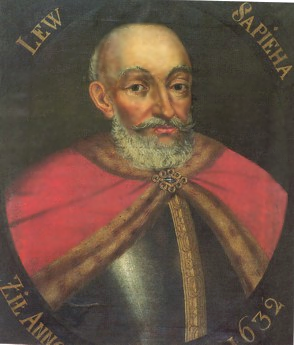 Sapieha supported the Uniates in that letter as the independent Belarusian religion warned Kuncevich against forcing people into it. He reminded that the unity of Christians in their beliefs should be made by christian love, not by arms, not by destroying Orthodox churches.

In the Statute, Sapieha insisted on the same laws for both the ruling class and common people. Lew Sapieha fought for man's independence and freedom and he understood freedom as life in accordance with the laws. He was quite democratic in his views. Many of his ideas were later developed by the politicians of Western Europe.

Quotations: "The state, in which the stupid majority rules, will not exist long."

“We have the rights written in our own native language and that is why we always know what to say to resist to any offense.”

“Every person, boasting his freedom and refusing to know and understand the rights protecting his liberty, should be ashamed.”

“The state under the rule of law must be governed by the law, not a person.”

“The law is established to prevent every strong and having power person from doing whatever he wants.”