It has been customary to identify Macrobius with one of three officials by that name mentioned in the Codex Theodosianus as serving in 399/400, 410, and 422. A serious objection to these identifications is that Macrobius would thus have been known by the name Theodosius, and not as Macrobius. Moreover, internal evidence in the Saturnalia, his larger extant work, suggests a date of composition in the 430s, rather than at the close of the fourth century. The only official named Theodosius recorded as holding office during this period was a prefect of Italy in 430, and this identification is therefore accordingly proposed.

The Saturnalia, Macrobius’s encyclopedic celebration of Roman culture written in the early fifth century, has been prized since the Renaissance as a treasure trove of otherwise unattested lore. Cast in the form of a dialogue, the Saturnalia treats subjects as diverse as the divinity of the Sun and the quirks of human digestion while showcasing Virgil as the master of all human knowledge from diction and rhetoric to philosophy and religion. The new Latin text is based on a refined understanding of the medieval tradition and improves on Willis’s standard edition in nearly 300 places. The accompanying translation - only the second in English and the only one now in print - offers a clear and sprightly rendition of Macrobius’s ornate Latin and is supplemented by ample annotation. A full introduction places the work in its cultural context and analyzes its construction, while indexes of names, subjects, and ancient works cited in both text and notes make the work more readily accessible than ever before.

Commentary on the Dream of Scipio by Macrobius

Ambrosius Theodosius Macrobius is a fifth-century Latin grammarian and philosopher. His most important work is the Saturnalia, the last known example of the long series of symposia headed by the Symposium of Plato.

No contemporary records contain any information about Macrobius' early life and education.

It has been customary to identify Macrobius with one of three officials by that name mentioned in the Codex Theodosianus as serving in 399/400, 410, and 422. A serious objection to these identifications is that Macrobius would thus have been known by the name Theodosius, and not as Macrobius. Moreover, internal evidence in the Saturnalia, his larger extant work, suggests a date of composition in the 430s, rather than at the close of the fourth century. The only official named Theodosius recorded as holding office during this period was a prefect of Italy in 430, and this identification is therefore accordingly proposed. 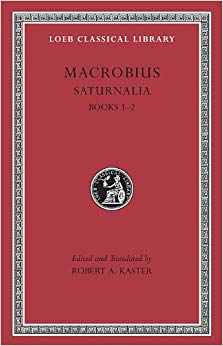 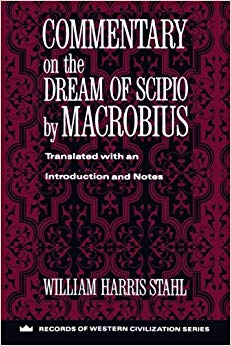 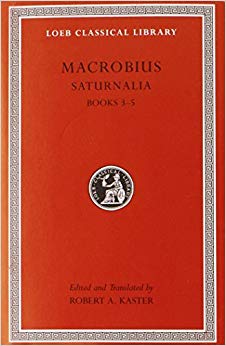 It is unlikely that he was a Christian since his works are entirely pagan. All his theology derives from the cult of the sun. His treatise comparing Greek and Latin verbs, dedicated to Symmachus, is known by excerpts in the works of a certain John, perhaps Scotus Erigena. Modern readers have assumed the Saturnalia to be a showcase for pagan culture, according to some nothing less than a work of pagan propaganda. Indeed, the study of the Saturnalia has overlapped with the study of what has become known as the “pagan revival” of the late 4th century. Those gathered in Macrobius's pages have been identified as the circle of Symmachus - or (as some prefer) the circle of Praetextatus. It was long taken for granted that Macrobius was himself a member of this circle. This chapter considers whether he even was a contemporary when he lived, and what was the purpose of his work was.

The title of Macrobius’ work, his commentary on Cicero’s Somnium Scipionis, thinly disguises its actual contents. Macrobius uses passages of Cicero’s work as mere suggestions to construct a treatise on Neoplatonic philosophy-the most satisfactory and widely read Latin compendium on Neoplatonism that existed during the Middle Ages. Macrobius shows little respect for Aristotle and defends Platonism, which was for him a religion gleaned probably from Porphyry. The work, which was long popular as a source for data on many topics, accepts the Stoic division of moral, physical, and rational philosophy. Like Somnium Scipionis, Macrobius’ Commentarii is in the tradition of Plato’s Timaeus; Macrobius’ main source appears to have been Porphyry’s lost commentary on the Timaeus; and Cicero himself was probably inspired by Posidonius’ lost commentary on the Timaeus.

Macrobius’ lengthy excursuses on Pythagorean number lore, cosmography, world geography, and the harmony of the spheres established him as one of the leading popularizers of science in the Latin West. His chapters on numbers consist largely of conventional statements about the virtues of the numbers within the sacred Pythagorean decade but include a fine explanation of the Pythagorean doctrine that numbers underlie all physical objects.

Macrobius’ excursus on the heavens presents the stock features of popular handbooks on astronomy. Spherical earth at the center of a spherical universe is encircled by seven planetary spheres and a celestial sphere which rotates diurnally from east to west. The planets have proper motions from west to east in addition to their more apparent motions from east to west, the result of their being “dragged along” by the rotation of the celestial sphere, The celestial circles are defined, with particular attention to the Milky Way, the dramatic setting of Scipio’s dream. When Macrobius discusses the order of the planets, he is purposely ambiguous because his two infallible authorities, Plato and Cicero, differ about the position of the sun. Macrobius’ vague statement about the upper and lower courses of Venus and Mercury has been misinterpreted since the Middle Ages as an exposition of Heraclides’ geoheliocentric theory.

Macrobius and Martianus Capella were largely responsible for preserving Crates of Mallos’ theory of an equatorial and meridional ocean dividing the earth into four quarters, each of which was assumed to be inhabited, and for the wide adoption of Eratosthenes’ figure of 252,000 stades for the circumference of the earth. These concepts dominated scientific thinking on world geography in the Middle Ages.