Our Towns : a Close Up / a Study Made in 1939-42...by the Hygiene Committee of the Women's Group on Public Welfare (In Association with the National Council of Social Service) ; with a Preface by Margaret Bondfield

Margaret Grace Bondfield, a British union official and political leader, was a prominent figure in British labor union leadership and progressive political movements in the first half of the twentieth century. She was a lifelong advocate of improving the lives of working women, working toward this goal in her roles as a labor activist, suffragist, and politician.

Bondfield was born on March 17, 1873, in Chard, Somerset, England. She was the second youngest child of 11 in the family of William and Ann Bondfield. Both sides of her family had an interest in political activism. Bondfield's father was a foreman at a lace company by trade, but had participated in the working-class struggle for political reform known as the Chartist movement; he had also joined the Anti-Corn Law League to fight taxes on grain. Her maternal grandfather was George Taylor, a Congregationalist minister who was active in social and political issues.

Bondfield attended the local school until she was 13. Bondfield was awarded an honorary Doctor of Laws degree by the University of Bristol.

When 13, Margaret moved to Brighton to stay with family members and find work. There she lived a strenuous life as a shop assistant, working 65 hours a week and living in quarters over the shop. Her prospects improved when a women's rights advocate by the name of Hilda Martindale took an interest in the young woman and helped her continue her education.

In 1894, when she was 21, Bondfield moved to London, where her brother Frank lived. Frank had become a printer and a trade union activist, and through him she became acquainted with a number of people and organizations promoting unions and socialism. After meeting the socialists Sidney and Beatrice Webb, Bondfield joined their moderately leftist group known as the Fabian Society. She also became a member of the Independent Labour Party at this time, establishing friendships and political connections with future prime minister Ramsay MacDonald and his wife-to-be, Margaret Gladstone. A third area she entered at this time was the world of trade unionism, which she began to support after meeting James McPherson, the secretary of the Shop Assistants' Union.

The Shop Assistants' Union admitted both male and female members, and it also worked in conjunction with the Women's Trade Union League (WTUL). Bondfield quickly moved into positions of authority in both organizations: she was elected to the National Executive Council of the Shop Assistants' Union in 1897 and served on the General Committee of the WTUL. From 1896 to 1898 she helped compile a survey of working conditions of shop assistants for another group, the Women's Industrial Council. The findings in the report eventually led to the passage of bills regulating the length of work days in the early 1900s.

Bondfield's familiarity with the plight of shop assistants and her ability to clearly communicate the concerns of the group led to her selection as assistant secretary of the Shop Assistant's Union in 1898. She held this position for the next 10 years. In her role as assistant secretary of the union, Bondfield traveled around the British Isles, giving lectures and recruiting new members. One of the people she convinced to support the union cause was Mary MacArthur, a woman she met in Glasgow who would become one of her closest friends. Together, the two worked on a number of issues relating to women in the workplace. At Bondfield's suggestion, MacArthur was named secretary of the WTUL, and in 1906 MacArthur founded the first union for women of all trades, the National Federation of Women Workers (NFWW). With MacArthur and others, Bondfield helped win support for the Trade Boards Act of 1909. This bill established a minimum wage in four of the main industries employing women.

During the same time period, Bondfield also expressed her feminist views by joining the suffrage movement, serving as president of the Adult Suffrage Society from 1906 to 1909. Her organization supported giving the right to vote to all adults and clashed with other groups who were willing to accept various limitations on voter eligibility. Ultimately, Bondfield gave her support to the restricted suffrage offered in the Suffrage Act of 1918, which only gave women the right to vote if they were the head of a household and over 30 years of age. In the 1920s, however, she renewed her fight for suffrage for all adult women.

In addition to her many union and political activities in the first decade of the century, Bondfield conducted studies of labor issues in American industries in Chicago, Illinois, and Lawrence, Massachusetts, in 1910. Back in England, she returned to her lecture tours until suffering from a physical collapse. In order to regain her health, she resigned from her office in the Shop Assistants' Union and refrained from all work for the next two years.

In the fall of 1912, she returned to her campaign for the rights of women workers, lobbying for a better minimum wage law and adequate provisions for maternity and child care.

During the years of World War I, Bondfield devoted most of her energy to serving as the organizing secretary of the NFWW. She also, however, served on a number of wartime committees devoted to working-class issues, particularly demands on labor by the government. In addition, she became a dedicated pacifist; her views did not find favor with the British government, which in 1917 denied her permission to travel to peace conferences in Stockholm and the Hague.

After the war, Bondfield was caught up in a struggle to maintain her authority in the unions when the NFWW was merged with the National Union of General and Municipal Workers (NUGMW). In the years that followed, the NUGMW gradually reduced the number of posts available to women. When it became apparent in 1923 that Bondfield's position was being reduced to that of a powerless token female in the union hierarchy, she rebelled and declared she would quit. The leadership acceded to her demands and gave her the responsibility of overseeing all national women's issues. The same year, she became the first woman to chair the Trades Union Congress (TUC) General Council.

Bondfield increased the scope of her political work when she was elected to Parliament from Northampton in 1923. During her first year in the government, she became parliamentary secretary to the Labour party's minister of labour, Thomas Shaw. She was defeated for her seat in 1924, but returned to Parliament in 1926. At that time, she became the target of much criticism from the unions, extremists in the Labour party, and her local voters when she gave her approval to a government plan to lower some unemployment benefits. Bondfield survived this political crisis after appearing before the various groups and defending her position.

After her reelection to Parliament in 1929, Bondfield became the first woman to hold a cabinet post in the British government when she was named minister of labour by Ramsay MacDonald. Her assumption of this duty came of the eve of the economic depression of the 1930s. When unemployment reached record numbers in the first half of 1930, Bondfield successfully fought for more funds for unemployment and for more relaxed standards for who could receive compensation. Her stay in office was short lived, however. After MacDonald switched political affiliations and formed the National government, Bondfield remained a member of the Labour Party. She lost her reelection bid in 1931 and was again unsuccessful in 1935. In the years that followed she also was voted out of the TUC General Council and she retired from her post at the NUGMW.

While her days as a prominent figure in trade unions and national politics were over, Bondfield continued working on her lifelong crusade for improvements in women's social and economic status. Her efforts included the founding of the Women's Group on Public Welfare in 1938, a group she served as president for the years 1938 to 1945. During World War II, she took on some wartime duties, undertaking a lecture tour of the United States with the support of the British Information Services and serving as an organizer for civilian evacuation systems. This level of energy and involvement in her later years was a reflection of the determined spirit that had carried her on an impressive journey from the anonymity of a young shop assistant to one of the most powerful figures in the national government. 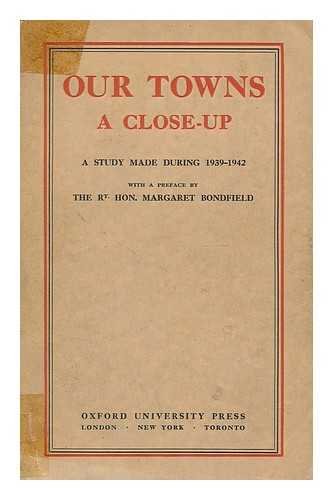 Margaret Grace Bondfield was a member of the Fabian Society and of the Independent Labour Party.

In her political work, she promoted better working conditions for women and voting rights for all adults. While her actions as a politician sometimes conflicted with the views of her fellow union leaders, her focus remained on the economic and social welfare of women throughout her career.

She was a member of the Shop Assistants' Union, the Women's Trade Union League, the National Federation of Women Workers and the Adult Suffrage Society.

She was never married.