Labor and industrial relations have attracted widespread interest in recent years. Yet in spite of the growing interest in the subject, labor relations continue to be grouped under such fields as economics, history, law, political science, psychology, and sociology making critical examination of the subject quite complex. The purpose of this book is to make this research easier by bringing together a vast array of logically arranged bibliographical information on labor and industrial relations from other disciplines; thus, filling a gap in labor relations bibliography. This work is an invaluable reference tool for those engaged in research on labor and industrial relations. The main section of this book is an annotated bibilography of English-language serials and journals on labor and industrial relations. The bibliography includes traditional academic journals, newsletters, newspapers, and bulletins. For easy access, this work is arranged in a numbered alphabetic sequence. An annotation is included with each bibliography entry to help the reader ascertain the flavor and scope of the articles each serial covers. There is also a full subject index, a publisher's index, geographical index, and title (previous and current) index. 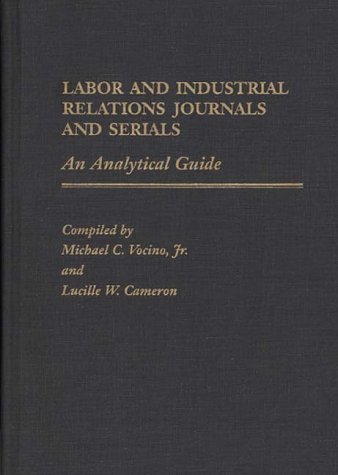