(This is the true story of two of Chicago's most powerful ...)

This is the true story of two of Chicago's most powerful and dangerous organized crime bosses. Paul Ricca and Tony Accardo were at Al "Scareface" Capone's side when he formed the Chicago Mob. Ricca and Accardo used people and governments to make billions using illegal operations, while preying on the unfortunate and weak. This book shows how both men and their closest associates lived their lives in luxury while using fear and intimidation to get what they wanted. The Chicago Mob would not have become one of the most powerful organizations in the world if not for Paul Ricca and Tony Accardo.

also known as the Waiter

Paul Ricca, nicknamed "the Waiter", was a Chicago mobster.

Paul Ricca was born Felice DeLucia in 1897 in Naples, Italy. Little is known about his childhood.

When he was seventeen Ricca killed a man who had broken off an engagement with one of his three sisters; Ricca confessed and served two years in prison.

Upon his release he killed a man who had been a witness against him and eventually fled under the name Paul Ricca to the United States. He was convicted in absentia for this murder and given a twenty-one-year sentence. He arrived in the United States on April 10, 1920, and eight years later became a naturalized citizen without divulging his true identity or criminal history.

Ricca earned what became his underworld nickname, "the Waiter, " while working in Bella Napoli, a Chicago restaurant owned by "Diamond Joe" Esposito and frequented by mobsters. After a stint managing a theater in Chicago's Little Italy, he was hired by Al Capone, the city's most notorious gangster, as manager of Capone's World Playhouse Corporation.

When Ricca married in 1927, Capone was his best man. Capone was convicted of income-tax evasion in 1931 and, after exhausting his appeals, he was sent to a federal prison in Atlanta in 1932. However, Ricca's star continued to rise under Capone's successor, Frank Nitti.

Some in the underworld preferred Ricca to Nitti; when New Yorkers "Lucky" Luciano, Meyer Lansky, and Frank Costello established their national gambling syndicate in the 1930's, they regarded Ricca as the most powerful gangster in Chicago and dealt with him as such.

With Nitti's suicide in 1943, Ricca came to be universally acknowledged as top man in the Outfit, as the Mafia in Chicago was known. As a mob boss, Ricca provided capital for criminal ventures such as loan-sharking and gambling, settled underworld disputes, and extorted payoffs from less powerful or influential mobsters.

In fact, his success was reliant on the loyalty of a group of ruthless young thugs, including Sam Giancana, who became his protégé and eventually his successor.

According to former FBI agent William F. Roemer, Jr. , who testified in 1983 before the Senate Permanent Subcommittee on Investigations, Ricca decreed "that no member of Chicago organized crime can have anything to do with narcotics traffic. "

Apart from any personal revulsion for drugs, Roemer said, Ricca knew that drug dealing alienated the mob's political contacts, who were tolerant of milder rackets such as gambling and prostitution, and exposed its members to long prison terms. Shortly after succeeding Nitti, Ricca was imprisoned for his role in the extortion of approximately $2 million from Hollywood movie studios through the International Alliance of Theatrical and Stage Employees, which was controlled by the mob. Although Ricca continued to supervise the crime family from behind bars, Anthony Accardo became what Roemer would later call a "caretaker chieftain. "

He kept in touch with Ricca, once coming to visit him in prison posing as a lawyer. Ricca had been sentenced to ten years but was released in 1947 after serving less than four. His parole became a political issue after Chicago newspapers quoted Ricca as having said that his influence extended to the White House.

Ricca supposedly asked his lawyers to find out who had final say over his parole. "That man must want something, " he was reported to have said. "Money, favors, a seat in the Supreme Court. Find out what he wants and get it for him. " The Chicago Tribune later accused Tom Clark, then attorney general and later a Supreme Court justice, of playing "a considerable role in releasing" Ricca and some fellow gangsters.

Following his release Ricca insulated himself from direct involvement in the Outfit's rackets, and debate raged for years over his real power in the mob.

In the early 1950's it was reported to Senator Estes Kefauver's select senate committee on organized crime that Ricca was "the national head of the crime syndicate"; in 1958, a similar committee chaired by Senator John L. McClellan called Ricca one of the three top mobsters in Chicago. Ricca was forced to testify before both committees; he repeatedly invoked the Fifth Amendment protection against self-incrimination.

By the early 1960's Ricca was the Outfit's elder statesman, living quietly and luxuriously on a River Forest estate outside Chicago that included a large house, soaring shade trees, and expansive lawns. His protégé Giancana became the city's most prominent racketeer, as much for his Las Vegas contacts and romance with singer Phyllis McGuire as for his organized crimes. In her memoir of childhood, Mafia Princess, Giancana's daughter Antoinette recalled visits to Ricca's home, where he lived with his wife, Nancy, and their three children. He was, Giancana's daughter wrote, "the very essence of the Mafia godfather. " Ricca, she wrote, "never spoke a vulgar word in my presence. He just exuded propriety, respect, dignity. He was the don of dons and regardless of his terrible history of criminality. I can speak of him only in terms of respect and love. When you were in his presence, he was very European, very courteous, and always respectful no matter who you were, and he professed a deep sense of honor and tradition. " Ricca spoke often of his impoverished childhood in Naples and still defended his killing in 1915 of the man he said had dishonored his sister Amelia.

In 1957 Ricca's U. S. citizenship was revoked on the grounds that he had entered the nation under a false name and without divulging his criminal record. Two years later the government began deportation proceedings, but the Italian government deemed Ricca so undesirable it refused to accept him back under any circumstances, even though he was still wanted for murder in Italy. The U. S. Immigration and Naturalization Service ordered Ricca to apply to other nations for permission to emigrate. None granted it, possibly because Ricca's applications laid out his criminal history in great detail. Ricca was jailed for income tax evasion in 1959 and served twenty-seven months of a nine-year sentence.

In 1962 Ricca paid the government $104, 000 in back taxes. However, in 1965 he was indicted and tried on the same charge; he testified that his income for 1963 was $80, 159 and that every penny had come from racetrack betting. The jury acquitted him. In his later years Ricca behaved erratically, frequently visiting the terminal at O'Hare International Airport without any apparent reason for doing so. At first, federal agents suspected Ricca was conducting mob business; eventually they concluded he was senile. When he died of heart disease in Chicago, a Roman Catholic priest delivered a brief message of condolence at the funeral. "Paul DeLucia received the last rites of the Church upon his death, " he told reporters. "What greater consolation can there be for a family than to know that their loved one died in the grace of God?" 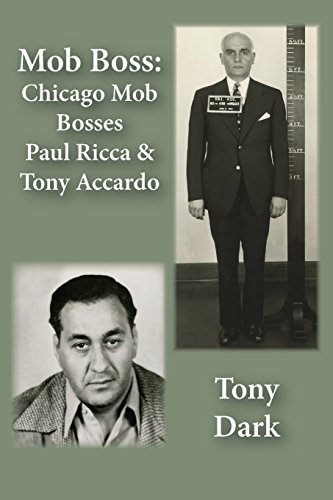 He was noted for his courtliness and impressed associates as well as law enforcers with his dignified manner, aversion for needless violence, and impeccable appearance. He had strong facial features, including a firm, square jaw. He often wore glasses and a hat that made him look like what he said he was, just another businessman.