Retention and Stability in Orthodontics

This work provides orthodontists and oral/maxillofacial surgeons with a comprehensive account of the latest theories and methods concerning retention and stability. It presents basic principles of biomechanics to practitioners in a simple and understandable manner so that they can improve their own techniques. The book includes chapters on different stages of orthodontic treatment such as intrusion of teeth, space enclosure, uprighting and correction of various malocclusions. 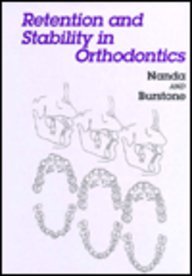