(It was conceived by the architects John Howells and Raymo...)

It was conceived by the architects John Howells and Raymond Hood, and built in 1924 for the American Radiator Company.

Active and successful architect, designer of many note-worthy buildings, worked in the Art Deco style.

He received his education in Providence schools and at Brown University. Beginning architectural study at the Massachusetts Institute of Technology, he received a B. S. degree in 1903. Then he arrived in Paris to enter the Paris Ecole des Beaux Arts. Awarded his diploma in Architecture in 1911. 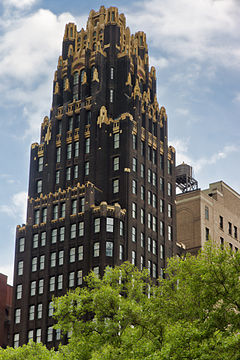 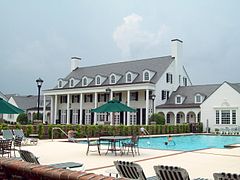 Mr. Hood returned to the U. S. to begin his career in Pitts¬burgh with Henry Hornbostle. For three years he remained in his office, during which he was particularly identified with the plans of the New York State Education Building at Albany, and schools at Carnegie Institute in Pittsburgh. He also worked on designs Mr. Hornbostle was preparing to submit in competitions.

In 1914 Mr. Hood moved to New York and opened an office in an old brownstone front building at No. 7 West 42nd Street. There was however a dearth of private building during the first World War and not until 1920 did he achieve real success. His first important commission was for alterations to the DuPont Hotel at Wilmington, Delaware, followed by other buildings at Tarrytown, N. Y., on which he was associated with J. Andre Fouilhoux (see), and intermittently through the following years Hood & Fouilhoux were partners on various building projects. In 1922 they were invited by John Mead Howells to assist in preparing plans for the competition on the Chicago Tribune Tower building. The drafting was done in Hood's office. At the close of the competition the judges awarded Howells & Hood the $50,000.00 prize (of which one-fifth was Hood’s share), and they were subsequently commissioned as architects of the great building. For his participation in the work Mr. Hood received wide recognition and from that time until his death was continuously busy, specializing in modern office and public buildings of distinctive character.

In 1924 the American Radiator Building in New York was completed, Hood & Fouilhoux’s first important building in Manhattan, and with its striking exterior color decoration of black and gold, is regarded by many as Mr. Hood’s architectural masterpiece. Among various other works of the firm should be mentioned the Bethany Union Church in Chicago (Gothic design) built in .1926; New York Studios of the National Broadcasting Company, 1927; William Morris residence at Greenwich, Conn.; Masonic Hall, Scranton, Pa., won in a competition in 1928, associated with Henry V. K. Henderson; and the McGraw Building on West 42nd Street, completed in 1931. During one period (1927-31) Frederick Godley was connected with Hood & Fouilhoux and assisted in designing a number of buildings.

In the latter phase of his career, 1931-34, Mr. Hood collaborated with Kenneth Murchison in designing the Beaux Arts Apartments in New York (showing a modernistic trend); the Chicago Daily News Building, an outstanding achievement, and the Apartment House at No. 3 West 84th Street, both in association with John Mead Howells. Mr. Hood also prepared plans for the National Radiator Building in London (J. Gordon Reeves, Associate Architect) with the same color scheme as the New York building, but a different plan.

Prominent in professional affairs. Mr. Hood became a member of the New York Chapter, A. I. A. in 1923 and was advanced to Institute Fellowship the year of his death. He was also a member and officer (president for two years, 1929-31) of the Architectural League of New York.