also known as The Mentalist

Simon Baker is an Australian actor and director. In his television acting career, he is best known for his lead role in the CBS television series The Mentalist as Patrick Jane and as Nicholas Fallin in The Guardian.

In his film acting career, he is best known for the lead role of Riley Denbo in Land of the Dead and Christian Thompson in the film adaptation of The Devil Wears Prada, based on the 2003 novel of the same name.

Simon Baker was born to a high school English teacher, Elizabeth Labberton, and a groundskeeper/mechanic, Barry Baker, on 30 July 1969, in Launceston, Tasmania.

Baker began acting on Australian television during the late 1980s using the name "Simon Denny". He first appeared in music videos for Melissa Tkautz ("Read My Lips") and Australian dance outfit Euphoria ("Love You Right") in 1991 before appearing in the successful series E Street, Home and Away and Heartbreak High.

1999 Ride with the Devil George Clyde

2001 The Affair of the Necklace Rétaux de Villette

2010 The Killer Inside Me Howard Hendricks 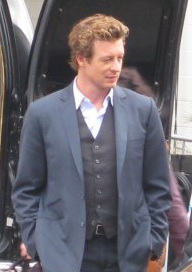 Quotations: Do you have some tea?!