Stanley Cavell looks closely at America's most popular art and our perceptions of it. His explorations of Hollywood's stars, directors, and most famous films--as well as his fresh look at Goddard, Bergman, and other great European directors--will be of lasting interest to movie-viewers and intelligent people everywhere.

The Claim of Reason: Wittgenstein, Skepticism, Morality, and Tragedy

This handsome new edition of Stanley Cavell's landmark text, first published 20 years ago, provides a new preface that discusses the reception and influence of his work, which occupies a unique niche between philosophy and literary studies.

During the '30s and '40s, Hollywood produced a genre of madcap comedies that emphasized reuniting the central couple after divorce or separation. And the female protagonists were strong, independent, and sophisticated. Here, Stanley Cavell examines seven of those classic movies for their cinematic techniques, and for such varied themes as feminism, liberty and interdependence. Included are Adam's Rib, Bringing Up Baby, and The Philadelphia Story.

Themes Out of School: Effects and Causes by Cavell (1-Aug-1988) Paperback

(Since the publication of his celebrated first essay on Sh...)

Since the publication of his celebrated first essay on Shakespeare, The Avoidance of Love: A reading of King Lear, Stanley Cavell has continued to explore radically new and provocative interpretations of a number of the plays. This volume collects those writings for the first time and includes pieces not previously published. The essays are bound together by a concern for scepticism. In Coriolanus' disdain, Leontes' and Othello's jealousy, Hamlet's inertia, and Lear's exorbitance, Stanley Cavell sees Shakespeare as offering, for the first time in European letters, a profound diagnosis of the sceptical refusal to acknowledge truths about oneself and one's relations to others, and as exploring the motives and tragic consequences of that refusal. His readings of the plays are subtle and challenging, and the insights they contain often startle by both their originality and their familiarity. As a whole they present a unique point of view on the plays.

In Quest of the Ordinary: Lines of Skepticism and Romanticism

( These lectures by one of the most influential and origi...)

These lectures by one of the most influential and original philosophers of the twentieth century constitute a sustained argument for the philosophical basis of romanticism, particularly in its American rendering. Through his examination of such authors as Emerson, Thoreau, Poe, Wordsworth, and Coleridge, Stanley Cavell shows that romanticism and American transcendentalism represent a serious philosophical response to the challenge of skepticism that underlies the writings of Wittgenstein and Austin on ordinary language.

In Quest of the Ordinary: Lines of Skepticism and Romanticism by Cavell Stanley (1994-11-01) Paperback

This New Yet Unapproachable America: Lectures After Emerson after Wittgenstein (The 1987 Frederick Ives Carpenter Lectures)

The two essays in this book, first published in 1989, were delivered as two of the 1987 Carpenter Lectures at the University of Chicago. Wittgenstein and Emerson are major influences on and subjects of Cavell's thought, and here he thinks and rethinks of these two intellectual forebears. As the title shows, he finds an important crux for contemplation in Emerson's idea of America.

( Stanley Cavell is a titan of the academic world; his wo...)

Stanley Cavell is a titan of the academic world; his work in aesthetics and philosophy has shaped both fields in the United States over the past forty years. In this brief yet enlightening collection of lectures, Cavell investigates the work of two of his most tried-and-true subjects: Emerson and Wittgenstein. Beginning with an introductory essay that places his own work in a philosophical and historical context, Cavell guides his reader through his thought process when composing and editing his lectures while making larger claims about the influence of institutions on philosophers, and the idea of progress within the discipline of philosophy. In “Declining Decline,” Cavell explains how language modifies human existence, looking specifically at the culture of Wittgenstein’s writings. He draws on Emerson, Thoreau, and many others to make his case that Wittgenstein can indeed be viewed as a “philosopher of culture.” In his final lecture, “Finding as Founding,” Cavell writes in response to Emerson’s “Experience,” and explores the tension between the philosopher and language—that he or she must embrace language as his or her “form of life,” while at the same time surpassing its restrictions. He compares finding new ideas to discovering a previously unknown land in an essay that unabashedly celebrates the power and joy of philosophical thought.

[(This New Yet Unapproachable America: Lectures After Emerson After Wittgenstein)] [Author: Stanley Cavell] published on (August, 2013)

Conditions Handsome and Unhandsome: The Constitution of Emersonian Perfectionism: The Carus Lectures, 1988

( In these three lectures, Cavell situates Emerson at an ...)

In these three lectures, Cavell situates Emerson at an intersection of three crossroads: a place where both philosophy and literature pass; where the two traditions of English and German philosophy shun one another; where the cultures of America and Europe unsettle one another. "Cavell's 'readings' of Wittgenstein and Heidegger and Emerson and other thinkers surely deepen our understanding of them, but they do much more: they offer a vision of what life can be and what culture can mean. . . . These profound lectures are a wonderful place to make [Cavell's] acquaintance."—Hilary Putnam

Conditions Handsome and Unhandsome: The Constitution of Emersonian Perfectionism: The Carus Lectures, 1988 by Cavell Stanley (1991-01-15) Paperback

By S Cavell - The World Viewed: Reflections on the Ontology of Film (Enlarged edition) (6.1.1980)

During the '30s and '40s, Hollywood produced a genre of madcap comedies that emphasized reuniting the central couple after divorce or separation. And the female protagonists were strong, independent, and sophisticated. Here, Stanley Cavell examines seven of those classic movies for their cinematic techniques, and for such varied themes as feminism, liberty and interdependence. Included are Adam's Rib, Bringing Up Baby, and The Philadelphia Story.

In Quest of the Ordinary: Lines of Skepticism and Romanticism by Cavell, Stanley (1994) Paperback

In Quest of the Ordinary: Lines of Skepticism and Romanticism Hardcover February, 1989

In Quest of the Ordinary: Lines of Skepticism and Romanticism Paperback - November 1, 1994

[(In Quest of the Ordinary: Lines of Skepticism and Romanticism)] [Author: Stanley Cavell] published on (November, 1994)

[(The World Viewed: Reflections on the Ontology of Film )] [Author: Stanley Cavell] [Jul-1980]

Cavell, Stanley was born on September 1, 1926 in Atlanta. Son of Irving and Fannie (Segal) Goldstein. 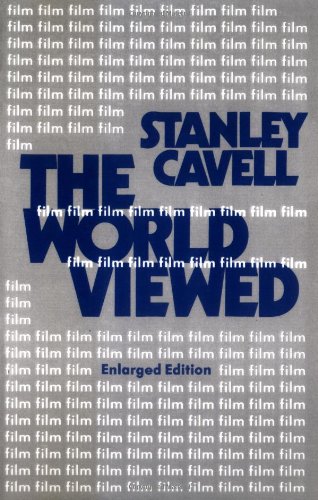 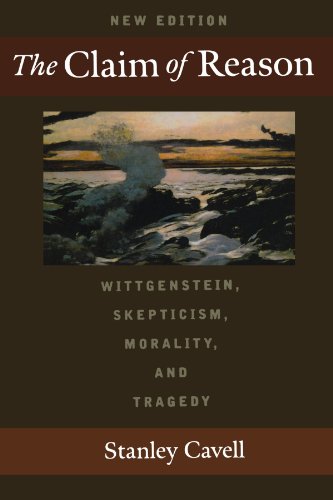 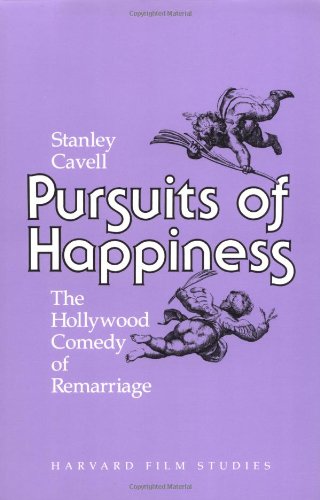 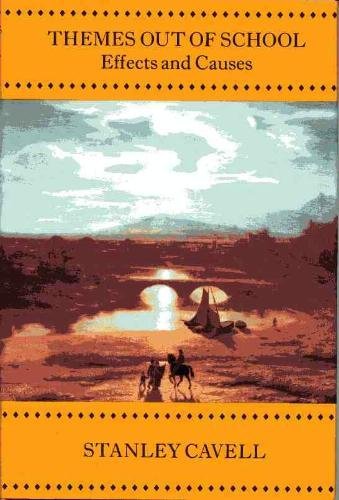 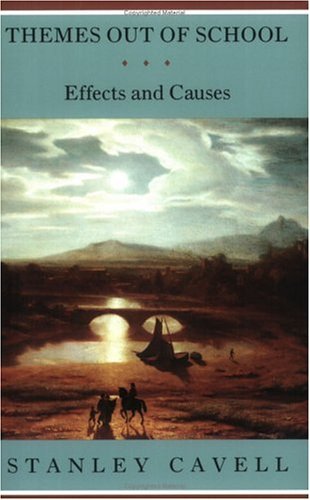 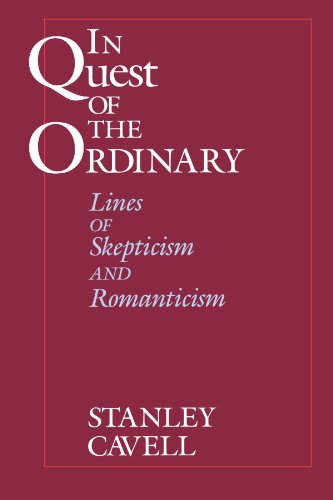 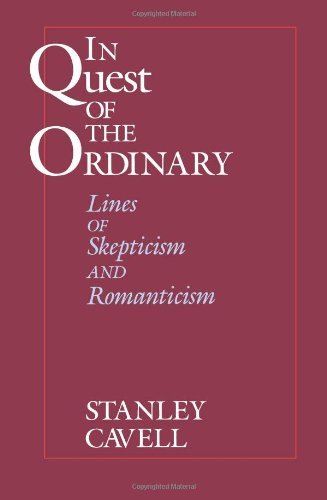 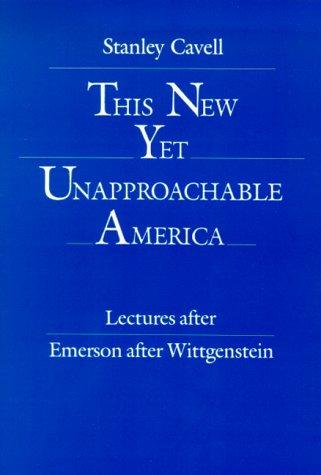 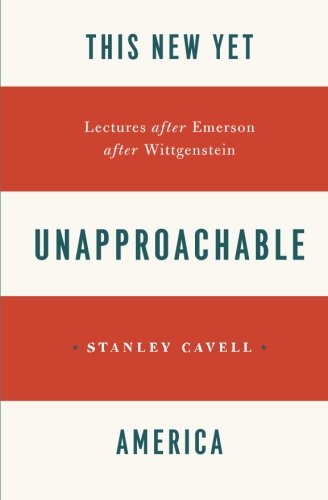 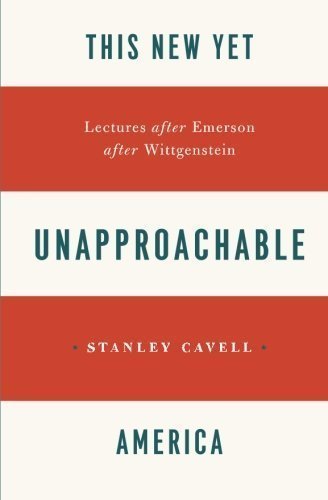 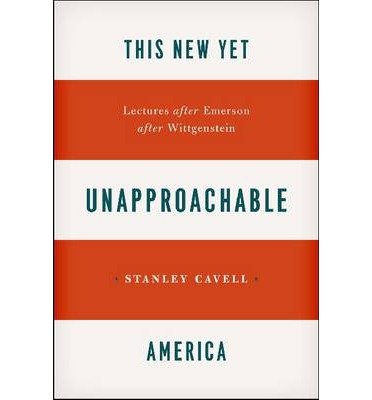 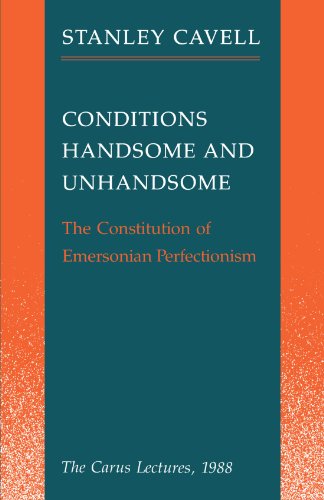 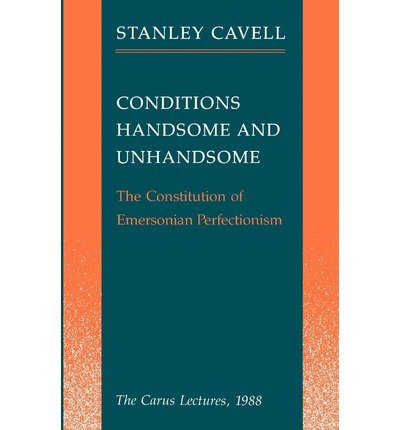 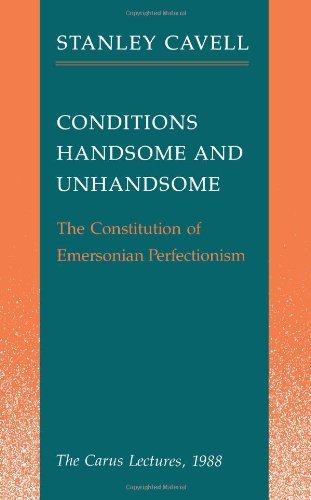 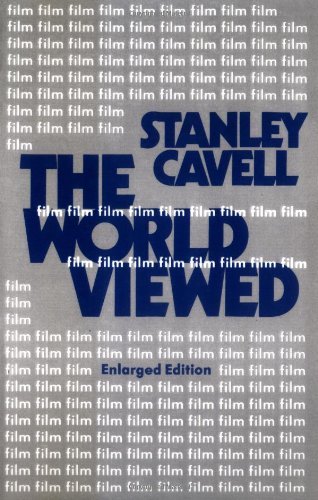 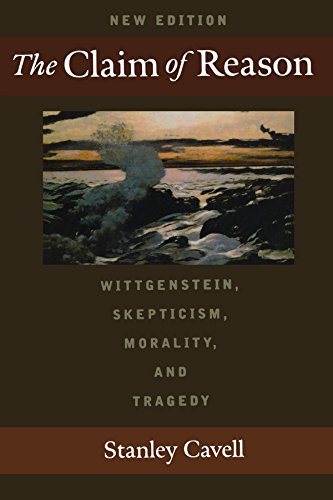 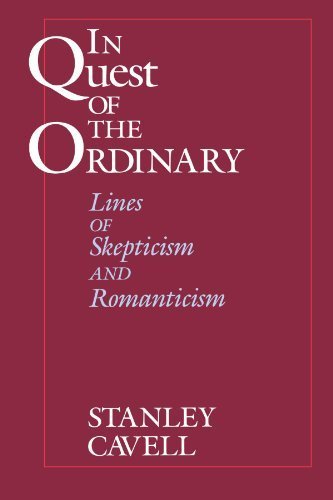 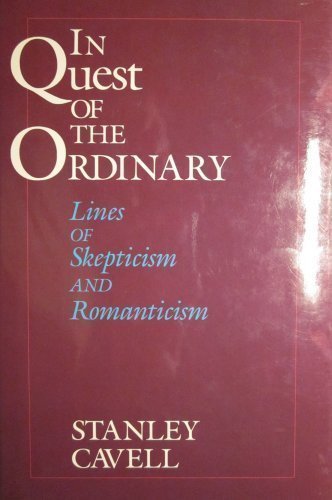 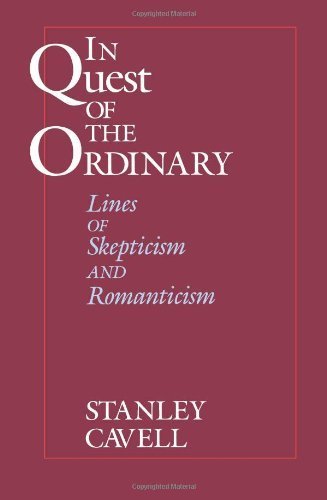 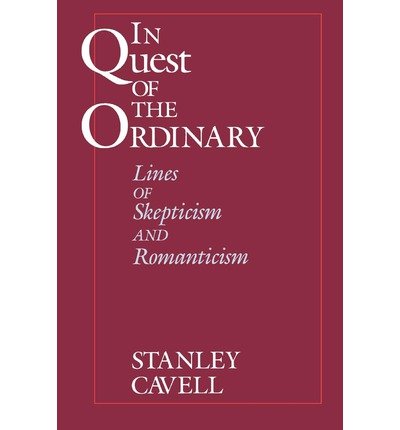 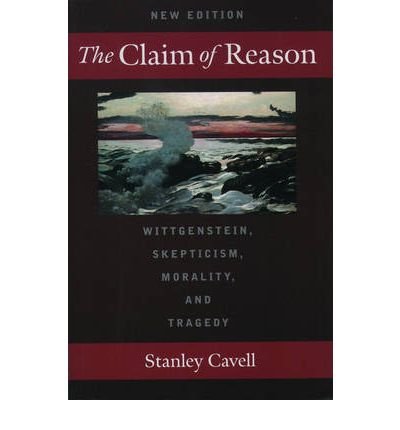 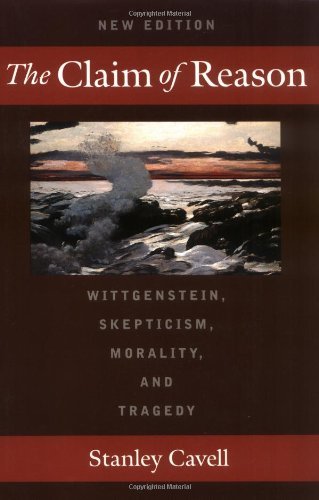 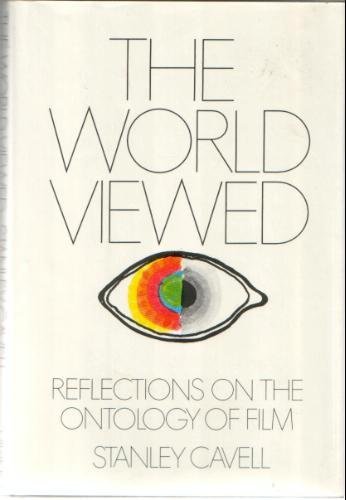 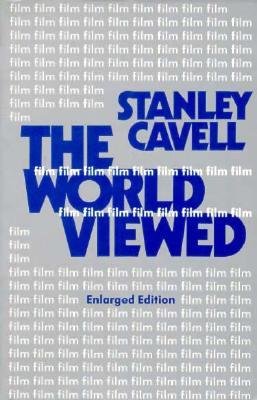 Cavell is centrally concerned with the difficulty of properly grasping the obvious, associating Emerson’s appeal to the ‘common’ with Austin's to ‘ordinary’ language and Wittgenstein's to criteria. The self-knowledge involved in becoming conscious of the criteria governing one’s use of words has non-trivial relations with psychoanalysis, enabling one to grasp one’s relations with fellow language users and the world of which one speaks, best thought of in terms not of knowledge but of sympathy, indifference, avoidance and acknowledgement.

Heidegger's phenomenological analyses are relevant here. Philosophical writing should itself be transformative, with a rigour sharing the Kantian aspiration to a universal voice’ grounded in integrity of vision. Philosophical scepticism represents a form of that human aspiration to transcend finitude mapped by Romanticism whose defeat, as Shakespeare shows, can lead to tragedy.

Film as a medium mimics the sceptical predicament, with several of its genres engaging with the possibilities of human acknowledgement. Whether in epistemology, art, morality or politics, criteria do not confer impersonal certainty. Judgement is required and this may quite properly be in the service of self-transcending regulative ideals, such as Emersonian ‘perfectionism’, which defeat all appeal to established or self-justifying rules.

Until recently Cavell’s influence has been greater in the related disciplines with which he has engaged than in philosophy itself.