Benjamin Franklin Medal for Distinguished Achievement in the Sciences

Military Order of Saint James of the Sword

Military Order of Saint James of the Sword

The Puzzle People: Memoirs Of A Transplant Surgeon

(A comprehensive guide to kidney transplantation, this boo...)

Doctor, Can You Hear Me? Patient, Are You Listening?

Thomas Earl Starzl was an American physician, educator who is considered "the father of modern transplantation". He performed the first human liver transplant in 1963 and was also a pioneer in kidney transplantation.

Starzl, Thomas Earl was born on March 11, 1926 in Le Mars, Iowa, United States to Roman F. and Anna Laura (Fitzgerald) Starzl. His father was also a frustrated inventor. His mother, Anna Loretta (Laura) Fitzgerald Starzl, was the center of family life and when she died of breast cancer just before Starzl graduated from college the family disintegrated. Starzl had an older brother, two younger sisters, and from his father's second marriage, a half sister.

Upon graduation from high school, Starzl immediately enlisted in the navy and was sent to officers' training school at Westminster College in Fulton, Missouri, in 1944. He returned to Westminster College in the premedical program after his discharge from the navy and graduated with a degree in biology in 1947. He entered Northwestern University Medical School in Chicago, Illinois, in September 1947. Starzl attended Northwestern University Medical School in Chicago, where in 1950 he received a Master of Science degree in anatomy and in 1952 earned both a Ph.D. in neurophysiology and an M.D. with distinction.

After four years at Johns Hopkins, Starzl chose to take a position at Jackson Memorial Hospital in Miami, Florida. Jackson Memorial Hospital had one of the busiest emergency rooms in the United States. Starzl was in on the beginning of both open heart surgery and the dawn of blood vessel surgery. He also set up a laboratory in an empty garage on the grounds of the hospital and experimented with removing the livers of dogs. He was successful and published his results, which quickly became the standard worldwide.

In 1958 Starzl accepted a fellowship in thoracic surgery at Northwestern University. In 1959 he passed the thoracic surgery boards and remained on the faculty for four years. He received two awards that helped to fund his experimental research in techniques for liver transplantation. The National Institutes of Health gave him a five-year grant, and the other was the Markle Scholarship, which induced him to stay in academic medicine. Most surgeons at university hospitals were volunteers and derived their income from private patients. Starzl was the second full-time member of the Northwestern University surgical faculty. That and his grants allowed him to continue his research on liver transplants.

After four years at Northwestern, poor working conditions caused Starzl to look for a better position. He joined the faculty at the University of Colorado School of Medicine as an associate professor of surgery in 1962 and became a professor of surgery in 1964. He was to remain in Colorado for 19 years. On March 27, 1962, Starzl performed his first kidney transplant on an identical twin recipient. Soon he became interested in a patient, Royal Jones. The boy, only twelve years old, was running out of places where the artificial kidney machine could be connected. His mother was to be his donor. This would be Starzl's first non-twin transplant. In his autobiography, Starzl said that to abandon Royal was unthinkable in view of the deep commitment made to him and his mother. On November 24, 1962, the kidney transplant was completed along with a combination treatment of irradiation, and the administration of immunosuppressant drugs Imuran and prednisone. The operation was a success. Royal Jones was later to have the first and second kidney transplants replaced, but was still alive when Starzl's autobiography was published thirty years later. Starzl and his research team went on to perform more than 1,000 kidney transplants at Colorado General Hospital and at Veterans Administration Hospital in Denver.

Starzl was not satisfied with his success in the field of kidney transplantation. He was still determined to transplant livers. His first attempt was on March 1, 1963, on a three-year-old boy, Bennie Solis, who was born with an incomplete liver. Uncontrolled bleeding killed Solis. Starzl tried again in May of 1963 with a man suffering from cancer of the liver. Starzl tried to solve the bleeding problem by administering huge amounts of fibrinogen, a protein that forms blood clots. The operation appeared to be a success, but the man died three weeks later from complications due to blood clotting.

The paramount problems to be solved were uncontrolled bleeding and tissue rejection. Starzl suspended human liver transplantation to work on these issues. He also worked on the manuscript for his first book, Experience in Renal Transplantation. He also suffered a bout of hepatitis which was all too common at that time for transplant personnel. In 1964 he and his colleagues closed their transplant center for six months in order to set up the first extensive trial of tissue matching ever attempted. Starzl worked with Dr. Paul Terasaki from the University of California at Los Angeles. Terasaki concluded that tissue matching within families was feasible, but that it had limited value with unrelated donor kidneys. It was clear to Starzl and Terasaki that the solutions to organ transplant rejections lay in the development of better drugs and other treatment strategies. Starzl theorized that organ rejection could be controlled by using the steroid prednisone along with Imuran. He soon added the anti-lymphocyte globulin and another immunosuppressant, cyclosporin. The use of this combination of drugs advanced kidney transplantation from an experimental procedure to a standard procedure.

In 1967 Strazl felt that the surgical techniques and immunosuppressant drugs had advanced enough to begin liver transplant trials again. The first attempts were on infants and young children with severe liver disease. Some of the operations were successful, while others failed because of the severity of the illnesses some of the patients had. By the late 1970s the survival rate for liver transplants had risen to 40 percent. Starzl was promoted to chair of the department from 1972 until he moved to the University of Pittsburgh in 1981.

In 1981 Starzl joined the staff of the University of Pittsburgh School of Medicine as professor of surgery. For the next ten years he oversaw the largest transplant program in the world at Presbyterian University Hospital (UPMC Presbyterian), Children's Hospital of Pittsburgh, and Oakland Veterans Affairs Medical Center. Ultimately, he became the director of the University of Pittsburgh Transplantation Institute which was renamed the Thomas E. Starzl Transplantation Institute (STI) in 1996. In 1998 he retired as director but continued to be active in research.

Starzl engaged in significant work during his tenure at the University of Pittsburg Transplantation Institute. He got the National Institutes of Health to approve the drug cyclosporin for liver transplants. In 1984 he helped to get a bill passed by Congress which set up a national system of organ procurement and distribution. He and his researchers have improved the outcomes of liver, kidney, pancreas, and multiple organ transplantations. In 1986 Starzl and his team successfully completed their pivotal work on the anti-rejection drug tacrolimus which has benefited nearly 5,000 patients. To address the chronic shortage of human organs, Starzl and his team have looked into the feasibility of cross-species transplantation, or xenotransplantation. In 1992 and 1993, Starzl and his team performed two successful baboon-to-human liver transplants, making medical history.

In 1990 Starzl underwent coronary bypass surgery. He retired from active surgery and wrote his autobiography, The Puzzle People: Memoirs of a Transplant Surgeon. He also remained active as professor of surgery at the University of Pittsburgh School of Medicine and the University of Pittsburgh Medical Center’s (UPMC) program named in his honor: the Thomas E. Starzl Transplantation Institute. 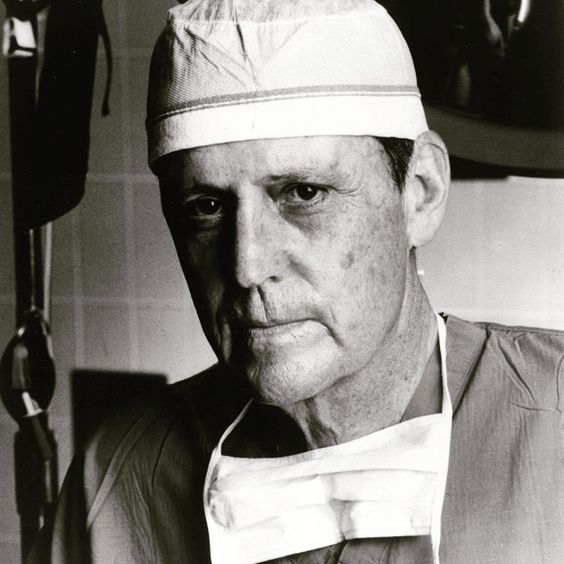 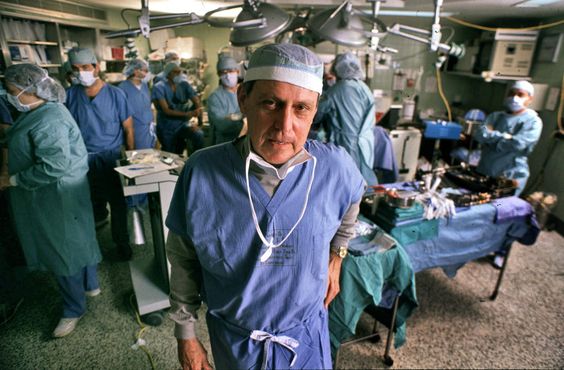 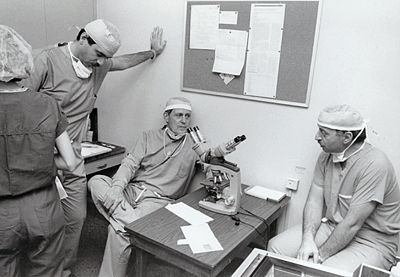 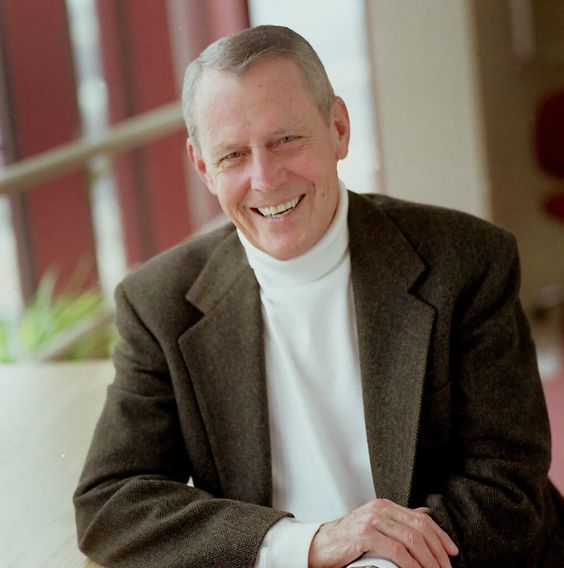 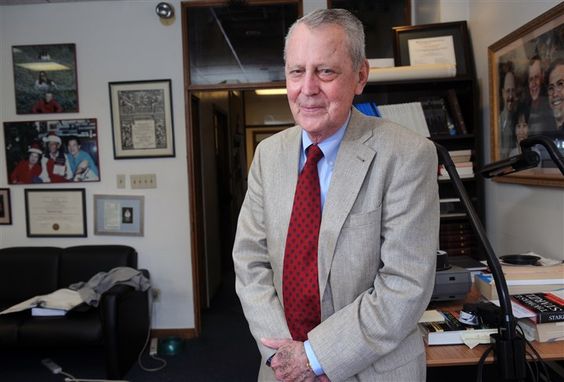 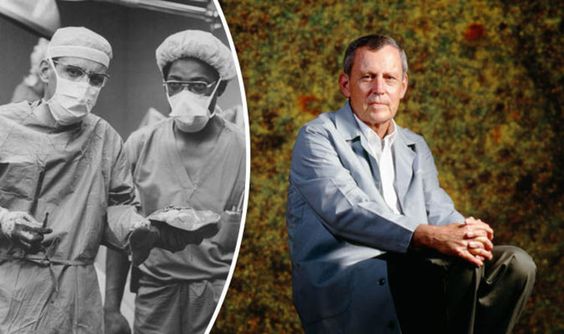 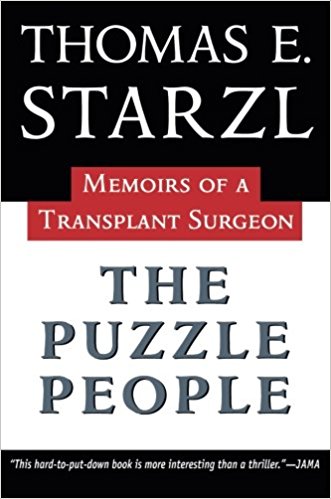 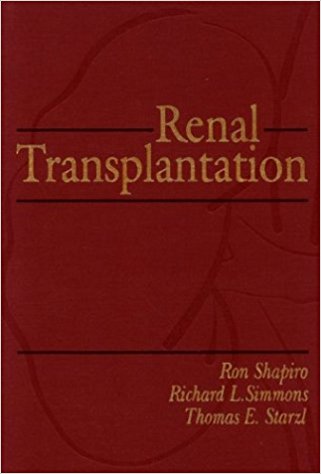 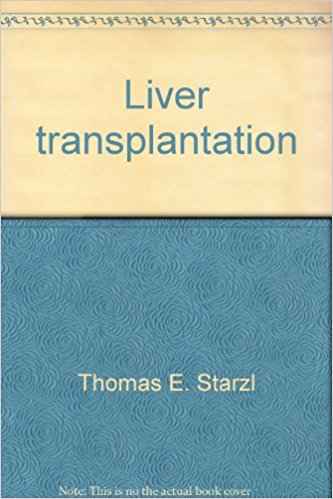 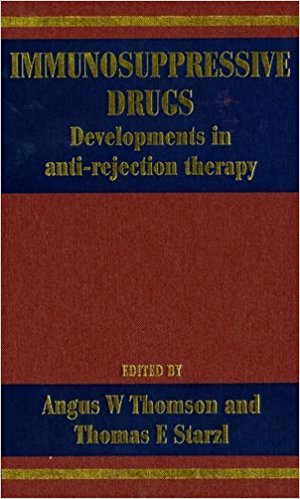 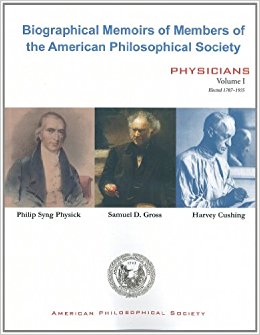 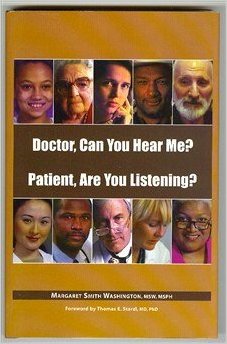 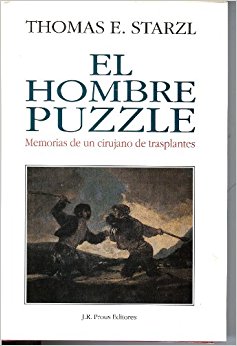 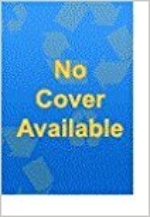 The idea for the title was given to him by an Indian journalist who asked him if in the next decade a puzzle man with multiple organs from various human and non-human sources would be feasible. After contemplating the idea, he decided that every patient who receives an organ is a puzzle because of all the ways the body has to change in order to accept the gift. Starzl continued to be active in research. He changed his concentration to chimerism, the coexistence of donor and recipient cells. Starzl now believed that the immune system no longer needed to be suppressed. The body could be fooled into believing that the transplanted tissue was not foreign. The trick was to convince both the body's defense mechanism and the new organ that the intruder is really "self," a recognized member of the host body.

Many of Starzl's ideas are still controversial, especially the animal to human transplants.

He married Barbara Brothers on November 27, 1954. Together they had three children: Timothy, Rebecca, Thomas. While Starzl's professional life was extremely successful, his personal life was in shambles. His wife of 22 years divorced him intending to marry a wealthy Middle Eastern businessman. He felt that she rightly was tired of being a distant second to his career. His father, who had become totally paralyzed, died at about the same time. Next, his sister, Nancy, died of liver disease and he was unable to get to her in time. His son, Tim, was also hospitalized with an emotional breakdown. In March 1977 Starzl assembled a new research group. One of the researchers was a young woman, Joy Conger, who would become his second wife in 1981.