(Welcome to your study of enzyme kinetics, the subject tha...)

Welcome to your study of enzyme kinetics, the subject that underlies all enzymology, which in turn underlies all aspects of biochemistry. This text will give you an introduction to a wide range of topics that constitute the modern enzyme kinetics. This textbook is directed at graduate students in biochemistry, chemistry, and life sciences, for advanced courses in enzyme kinetics, enzymology, and enzyme chemistry. For this reason, the whole book is organized in a systematic and scholarly fashion. It is unlikely that the student will be expected to cover everything in the text, but in a later career she or he may find it an invaluable reference for topics that are needed in practice. The concepts, definitions and detailed algebra of enzyme kinetics are laid out in accurate detail. For that reason, this textbook can also serve as a handbook for enzyme kinetics for research workers in the field. The research worker will find it a useful source, which can be used for solving the daily experimental problems in the laboratory. The preparation of the manuscript for this book was under the constant surveillance of W. Wallace Cleland, Professor of Chemical Science at the University of Wisconsin in Madison, and one of the founders of modern enzyme kinetics. Without his help and advice, this bookwould not be possible. Several versions of the manuscript were constantly corrected and improved by Svetlana Professor of Biochemistry at the University of Novi Sad.

Leskovac, Vladimir was born on March 3, 1935 in Novi Sad, Yugoslavia. Son of Mladen and Smilja Leskovac. 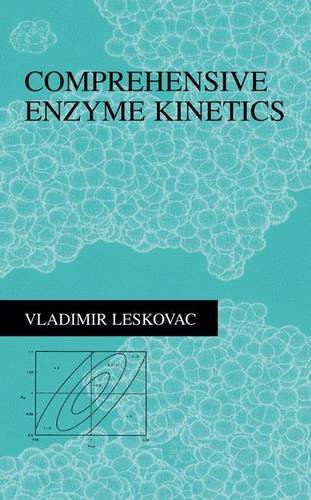