Maggie's Centres at the Victoria Hospital

Zaha Hadid was an Iraqi-British architect who became the first Arab woman to receive the prestigious Pritzker Architecture Prize. Known for her highly expressive designs marked by sweeping fluid forms of multiple perspective points, she was considered a pioneer in contemporary avant-garde architecture styles.

Zaha Hadid was born on 31 October 1950 in Baghdad, Iraq, to an upper-class Iraqi family. Her father, Muhammad al-Hajj Husayn Hadid, was a wealthy industrialist from Mosul. He co-founded the left-liberal al-Ahali group in 1932. The group was a significant political organization in the 1930s and 1940s. He was the co-founder of the National Democratic Party in Iraq and served as minister of finance after the overthrow of the monarch after the 1958 Iraqi coup d'état for the government of General Abd al-Karim Qasim. Her mother, Wajiha al-Sabunji, was an artist from Mosul while her brother Foulath Hadid was a writer, accountant, and an expert on Arab affairs.

In the 1960s Hadid attended boarding schools in England and Switzerland.

Hadid studied mathematics at the American University of Beirut before moving, in 1972, to London to study at the Architectural Association School of Architecture. There she studied with Rem Koolhaas, Elia Zenghelis and Bernard Tschumi. Her former professor, Koolhaas, described her at graduation as "a planet in her own orbit." Zenghelis described her as the most outstanding pupil he ever taught. 'We called her the inventor of the 89 degrees. Nothing was ever at 90 degrees. She had a spectacular vision. All the buildings were exploding into tiny little pieces." He recalled that she was less interested in details, such as staircases. "The way she drew a staircase you would smash your head against the ceiling, and the space was reducing and reducing, and you would end up in the upper corner of the ceiling. She couldn't care about tiny details. Her mind was on the broader pictures—when it came to the joinery she knew we could fix that later. She was right.' Her fourth-year student project was a painting of a hotel in the form of a bridge, inspired by the works of the Russian suprematist artist Kazimir Malevich. 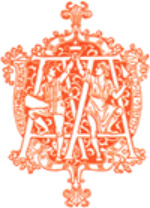 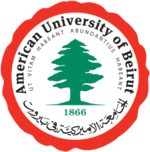 After graduation in 1977, she went to work for her former professors, Koolhaas and Zenghelis, at the Office for Metropolitan Architecture, in Rotterdam, the Netherlands. Through her association with Koolhaas, she met the architectural engineer Peter Rice, who gave her support and encouragement. Hadid became a naturalized citizen of the United Kingdom. She opened her own architectural firm, Zaha Hadid Architects, in London in 1980, but at first her ideas were more in demand than her actual designs. Hadid taught courses at the Architectural Association and filled notebooks with one-of-a-kind ideas, some of which were published in architecture magazines or exhibited in galleries. Hadid began to enter design competitions, some of them research-oriented and others for buildings intended for construction. Her design for The Peak, a sports club jutting out horizontally from one of the mountain slopes that surround the city of Hong Kong, won the top prize in the institution's competition, but the building was never constructed. Hadid's competition entries in the 1980s and early 1990s were little known to the public at large but stirred up interest among her fellow architects, and even after she became famous, her website continued to list her competition prizes before focusing on her actual building projects.

After several small projects, including one for the interior of the Moonsoon Restaurant in Sapporo, Japan, Hadid's first major building was constructed in 1993 and 1994: it was a small fire station, with numerous irregular angles (Hadid has been widely quoted as saying that since there are 360 degrees, she sees no reason to restrict herself to just one), on the grounds of the Vitra Furniture Company in Weil am Rhein, Germany. In 1994 Hadid seemed to be on the verge of a breakthrough: her design for the new Cardiff Bay Opera House in Britain's Wales region was selected for construction. It was to be an unorthodox building, with sharp angles and interior spaces that ran into and through one another rather than falling neatly into separate areas, but it was also planned to be inviting to the user, with an auditorium surrounded by glassed-in spaces that gave views of nearby Cardiff Bay.

With Hadid an unknown quantity and Britain's Prince Charles in the midst of a widely publicized campaign in favor of neo-traditional architecture in Britain, the design ran into trouble almost immediately. The design competition was reopened, and Hadid's design was once again named the winner, but the project's funder, Britain's National Lottery, eventually withdrew its commitment. Hadid was devastated. "It was such a depressing time," she recalled to Rowan Moore of the London Evening Standard. "I didn't look very depressed maybe but it was really dire. I made a conscious decision not to stop, but it could have gone the other way."

At the same time, Hadid began to amass a solid core of admirers among her staff, among architecture experts, and among ordinary observers. At the same time the Cardiff project was going down in flames, Hadid designed a temporary pavilion to house an exhibit for the architecture magazine Blueprint at a builders' convention. She had to present the structure, described by Moore as "a thing of flying steel," to a gathering of the magazine's advertisers, most of whom greeted it initially with silence. But an executive from a firm that made portable toilets stood up and said "I think it's bloody marvelous" (according to Moore), and began applauding. The other advertisers joined in, and Hadid gained a moment in the building-trade spotlight.

As clients became more and more fascinated with Hadid's plans, some of the plans advanced from theory to reality. She designed the unique Bergisel Ski Jump on a mountain near Innsbruck, Austria, and a parking garage and transit station in suburban Strasbourg, France, that later won the Mies van der Rohe Award from the European Union. In 1998 came the biggest commission yet: the Lois and Richard Rosenthal Center for Contemporary Art in Cincinnati, popularly known as the Contemporary Arts Center.

The new building had to fit the confines of a narrow street corner lot in downtown Cincinnati, but Hadid made a virtue of necessity by linking the museum's internal and external environments: the outdoor sidewalk continued into the building, where it propelled visitors toward a sleek black central staircase that melded dramatically into the structure's back wall. As viewers ascended the staircase they looked into galleries that completely overturned the usual neutral conception of museum display spaces—the galleries had different shapes and sizes, and each one seemed to present something new to those approaching. "Not many people voluntarily walk up six stories anywhere," noted Joseph Giovannini of Art in America , "but Hadid's space so intrigues visitors that few think of bypassing the experience by hitching a ride on the elevator: they sense they would miss chapters." A bonus in Hadid's design was its economy: the building used only common materials, and construction costs came in at a reasonable $230 per square foot.

Hadid's creative fulfillment of a plum commission raised her international profile considerably. Where Hadid had sometimes been considered abrasive and difficult to work with, now she was hailed as a pioneer who had stuck to her vision even while facing difficult obstacles. At times, Hadid ascribed the resistance her ideas encountered to her gender and ethnicity. She also conceded that her work and personality were challenging. "I am eccentric, I admit it," she told Moore, "but I am not a nutcase."

Hadid's next major American commission came from Bartlesville, Oklahoma, site of the Price Tower designed by legendary American architect Frank Lloyd Wright. Hadid was hired to design a museum adjoining the Wright building—a choice that made sense, for Hadid was sometimes compared to Wright for her futuristic designs and her visionary rethinking of the relationships between humans and buildings. In 2006 it was one of Wright's most famous structures, the Guggenheim Museum in New York, that played host to a major retrospective of Hadid's work.

Indeed, the links between building and environment, and between building and user, loomed larger in Hadid's thinking as her fame grew and commissions poured into her office. "I started out trying to create buildings that would sparkle like isolated jewels; now I want them to connect, to form a new kind of landscape, to flow together with contemporary cities and the lives of their peoples," she told Glancey. A new factory she designed for German automaker BMW was laid out in such a way that workers and management personnel crossed paths more frequently.

In 2004 Hadid was awarded the Pritzker Architecture Prize, considered the profession's highest honor. She was the first woman to receive the award. In the mid-2000s she finally received a full-scale commission in the British Isles, for a cancer-care building called Maggie's Centre in Fife, Scotland. Highly visible Hadid buildings planned or underway included a bridge in the Persian Gulf state of Abu Dhabi, a movie theater complex in Barcelona, Spain, and several new museums. Greater international exposure seemed assured in a project waiting further down the line: the aquatics building for the 2012 Summer Olympics to be held in London. And she seemed to be outdoing herself with each successive design. "Co-curator Monica Montagut quotes Hadid's statement that 'I still believe in the impossible,'" noted Raymund Ryan in his Architectural Review commentary of Hadid's Guggenheim exhibition. "Judging from this display in New York City, there are few limits to what Hadid might do next."

Of all her works, Hadid designed only one government building, offices for the port authority, or Havenhuis, in Antwerp, Belgium, completed in 2016. Most new government buildings attempt to express solidity and seriousness but Port Authority, a ship-like structure of glass and steel on a white concrete perch, seems to have landed atop the old port building constructed in 1922. The faceted glass structure also resembles a diamond, a symbol of Antwerp's role as the major market of diamonds in Europe. It was one of the last works of Hadid, who died in 2016, the year it opened. The square in front of the building was renamed to Zaha Hadidplein (Zaha Hadidsquare) to honor her death.

On 31 March 2016, Hadid died of a heart attack in a Miami hospital, where she was being treated for bronchitis.

The statement issued by her London-based design studio announcing her death read: "Zaha Hadid was widely regarded to be the greatest female architect in the world today". She is buried between her father Mohammed Hadid and brother Foulath Hadid in Brookwood Cemetery in Brookwood, Surrey, England. In her will she left £67m, and bequeathed various amounts to her business partner and family members. Her international design businesses, which accounted for the bulk of her wealth, were left in trust. 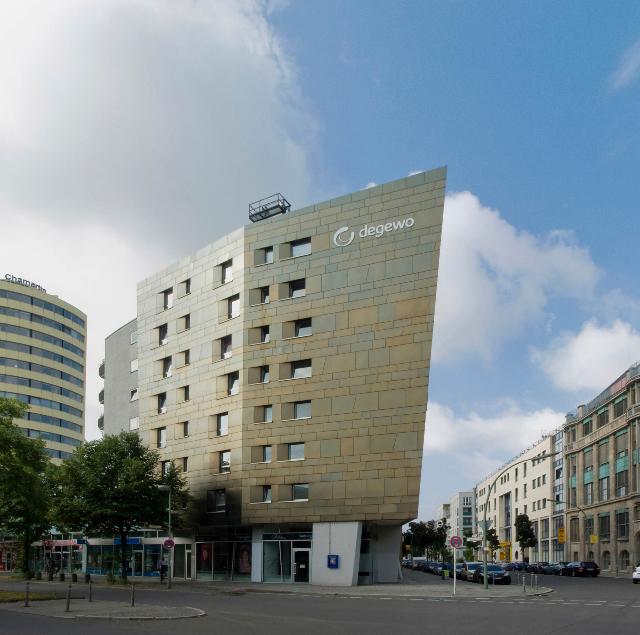 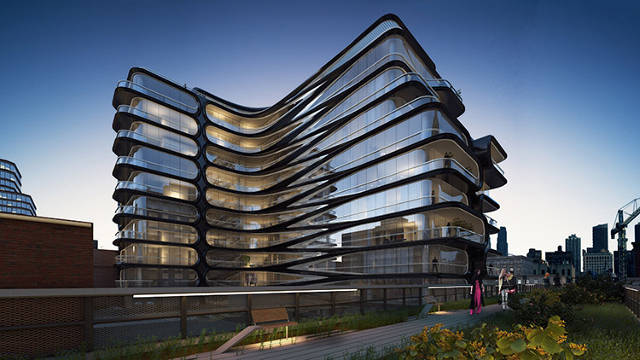 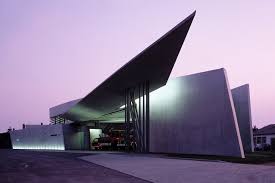 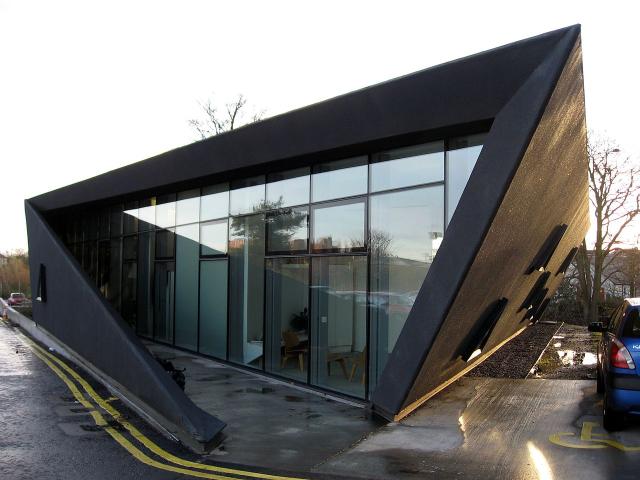 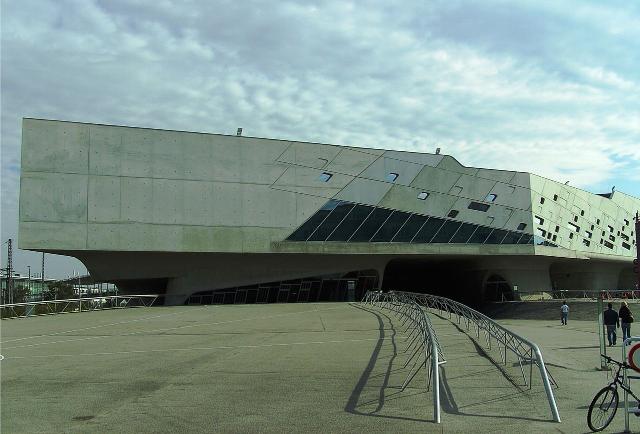 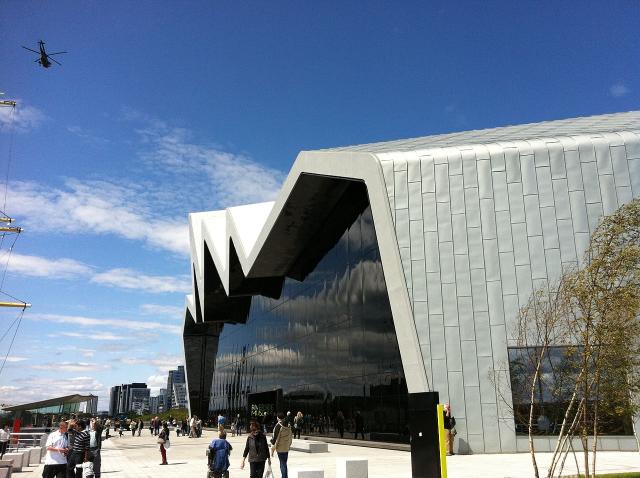 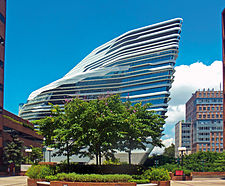 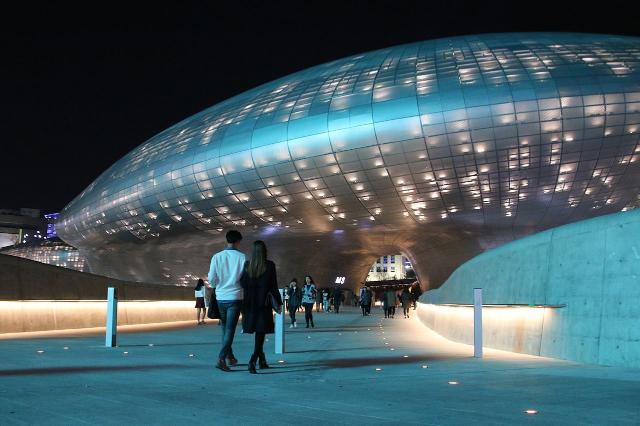 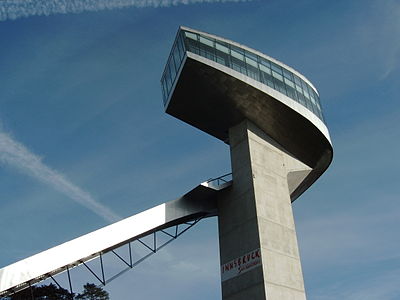 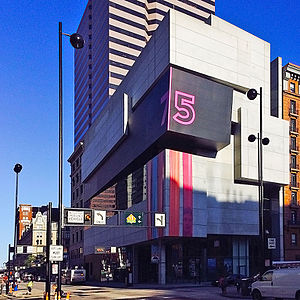 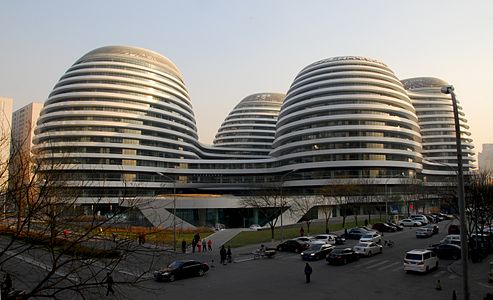 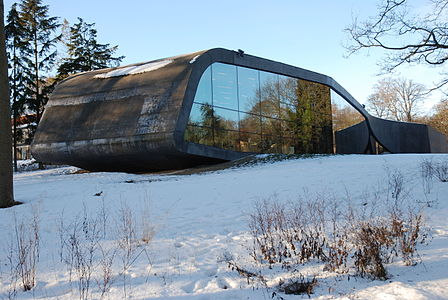 Sometimes called the "Queen of the curve", Hadid was frequently described in the press as the world's top female architect. although her work also attracted criticism. The Metropolitan Museum in New York cited her "unconventional buildings that seem to defy the logic of construction." Her architectural language was described as "famously extravagant" and she was accused of building "dictator states." Architect Sean Griffiths characterized Hadid's work as "an empty vessel that sucks in whatever ideology might be in proximity to it."

She was unmarried and had no children.