(This work is a philosophical treatment of the human activ...)

This work is a philosophical treatment of the human activity of remembering as it occurs both in fiction and in life, and as a hermeneutical act. The author begins her treatment by tracing the way numerous authors within the mainstream history of philosophy have basically denigrated the role of memory in the constitution of reality in favor of a more easily measurable physical construct. She then turns to a treatment of more contemporary thinkers about the subject, finding the work within the phenomenological tradition. Includes a discussion on how narrative functions in relation to memory in terms of the nature of human identity and history, and how we remember what makes sense to us in terms of the ongoing story of our lives, or in the case of history, according to one of the various models of historical interpretation. Contents: Philosophical Theories of Memory: Some Paradigms; Eucharistic Anamnesis: Remembering as a Form of Life; Remembering and Narrative; Remembering Temporality; Remembering and Identity; Remembering and Imagining; Atwood's Surfacing: Remembering in the Reconstruction of Identity; and Bellow's Henderson The Rain King: Narrative as Anamnesis. 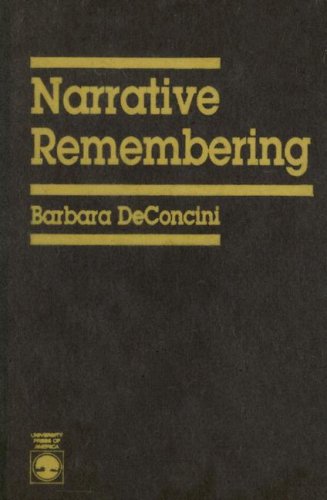