The Genius Of Charlie Parker

Bird at the Roost / Savoy Years

Charlie Parker was an American alto saxophonist, composer, and bandleader, a lyric artist generally considered the greatest jazz saxophonist. Parker was the principal stimulus of the modern jazz idiom known as bebop, and - together with Louis Armstrong and Ornette Coleman - he was one of the three great revolutionary geniuses in jazz.

Parker attended Catholic schools and, not long after, became a student at Charles Sumner Elementary. At 16 he quit school to play music. Having never received any formal musical instruction, he practed relentlessly using exercise books. He spent hours trying to imitate the Lester Young tenor saxophone solos featured on recordings by the Count Basie Band. 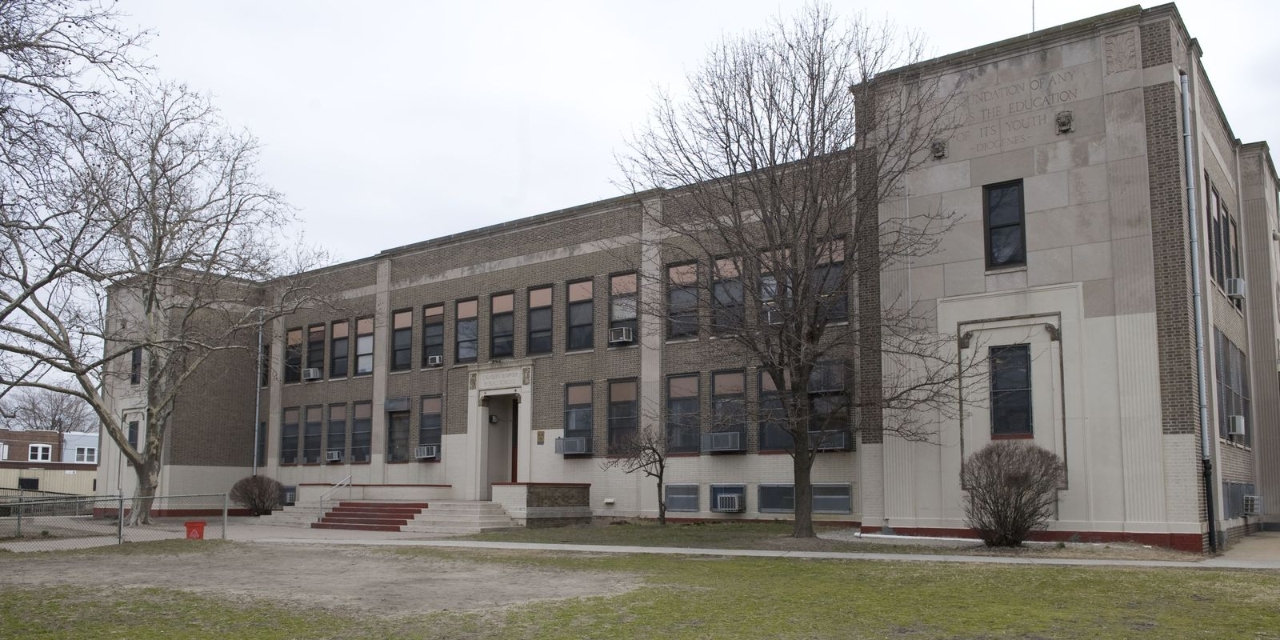 In 1937 Parker worked in Ozark mountain resort clubs, including a four-month stint with George E. Lee’s band. The job with Lee’s band afforded Parker ample time for private practice. Back in Kansas City, he broadened his musical knowledge by performing with another influential saxophonist, Buster “Prof” Smith.

In 1938 Parker performed for several months with pianist Jay McShann’s Sextet, and then moved on to New York City. Unable to find musical work in New York City, he washed dishes at Jimmy’s Chicken Shack in Harlem. While working at Jimmy’s, Parker had the opportunity to hear the brilliant house pianist, Art Tatum. Eventually, Parker performed at dime dance halls and jam sessions. At Don Walls’ Chili House, his interaction with guitarist Bill “Biddy” Fleet expanded his knowledge of harmony and chord substitutions. Parker also took part in jam sessions at Clark Monroe’s Uptown House in Harlem, where he worked out brilliant lines over the changes of pop standards such as his favorite showpiece, “Cherokee.”

After returning to Kansas City in 1940, Parker joined Jay McShann’s big band and was put in charge of organizing the reed section. In April of 1941, Parker made his first commercial recordings with McShann’s orchestra, including the Decca side “Hootie Blues.” His playing on this slow blues number, though ignored by critics at the time, made an immediate impression on many saxophonists. In January of 1942 Parker opened at Harlem’s Savoy Ballroom. When he was not performing with McShann’s orchestra, he sat in at Harlem jam sessions held at Monroe’s and Minton’s Playhouse. At these impromptu performances, Parker joined other jazzmen in experimenting with small ensembles and playing extended solos over complex harmonic forms built upon standard song and compositional forms.

Although Parker’s talent impressed his contemporaries at the jam sessions, his worsening drug habit forced McShann to fire him. Parker then bided his time between jam sessions and freelance work until December of 1942 when, through the intercession of Billy Eckstine and trumpeter Benny Harris, he found work as a tenor saxophonist in Earl “Fatha” Hines’ big band which included vocalist Sarah Vaughan. However, Parker’s erratic behavior forced Hines to fire him after only eight months with the band.

In 1944 Parker joined Billy Eckstine’s innovative bebop big band. He often shared the bandstand with Dizzy Gillespie and several other former alumni of the Hines orchestra, including Sarah Vaughan. After a few months, Parker left Eckstine’s band and played on 52nd Street with saxophonist Ben Webster, and later worked with trumpeter Cootie Williams. In February of 1945, Parker collaborated with Gillespie on sessions for the Guild label which produced the numbers “Groovin’ High” and “Dizzy Atmosphere. ” Three months later, a session for Guild yielded “Salt Peanuts,” “ShawNuff,” “Hot House,” and “Lover Man” with vocalist Sarah Vaughan.

In the fall of 1945, Parker and Gillespie landed a job at the Three Deuces. Shortly thereafter, Parker’s irresponsibility and disregard for promptness caused Gillespie to quit the group. Parker subsequently hired trumpeter Miles Davis to perform in a quintet which included drummer Max Roach. A month after opening at the Three Deuces, Parker debuted on the Savoy label. Under the name “Charlie Parker’s Reboppers,” Parker, Gillespie, Davis, Russell, and Roach recorded the classics “Ko Ko” and “Now’s the Time.”

As a member of the Dizzy Gillespie sextet, Parker traveled to Hollywood in December of 1945 to perform at Billy Berg’s, a one-story stucco building on Vine Street. Billed with the popular acts Slim Gillard and Henry “The Hipster” Gibson, the sextet played to packed houses. With the exception of a small circle of followers, however, the reaction to the sextet’s modern sound was met with indifference. After finishing their stint at Berg’s, Parker and Gillespie recorded several sessions for Hollywood record store owner Ross Russell. As a result of poor organization and personnel problems, these first sessions for Russell’s newly formed Dial label yielded little material. When Gillespie’s band returned to New York, Parker stayed behind in Los Angeles and continued to record for Dial. Parker then took a job playing in Howard McGhee’s group at the Club Finale. He also attended several Dial recording sessions which produced a wealth of music including “Yardbird Suite,” “Moose the Mooche,” and “A Night in Tunisia.”

Despite the fine musicianship Parker displayed on the Dial recordings, his personal life was in shambles. He was living in poverty and suffering from drug withdrawal. On July 29, 1946, Parker attended a Dial recording session. Later that night a fire, presumably caused by careless smoking, destroyed his room at the Civic Hotel. Earlier that evening, Parker was seen wandering around the hotel lobby wearing only his socks. He was arrested and held in the psychiatric ward of the East Los Angeles Jail. Charged with arson, indecent exposure, and resisting arrest, Parker served a six-month term at the Camarillo State Hospital. He was released in January of 1947 and periodically experienced episodes of good health, only to succumb to eating binges and further drug abuse. Before returning to New York, Parker participated in recording sessions for Dial with pianist Erroll Garner, Howard McGhee and Wardell Gray.

After recovering from a breakdown caused in part by drug addiction and alcoholism, he resumed bandleading, initially with a quintet that included Davis and drummer Max Roach; among their recordings were "Donna Lee," "Embraceable You," "Klactoveedsedstene," and "Scrapple from the Apple.” In December of 1948 and January of 1949, Parker recorded with Machito’s Afro-Cuban orchestra for the Verve label. In May of 1949, Parker made his European debut at the Paris International Festival of Jazz. That same year, Parker hired trumpeter Red Rodney. In November of 1949, Parker recorded with a string section conducted by Mitch Miller. The session yielded the smash hit, “Just Friends.”

Parker continued to lead groups into the 1950's, but never recaptured his early success. In 1950 and 1952, he continued to perform and record with string quartets and other small groups. In March of 1951 and January of 1952, Parker recorded his Latin-inspired album, South of the Border. This album, released on the Verve label, contained his popular number “My Little Suede Shoes.” In 1953 Parker joined Dizzy Gillespie, Max Roach, bassist Charles Mingus, and pianist Bud Powell for a performance at Toronto’s Massey Hall. Around this time, Parker’s constant drug use began to take its toll. Although he was still capable of delivering fine performances, his reputation for showing up in mid-performance or missing entire shows often forced club owners to hire Parker on a per set basis. After being admitted twice to Belle vue psychiatric hospital in 1954, Parker attempted suicide. On March 4, 1955, he made his final appearance at Birdland – the club named in his honor. 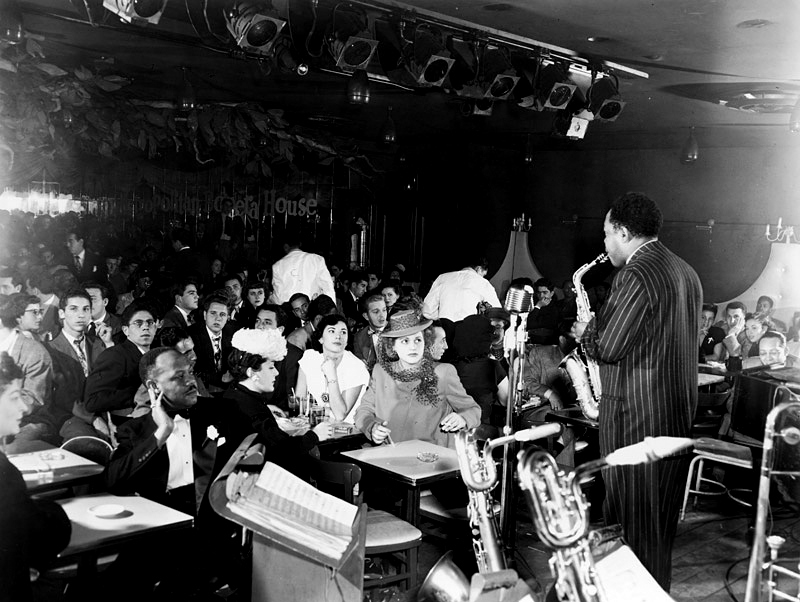 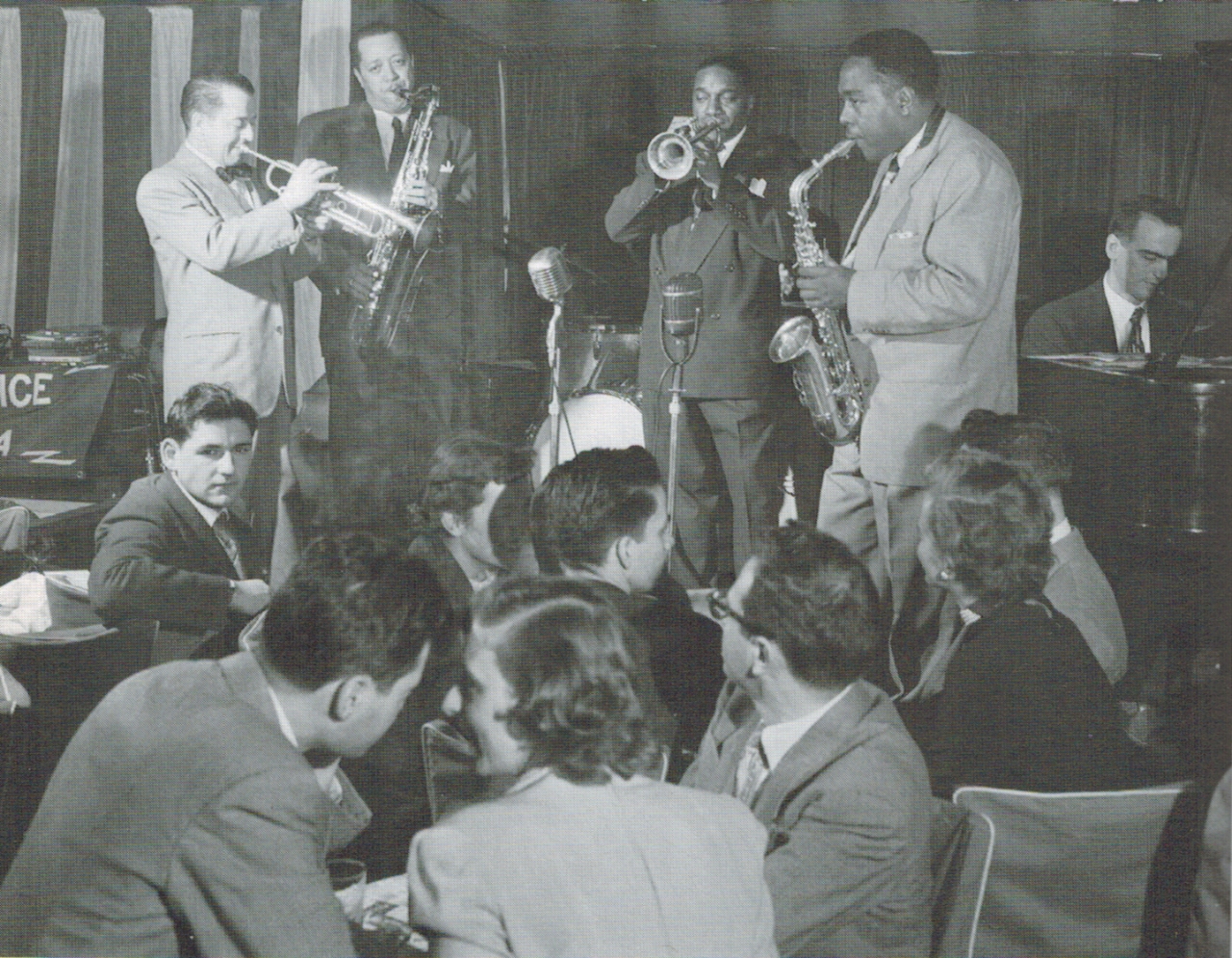 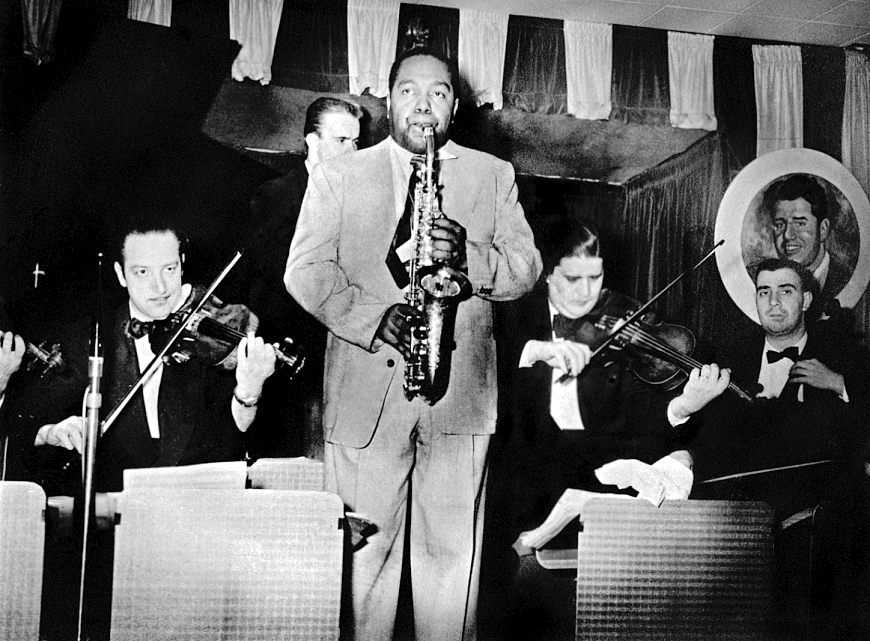 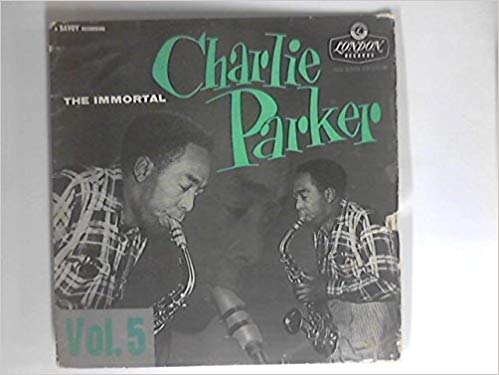 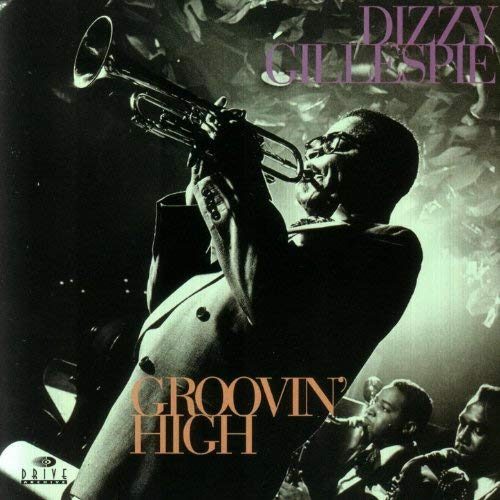 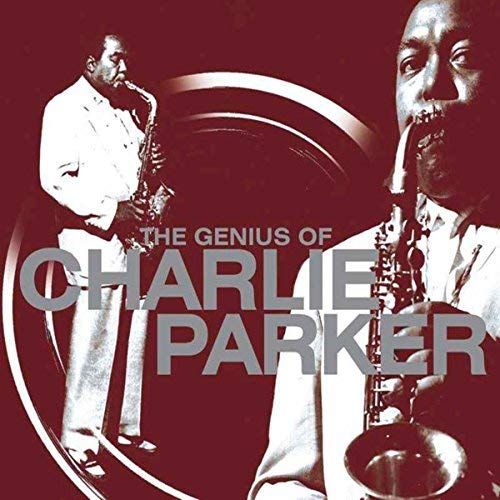 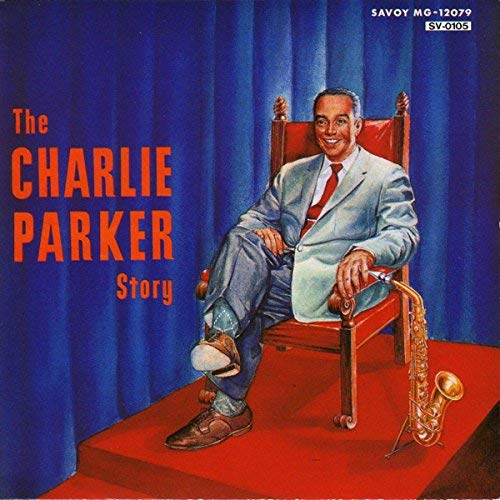 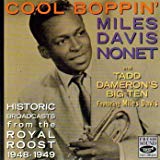 Quotations: "Ever since I've ever heard music, I thought it should be very clean, very precise — as clean as possible, anyway, and more or less tuned to people. Something they could understand, something that was beautiful, you know? Because definitely there are stories and stories and stories that can be told."

Parker had the aural equivalent of a photographic memory, and on a whim could incongrously and instantaneously plop anything he might hear - from opera to pop song - into a bop context.

Parker's life was riddled with depression and heroin addiction. This addiction caused him to miss performances and be considered unemployable. He frequently resorted to busking, receiving loans from fellow musicians and admirers, and pawning his saxophones for drug money. Heroin use was rampant in the jazz scene, and users could acquire it with little difficulty.

In July 25, 1936 Parker married Rebecca Ruffin. The couple had two children before divorcing in 1939. In 1942, Parker remarried to Geraldine Scott. Financial stresses created a rift between the couple, and Parker turned to heroin for an escape. He ended up leaving his second wife not long after they were married.

In June 1946 Parker was committed to a mental hospital, where he stayed until January of 1947. Newly clean in 1948, Parker married Doris Snyder, but the marriage fell apart within less than a year when Parker started using again. His heroin abuse only increased after the divorce.