A Contradiction Still: Representations of the Feminine in the Poetry of Alexander Pope

( This book offers a stimulating critique of the views co...)

This book offers a stimulating critique of the views concerning gender and gender roles expressed or implied in Pope’s poetry. Christa Knellwolf approaches Pope's stylistic complexity revealing it as an effect of his engagement with a historical situation in which the position of women was one of the most prominent sources of ideological conflict. She provides a detailed discussion of Pope’s poetic language and relates it to the wider context of publication in which male writers defended the masculine privilege of literary authorship against intellectual women. An attentive close-reading of the poetry reveals Pope's conflicting attitudes towards women and explains them as a product of his difficulties with a society that was experiencing rapid political and cultural change. His contradictory views of femininity are examined in contrast to his self-appointed role as an artist who exercised the prerogative of criticizing the taste of contemporary readers. Knellwolf shows him to be torn between mourning the loss of an old order and fighting for a place in the new social hierarchy. She identifies this conflict with contemporary struggles over the definition of identity and gender, and thus makes a strong case for the reappraisal of Pope’s poetry in the context of gender politics.

Knellwolf, Christa was born on September 30, 1965 in Frauenfeld, Switzerland. Daughter of Julius Knellwolf and Emma Knellwolf-Ammann. 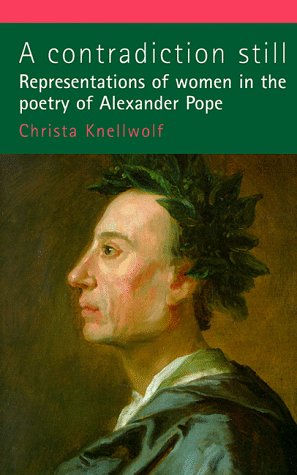