Africanisation, Nationalisation and Inequality: Mining Labour and the Copperbelt in Zambian Development (Department of Applied Economics Papers in Industrial Relations and Labour) 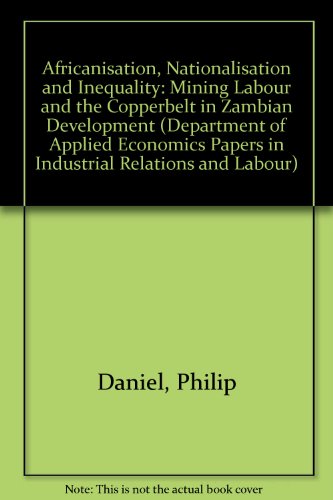 Since my dissertation, work on various aspects of the demand for labour, including: studies of substitution among workers of different demographic groups. Attempts to provide better estimates of the aggregate labour demand elasticity. Examination of how the minimum wage affects labour demand.

And applications of these and other estimates to the evaluation of current and proposed labour-market policies.

Beginning in the mid-1970s substantial work on the economics of social insurance, including: studies of labourforce participation induced by unemployment insurance. Analysis of effects of unemployment insurance and social security on consumption and wealth holdings. And examination of the effect of increased life span on the success of social security in maintaining consumption.

In general, attempts to understand the institutional details of these programmes in order to model and estimate their effects more carefully, especially their ability to meet their original goal of maintaining consumption.