( This classic text has proven its worth in university cl...)

This classic text has proven its worth in university classrooms and as a tool kit in research--selling over 40,000 copies in the United States and abroad in its first edition alone. Users have included undergraduate and graduate students of economics and business, and students and researchers in political science, sociology, and other fields where regression models and their extensions are relevant. The book has also served as a handy reference in the "real world" for people who need a clear and accurate explanation of techniques that are used in empirical research. Throughout the book the emphasis is on simplification whenever possible, assuming the readers know college algebra and basic calculus. Jan Kmenta explains all methods within the simplest framework, and generalizations are presented as logical extensions of simple cases. And while a relatively high degree of rigor is preserved, every conflict between rigor and clarity is resolved in favor of the latter. Apart from its clear exposition, the book's strength lies in emphasizing the basic ideas rather than just presenting formulas to learn and rules to apply. The book consists of two parts, which could be considered jointly or separately. Part one covers the basic elements of the theory of statistics and provides readers with a good understanding of the process of scientific generalization from incomplete information. Part two contains a thorough exposition of all basic econometric methods and includes some of the more recent developments in several areas. As a textbook, Elements of Econometrics is intended for upper-level undergraduate and master's degree courses and may usefully serve as a supplement for traditional Ph.D. courses in econometrics. Researchers in the social sciences will find it an invaluable reference tool. A solutions manual is also available for teachers who adopt the text for coursework. Jan Kmenta is Professor Emeritus of Economics and Statistics, University of Michigan.

9, Review of Economics and Statistics, since 1975, Metrika, since 1980, State Hefte, since 1984. Association Book Review Editor, Journal of the American Statistical Association, since 1973. 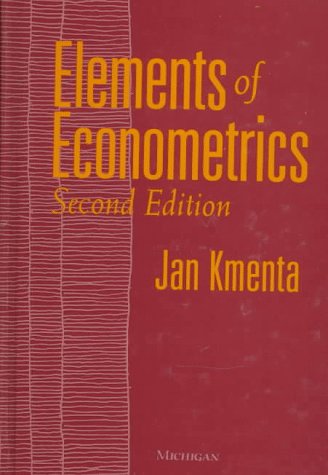 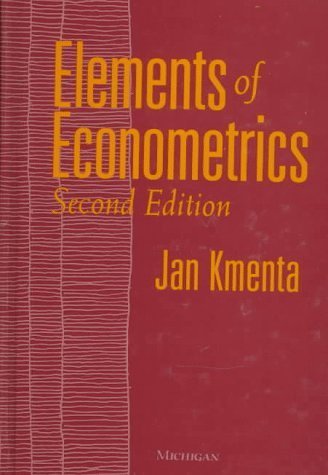 focussed mainly on formulation and estimation of production models and included the development of a simple approximation to the CES production function. Other efforts involved a construction and estimation of an econometric model of Australia, the purpose of which was to determine the economic effects of immigration. Later work dealt with a variety of theoretical and applied econometric problems in both micro and macro areas.

The textbook, Elements of Econometrics, was designed for the second and further generations of the post-scientific-revolution students of economics whose mathematical sophistication was matched by few in the preceding generation. Most of the writing — and teaching — has been characterised by an emphasis on a careful and thoughtful specification of the stochastic properties of models, and by a strong attempt to avoid ‘mindless mathematics’ and to achieve simplicity through a systematic development of thought and a clarity of exposition.