The evidences of Christianity,: With an introduction on the existence of God and the immortality of the soul

Ebenezer Dodge was an American clergyman, theologian, educator. He was a pastor of the Baptist Church at New Hampton.

Ebenezer Dodge was born on April 21, 1819 at Salem, Massachusetts, United States. He was the son of a sea captain, whose name he bore, and Joanna (Appleton) Dodge.

Little is known of his youth save that his early religious influences came from his mother, while his pastor, Reverend Lucius Bolles of the Baptist Church, gave him a broader world horizon which doubtless had been extended by the maritime associations of his boyhood.

At the age of seventeen, Dodge entered Brown University from the Salem Latin School, having the legal profession in view.

His native scholarly talent was greatly stimulated by Francis Wayland, president of the University, from which he was graduated in 1840.

Before proceeding to his theological studies, he served as principal of the academy at Shelburne Falls for two years and then entered Newton Theological Institution, graduating in 1845. Here the influence of Barnas Sears was especially important upon him.

Ebenezer was a teacher in an embryonic theological school at Covington, Kentucky.

Ebenezer became pastor of the Baptist Church at New Hampton (1846 - 49) and at New London, New Hampshire. In various ways he participated in the broader interests of the churches; in 1848, he made a penetrating report upon some questions at issue connected with the American and Foreign Bible Society.

In 1848, he made a penetrating report upon some questions at issue connected with the American and Foreign Bible Society.

In November 1853 he was elected professor of Biblical criticism in the Theological Institution at Hamilton, New York, and also professor of the evidences of revealed religion in Madison University (now Colgate), beginning his services the following month.

In 1858—59 he spent more than a year in Europe, where he became especially well acquainted with the eminent theologians, Tholuck and Dorner.

In 1861, he was transferred to the chair of doctrinal theology in the Seminary and in 1868 he was elected president of Madison University, retaining the professorships he already held, which had come to include psychology and Christian ethics.

His administration of the University was marked by substantial progress in the development of the productive assets and by adjustments in the educational program to meet the changing conditions.

The secondary and the theological instruction were both separated from the collegiate, the resultant Academy and the relatively more free Seminary being given his sympathetic and honest support. 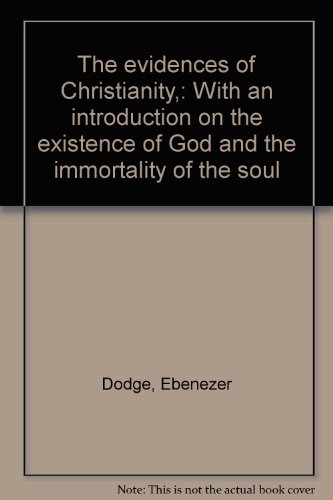 A religious revival in the college awakened in him a positive conception of the Christian life, so that what he considered his conversion (see One Honest Effort, tract issued by the American Tract Society) was almost identical with his call to the ministry.

Long after his death, the traditions of his strength of character, his catholicity of feeling and his unselfish disinterestedness were still current on the campus, with many a striking epigram.

Dodge was twice married: first, in 1846 he married Sarah Abbot Putnam of Salem, who died in 1861; and in 1863 Eleanor F. Rogers of Providence, Rhode Island, who survived him.