(Public parks are administered at all levels of government...)

Public parks are administered at all levels of government-local, county, state, and national. In Parks, People, Preservation, and Public Policy, author Eleanor Boggs Shoemaker examines the York County, Pennsylvania, Parks and Recreation Department and analyzes the underpinnings of its success. From its inception in 1968, Shoemaker, an ardent volunteer for York County Parks and Recreation, provides an in-depth look at the park system beginnings, its land acquisition, its development, and subsequent public enjoyment and support. Parks, People, Preservation, and Public Policy tightly documents the York County Parks' success formula in a lively commentary filled with many human interest details. A thorough appendix includes a timetable of significant accomplishments, charts, parks' descriptions, and lists of board commissioners, directors, advisory board members, park and recreation staff, and friends of the park system. With almost 4,500 acres of park area, the York County Parks serve as a model of a successful system that preserves open space for all ages of citizens for years to come. 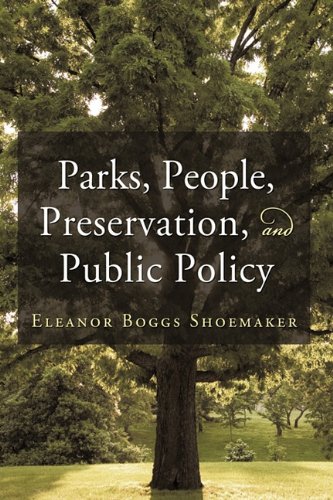