American Academy of Arts and Sciences

Friedrich Bessel was a German astronomer, mathematician, physicist, and geodesist. Bessel established the modern ideals and standards of precision in astronomy and obtained the first measurement of the distance to a star. and was the first to measure accurately the parallax. He also used a method of mathematical analysis involving what is now known as the Bessel function.

Friedrich Bessel was born on July 22, 1784, in Minden, North Rhine-Westphalia, Germany, to Carl Friedrich Bessel, a government secretary, and his wife Friederike Ernestine, the daughter of a pastor from Rehme, as one of 9 children (3 sons, 6 daughters); the family originated from the Calenberg village near Hannover.

Bessel attended the Gymnasium in Minden but left after four years, with the intention of becoming a merchant’s apprentice. At school, he had had difficulty with Latin, and apart from an inclination toward mathematics and physics, he showed no signs of extraordinary talent until he was fifteen. Later, after studying on his own, Bessel wrote extensively in Latin, apparently without difficulty. In January 1799, at the age of 14, he left school to become an apprentice to the commercial firm of Kulenkamp in Bremen. The firm was involved in the import-export business.

Bessel was especially interested in foreign trade, so he devoted his nights to studying geography, Spanish, and English, learning to speak and write the latter language within three months. In order to qualify as a cargo officer on a merchant ship, he studied books on ships and practical navigation. The problem of determining the position of a ship at sea with the aid of the sextant stimulated his interest in astronomy, but knowing how to navigate by the stars without deeper insight into the foundations of astronomy did not satisfy him. He, therefore, began to study astronomy and mathematics, and soon he felt qualified to determine time and longitude by himself.

On January 1, 1799, Bessel became an apprentice to the famous mercantile firm of Kulenkamp in Bremen, where he was to serve for seven years without pay. He rapidly became so proficient in calculation and commercial accounting that after his first year he received a small salary; this was gradually increased so that he became financially independent of his parents.

During his apprenticeship, dreaming of travel, he studied languages, geography, the habits of distant peoples, and the principles of navigation, which led him to astronomy and mathematics. Working at night, in 1804 he wrote a paper on Halley’s Comet in which he calculated the orbit from observations made in 1607.

He sent it to the German astronomer Heinrich Wilhelm Olbers, who was so impressed that he arranged for its publication that same year in the important German technical journal Monatliche Correspondenz and proposed Bessel as an assistant at the Lilienthal Observatory of the celebrated lunar observer J.H. Schröter.

Bessel, who was liked and appreciated by his commercial firm, was obliged to choose between a position of relative affluence if he remained in it and poverty and the stars if he left it. He decided on the latter. In Lilienthal, Bessel acquired practical experience in observations of comets and planets, with special attention to Saturn and its rings and satellites. At the same time, he studied celestial mechanics more intensively and made further contributions to the determination of cometary orbits.

In 1807 Heinrich Wilhelm Olbers encouraged him to do a reduction of Bradley’s observations of the positions of 3,222 stars, which had been made from 1750 to 1762 at the Royal Greenwich Observatory. This task led to one of his greatest achievements.

Bessel's brilliant work was quickly recognized and both Leipzig and Greifswald offered him posts. However, he declined both. In 1809, at the age of 26, Bessel was appointed director of Frederick William III of Prussia's new Königsberg Observatory and professor of astronomy. It was not possible for Bessel to receive a professorship without first being granted the title of doctor. A doctorate was awarded by the University of Göttingen on the recommendation of Gauss, who had met Bessel in Bremen in 1807 and recognized his talents.

Although the Observatory at Königsberg was still under construction, Bessel took up his new post in May 1810. He continued to work on Bradley's observations while work continued on the observatory from 1810 to 1813. Bessel's work had now become known internationally and he was honored with the award of the Lalande Prize from the Institut de France for his tables of refraction based on Bradley's observations.

Like nearly all great astronomers of his era, Bessel was obliged to spend part of his time surveying wherever the government wished. In 1824 he supervised the measurement of a 3,000-meter baseline in the Frischen Haff because he liked to spend a day in the fresh air once in a while. In 1830 he was commissioned to carry out triangulation in East Prussia after Struve had completed the triangulation of the Russian Baltic provinces.

In geodesy, Bessel’s contributions include a correction in 1826 to the seconds' pendulum, the length of which is precisely calculated so that it requires exactly one second for a swing. During 1831-1832 he directed geodetical measurements of meridian arcs in East Prussia, and in 1841 he deduced a value of 1/299 for the ellipticity of Earth - i.e., the amount of elliptical distortion by which Earth’s shape departs from a perfect sphere.

He was the first to make effective use of the heliometer, an instrument designed for measuring the apparent diameter of the Sun. He introduced corrected observations for the so-called personal equation, a statistical bias in measurement characteristic of the observer himself that must be eliminated before results can be considered reliable, and he made a systematic study of the causes of instrumental errors. His own corrected observations were more accurate than any previous ones, and his methods offered the way to great advances in the field.

The later achievements of Bessel were possible only because he first established the real framework of the universe by making accurate measurements of the positions and motions of the nearest stars with a heliometer built by German physicist Joseph von Fraunhofer, making corrections for various measuring errors caused by imperfections in his telescopes and by disturbances in the atmosphere.

He reduced, or systematized, the observations of the English astronomer James Bradley, correcting for the effects of instrumental errors in the mean positions of 3,222 stars and publishing the results in Fundamenta Astronomiae (1818); this work marked the beginning of modern astrometry (positional astronomy). The uniform system of reduction that Bessel established in Tabulae Regiomontanae (1830; "Königsberg Tables") long remained standard.

Having established exact positions for thousands of individual stars at his observatory in Königsberg, he was ready to observe exceedingly small but highly significant motions, relative to one another, among them. Choosing 61 Cygni, a star barely visible to the naked eye and known to possess a relatively high velocity in the plane of the sky, Bessel showed in 1838 that, after correcting for this, the star apparently moved in an ellipse every year.

This back and forth motion, called the annual parallax, could only be interpreted as being caused by the motion of Earth around the Sun. Astronomers had known for centuries that such an effect must occur, but Bessel was the first to demonstrate it accurately. (Russian astronomer Friedrich Struve had announced an inaccurate value of Vega’s parallax in 1837.) Bessel’s parallax of about one-third of a second of arc corresponds to a distance from Earth to 61 Cygni of about 10.3 light-years, though Bessel did not express it this way. (The nearest star known is Alpha Centauri, 4.3 light-years away.) Olbers, presented with these conclusions on his 80th birthday, thanked Bessel and said the gift "put our ideas about the universe for the first time on a sound basis."

Another major discovery by Bessel was that the two bright stars Sirius and Procyon execute minute motions that could be explained only by assuming that they had invisible companions disturbing their motions. The existence of such bodies, now named Sirius B and Procyon B, was confirmed with more powerful telescopes after Bessel’s death. An important share in the discovery of the planet Neptune also belongs to Bessel. In a paper read in 1840, he called attention to exceedingly small irregularities in the orbit of Uranus, which he had observed and concluded were caused by an unknown planet beyond.

From 1840 on, Bessel’s health deteriorated. His last long trip, in 1842, was to England, where he participated in the Congress of the British Association in Manchester. His meeting with important English scientists, including Herschel, impressed him deeply and stimulated him to finish and publish, despite his weakened health, a series of works. After two years of great suffering, Bessel died of cancer. He was buried near the observatory. 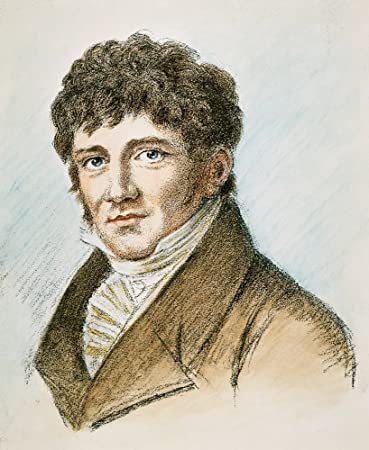 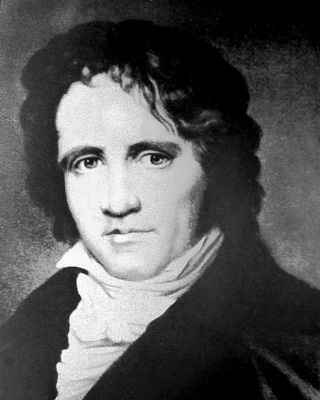 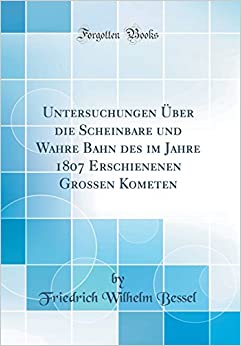 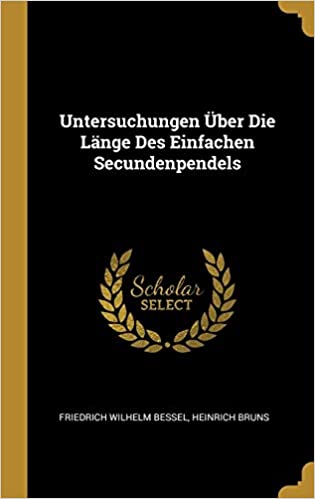 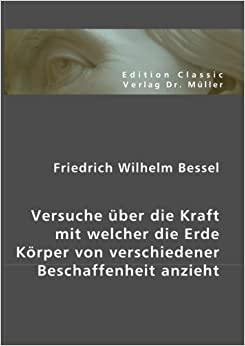 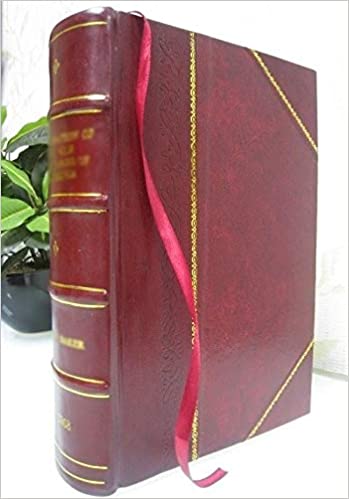 Bessel found relaxation from his intensive work in daily walks and in hunting.

Physical Characteristics: Bessel was small and delicate, and in his later years he appeared prematurely aged because of his markedly pale and wrinkled face.

Friedrich Bessel married Johanna Hagen in 1812. They had two sons and three daughters. The marriage was clouded by sickness and by the early death of both sons.