The Sorrows of Cupid

(This historic book may have numerous typos and missing te...)

This historic book may have numerous typos and missing text. Purchasers can download a free scanned copy of the original book (without typos) from the publisher. Not indexed. Not illustrated. 1912. Excerpt: ... CHAPTER XH GOD'S IMAGE BESOTTED Drunkenness is a most fruitful cause for divorce and the whole question of drink and drunkenness is one worthy of more intelligent study than has even been bestowed upon it. It is not a question to be dismissed as impossible of solution, nor can it be solved on the basis of morality. It is a deep study and one that leads an intelligent student out of the realm of religion, morals and ethics into the science of human life. It is not sufficient to say that drunkenness has always existed and ever will. Nothing exists without cause, and the scientist can trace the cause of drunkenness as readily and scientifically as the cause of prostitution or any other social disease. The time is past when men and women interested in the real advancement of the race are satisfied with the theory of "natural depravity." They refuse to lay the blame of every social ill on the shoulders of poor old Eve. Eve has been a useful scapegoat, but man is slowly developing a little moral backbone of his own and has traveled far enough along the road of progress to have the courage to shoulder his own sins. In the superficial and sporadic attempts that have been made in dealing with the liquor problem, we have been divided into two camps--the "wets" and the "drys." Both sides have ignored common sense and science and indulged in far-fetched, glittering generalities. The "drys' have depended upon frenzied religious tirades against the 'Demon Rum." For them he is the most powerful demon of all time. Greater than God himself, for he has debased and debauched men created in the image and likeness of the Creator: swayed governments, ruled kings, robbed men, ruined women and murdered children. Judging from the propaganda of the church and temperance forces, Go...

Socialism and The World War

(Full Title:Socialism and The World War Description: The ...)

Full Title:Socialism and The World War Description: The Making of the Modern Law: Trials, 1600-1926 collection provides descriptions of the major trials from over 300 years, with official trial documents, unofficially published accounts of the trials, briefs and arguments and more. Readers can delve into sensational trials as well as those precedent-setting trials associated with key constitutional and historical issues and discover, including the Amistad Slavery case, the Dred Scott case and Scopes "monkey" trial.Trials provides unfiltered narrative into the lives of the trial participants as well as everyday people, providing an unparalleled source for the historical study of sex, gender, class, marriage and divorce. ++++ The below data was compiled from various identification fields in the bibliographic record of this title. This data is provided as an additional tool in helping to insure edition identification: ++++ Monograph Harvard Law School Library St. Louis, Mo.: Published by Frank P. O'Hare Box 1013, c.1917

In prison: Being a report by Kate Richards O'Hare to the President of the United States as to the conditions under which women federal prisoners are confined in the Missouri State Penitentiary

(This scarce antiquarian book is a facsimile reprint of th...)

This scarce antiquarian book is a facsimile reprint of the original. Due to its age, it may contain imperfections such as marks, notations, marginalia and flawed pages. Because we believe this work is culturally important, we have made it available as part of our commitment for protecting, preserving, and promoting the world's literature in affordable, high quality, modern editions that are true to the original work.

Katherine was born on March 26, 1877, in Ottawa County, Kansas, to Andrew Richards and Lucy (Thompson) Richards. Christened Kathleen, she was the fourth of five children and the second of two daughters. Her father, a partially disabled Civil War veteran, operated a prosperous stock ranch until ruined by the drought of 1887. Thereafter, his search for work took him to Kansas City, Missouri, where, after securing employment as a machinist, he brought his family.

Kate obtained her public education in the Ottawa County district school, a grammar school in Minneapolis, Kansas, and a rural high school in Burchard, Nebraska.

Choosing an unusual ocupation for a young woman of her generation, Katherine went to work in her father's shop in 1894 as an apprentice machinist and eventually became a member of the union, the International Association of Machinists. At that time in her life she was a devout Protestant (Campbellite) who devoted considerable time to temperance and to saving "fallen women. " Before long, however, the reality of urban poverty, especially during the depression of 1893, made Kate realize that "prayers never fill an empty stomach or avoid a panic. " She began to read Henry George and Henry Demarest Lloyd, whose writings taught her that poverty caused vice and intemperance and that the true crusader fought causes and not effects.

After hearing a speech by Mary Harris "Mother" Jones, she joined the Socialist Labor party in 1899. Two years later, in common with the majority of American socialists, she left the SLP for the just-formed Socialist party of America (1901). For the next twenty-five years, she served as one of the nation's most effective socialist lecturers and organizers.

In 1901 she attended the International School of Social Economy, a Socialist party training school in Girard, Kansas, where she met her first husband, Francis (Frank) Patrick O'Hare, a student-teacher at the school. She and the Iowa-born, St. Louis-educated O'Hare, a Roman Catholic by birth and belief, were married on January 1, 1902. Immediately after their wedding, the O'Hares crisscrossed the Midwest on a Socialist party lecture and organizing tour.

Over the next fifteen years Kate O'Hare probably covered more territory and delivered more socialist lectures than any other American, appearing in every state, as well as in Canada, Mexico, and Great Britain. Her greatest successes, however, were won in the Great Plains states of Oklahoma and Kansas, where an effective synthesis of evangelistic and socialistic rhetoric in a setting patterned on a religious camp meeting attracted thousands of small dirt farmers to the Socialist party.

Like many women in the Progressive era, O'Hare also worked actively for woman's suffrage, although, like most radical women of her generation, she always believed the socialist cause more important than the woman's cause.

Not only was she a popular speaker, but she was also a prolific writer. Her published pamphlets such as "Law and the White Slaves, " "Common Sense and the Liquor Question, " and others on the church gained wide circulation; a 1904 novel about socialism, "What Happened to Dan?", won many readers. In about 1912, O'Hare and her husband became coeditors and copublishers of the National Rip-Saw, a St. Louis socialist monthly that featured muckraking articles. (It was renamed Social Revolution in 1917. )

Socialist party members showed their admiration for O'Hare by electing her to the party's National Women's Committee (1910 - 1912) and choosing her as the only female to serve as an international secretary for the party (1912 - 1914) during the Second International. She also ran as the party's candidate for Congress from a Kansas district in 1910. Throughout this time, she associated with the more militant and leftist elements in the party and was a close friend of Eugene Victor Debs.

Like most American socialists, O'Hare opposed American involvement in World War I. In her own words: I am "not pro-English; not pro-German; not pro-American, " but simply "pro-working class. " Her antiwar sentiments led party members to select her as chairman of the Committee on War and Militarism at the 1917 St. Louis Emergency Convention. The committee submitted a majority report, approved by the convention delegates, that condemned United States intervention.

In line with her own beliefs and the party's official position, O'Hare traveled throughout the nation in 1917 presenting an antiwar lecture, "Socialism and the World War. " After delivering that speech at Bowman, North Dakota, on July 17, 1917, she was indicted by the federal government under the wartime Espionage Act, found guilty, and sentenced to a five-year term in the Missouri State Penitentiary, beginning on April 15, 1919. Among her fellow prisoners was the anarchist Emma Goldman.

She continued to write and participate in socialist politics in prison and published Kate O'Hare's Prison Letters (1919) and In Prison (1920), the latter reissued in 1923 to favorable reviews.

In 1919 she was one of four Americans elected as international representatives to the annual conferences of the Second International of the Socialist party and the following year was a leading candidate for the party's vice-presidential nomination. In May 1920 the Justice Department commuted her sentence in response to a nationwide socialist and civil-libertarian amnesty campaign. President Calvin Coolidge later granted her a full pardon.

After her release from prison, she and her husband continued their activities for the Socialist party, resuming their lecture work and editing their monthly paper, Social Revolution. But the decline of socialism and the collapse of third-party politics in the election of 1924 disillusioned her. Perhaps more important, her prison experiences convinced her of the need to crusade for penal reform. In 1922 the O'Hares organized the Children's Crusade, a march on Washington by children of still imprisoned opponents of the war to demand immediate amnesty. Later she directed an investigation of prison contract labor that resulted in congressional legislation in 1929 outlawing the worst features of the convict labor system.

The O'Hares still found time for utopian ventures; they moved to Leesville, Louisiana, in 1922, and joined the Llano Co-operative Colony, a settlement modeled after nineteenth-century utopian communities. There they resumed publication of their paper, now retitled the American Vanguard, and founded Commonwealth College, a school for workers' education. Sectarianism split the community and the college; the Vanguard was terminated and the college was moved to Mena, Arkansas, in 1925, where Kate O'Hare served as a teacher and dean of women.

In June 1928 she divorced and on November 28 married Charles C. Cunningham, a San Francisco attorney and mining engineer. She lived in California for the remainder of her life. In 1934 she campaigned actively in Upton Sinclair's End Poverty in California (EPIC) movement and in his gubernatorial campaign. Appointed assistant director of the California Department of Penology by Governor Culbert L. Olson in 1939, she helped introduce a substantial prison reform program that made California's penal system one of the nation's most humane. She left the department after a year and later, at the invitation of Governor Earl Warren, attended sessions of the State Crime Commission.

She died at home in Benecia, California, in January 1948 of a coronary thrombosis; her remains were cremated. 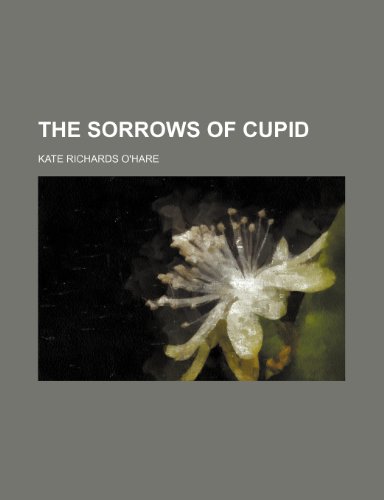 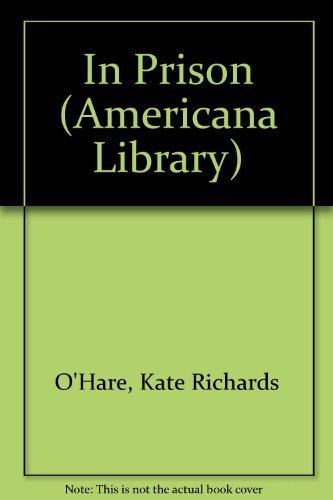 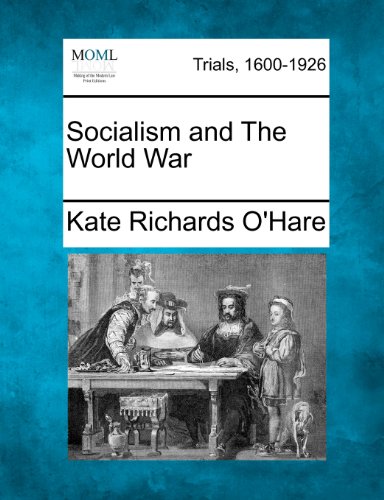 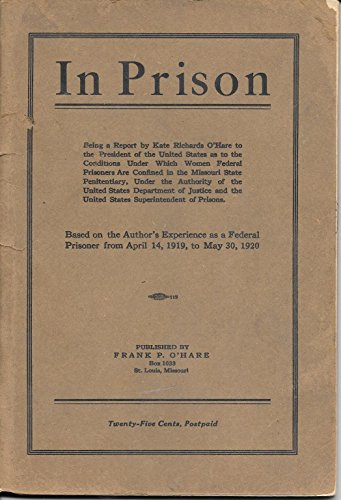 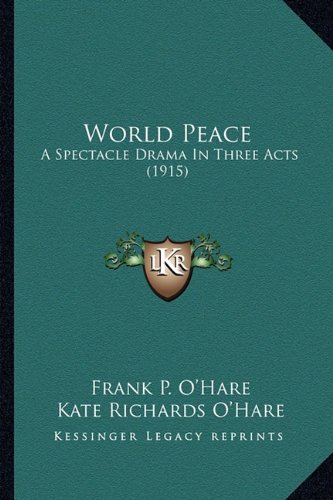 Kate O'Hare became a member of the Socialist Labor in 1899 but two years later she left the SLP for the Socialist party of America (1901).

She also was a chairman of the Committee on War and Militarism at the 1917 St. Louis Emergency Convention.

Kate was an active member in Upton Sinclair's End Poverty in California (EPIC) movement in 1934.