Other photo of Konstantin Chernenko

(Born into a large and poor Siberian peasant family, Konst...)

Born into a large and poor Siberian peasant family, Konstantin Chernenko, the new leader of the Soviet Union, joined the Young Communist League when he was 15. He was a close adviser to President Brezhnev, and the top Party and Government jobs which he had held in Moscow over the period of 20 years prepared him for a smooth take-over of the leadership of his country. This selection of Konstantin Chernenko's Speeches and Writings, made during the years 1975 to 1984, including his acceptance speech on his election as General Secretary of the CPSU Central Committee, provides a wide-ranging introduction to the opinions and views of the new Soviet leader.

What it Means to be COMMUNISTS IN THE USSR: Their View of Life, How They Organise a People's Party

Chernenko was born to a poor family in the Siberian village of Bolshaya Tes (now in Novosyolovsky District, Krasnoyarsk Krai) on 24 September 1911. His father, Ustin Demidovich (of Ukrainian origin), worked in copper mines and gold mines while his mother took care of the farm work.

Strongly believing in the value of education, from 1943 to 1945 Chernenko attended the Moscow High School of Party Organizers (a solid stepping stone for promotion) and after finishing the courses, he was given a series of more and more important assignments.

He himself enrolled in the Kishinev Pedagogical Institute and in 1953 he completed a correspondence course for schoolteachers. Chernenko also promoted the translation of Lenin's works into Moldavian.

In 1933 he worked in the Propaganda Department of the Novoselovo District Party Committee and, a few years later, was promoted head of the same department in the Uyarsk Raykom.

In 1938 Chernenko became the Director of the Krasnoyarsk House of Party Enlightenment then in 1939, the Deputy Head of the AgitProp Department of Krasnoyarsk Territorial Committee and finally, in 1941 he was appointed Secretary of the Territorial Party Committee for Propaganda.

In 1945 he served as the Party Secretary for Ideology at Penza Provincial Committee and in 1948 he was nominated Head of the Agitation and Propaganda (AgitProp) Department of the Central Committee of the Communist Party of Moldova (one of the Soviet Union's 15 republics).

It was the turning point in Chernenko's career. The tasks of economic and ideological reconstruction in this newly acquired and largely Romanian corner of the USSR were formidable and put Chernenko to the test which he passed with flying colors. He successfully combined ideological work with journalism (writing for the newspaper Sovetskaya Moldavia), always paying much attention to improving the educational and theoretical level of leading cadres.

It was in Moldova that he developed a close association and friendship with Leonid Brezhnev, the First Secretary of the Communist Party of Moldova from 1950 to 1952 and future leader of the Soviet Union. Brezhnev was exceptionally impressed by Chernenko's skill in propaganda activities and by his organizational capabilities.

Brezhnev successfully brought the new republic under the control of the Communist Party. This impressed Joseph Stalin and in 1952 Brezhnev was invited to join the Central Committee (CC). Chernenko followed Brezhnev to fill a post in the CC's Agitation and Propaganda Department in Moscow in 1956. As in Moldova, he became fully engaged in both political and journalistic activity as the supervisor of the Agitator newspaper.

Under his initiative, new departments were created in the secretariat (for example, the Department for International Affairs), and bureaucracy was reorganized. Chernenko's unit was among the very first to be equipped with computers.

When Brezhnev became the General Secretary of the Communist Party of the Soviet Union CPSU after the deposition of Khrushchev in 1964, Chernenko's career continued successfully. In 1965 he was nominated Head of the General Department of the CC with the mandate to set the Politburo agenda and prepare the drafts of numerous CC decrees and resolutions. He had knowledge about all the top Party members and monitored telephone tapping and surveillance devices in offices.

Another important job was to sign hundreds of documents every day, which he did for 20 years. Even when he became General Secretary, he continued to sign papers referring to the General Department (when he was no longer physically able to sign documents, a facsimile was used instead).

In 1971, at the end of the 24th Party Congress, he was promoted a full member of the CC: he had control over the Party work and over the Letter Bureau, dealing with correspondence. In 1976 he was elected a secretary of this all-important body. From 1978 onwards he also served as a full member of the ruling Politburo and, de facto, was second only to the General Secretary in terms of Party hierarchy.

In the years preceding his election as General Secretary, Konstantin Chernenko fully immersed himself in ideological and party work; he headed Soviet delegations abroad, accompanied Brezhnev to important conferences (including the one that took place in Helsinki in 1976), and was in the commission that set up the new Constitution passed in 1977. He also participated in Communist Party congresses in Austria, France, Denmark and Greece and frequently met with foreign visitors and delegations. In 1979 Chernenko took part in the Vienna arms limitation talks.

According to some observers, Brezhnev apparently expected Chernenko to succeed him as General Secretary and groomed him for the post. However, Chernenko's political ascent was blocked by anti-Brezhnev forces, including the KGB and the military and after Brezhnev 's death in 1982 Chernenko was unable to rally a majority of the party factions behind his candidacy and lost out to Yury Andropov, the former KGB chief, who became General Secretary on November 12, 1982.

Known as a moderate and a compromiser, unwilling or unable to initiate sharp changes in Soviet policy or to offend various groups of Kremlin leaders, Chernenko seemed to accept Andropov's victory with good grace and political acumen, keeping a place for himself as party ideologist and chief theorist.

However, Andropov had become mortally ill by the following August, and after his death six months later, Chernenko succeeded him and on Feb. 13, 1984 became General Secretary of the CPSU, despite concerns over his own health.

It was Chernenko's health that became his true enemy. He was affected by serious lung disease. At Andropov's funeral, those present strained to catch the meaning of what Chernenko was trying to say in his eulogy. He spoke rapidly, swallowed words, kept coughing and stopped repeatedly to wipe his lips and forehead. He ascended Lenin's Mausoleum by way of a newly installed escalator and descended with the help of two bodyguards.

However, KGB pressure on Soviet dissidents also increased. Stalin was unofficially rehabilitated as a diplomat and a military leader, and there was a covert discussion of returning the name Stalingrad to the city whose name had been changed back to Volgograd during the anti-Stalinist wave of the 1950s. The one major personnel change Chernenko made was the firing of the Chief of the General Staff, Nikolay Ogarkov, who had advocated less spending on consumer goods in favor of greater expenditures on weapons research and development.

When Chernenko died on March 10, 1985 Soviet citizens received the news with little apparent distress. Many probably felt conditions in the Soviet Union could begin to improve under new, more vigorous leadership. 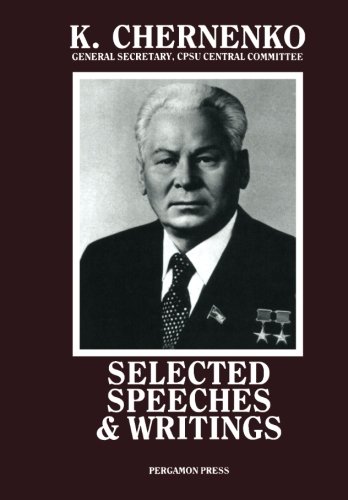 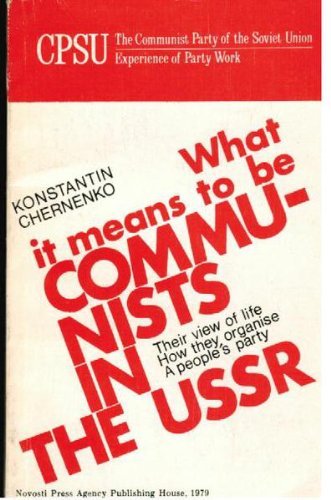 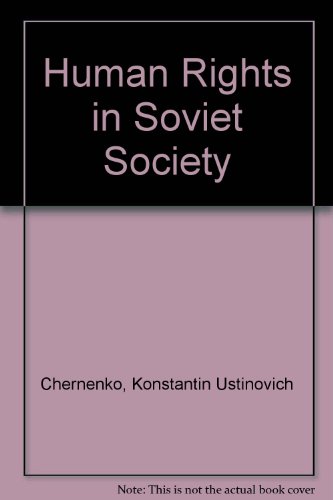 In foreign policy, Chernenko negotiated a trade pact with the People's Republic of China. Several times in his speeches or interviews he stated his desire to meet U. S. President Ronald Reagan to promote the international détente and world peace. Despite calls for renewed détente, little progress was made toward closing the rift in East-West relations during his rule.

The USSR, while under his administration, together with 14 Eastern Bloc countries, boycotted the 1984 Summer Olympics in Los Angeles, citing security concerns and stating that “chauvinistic sentiments and anti-Soviet hysteria were being whipped up in the United States. ” But many saw it as a mere act of revenge for the boycott of the 1980 Moscow Olympic Games.

In the late summer of 1984, the Soviet Union also prevented a visit to West Germany by East German leader Erich Honecker. War in Afghanistan also intensified, but in the late autumn of 1984 the United States and the Soviet Union did agree to resume arms control talks in early 1985.

"The Soviet Union has long been proposing to outlaw chemical weapons, to remove them from the arsenals of states. We are prepared for resolution of this problem either on a global basis or piece by piece. As one of the first steps the USSR and the other socialist countries proposed in January 1984 that agreement be reached on ridding Europe of all types of chemical weapons. "

"As a great socialist power the Soviet Union is fully aware of its responsibility to the peoples for preserving and strengthening peace. We are open to peaceful, mutually beneficial cooperation with states on all continents. We are for the peaceful settlement of all disputable international problems through serious, equal, and constructive talks. "

He was known as a moderate and a compromiser, unwilling or unable to initiate sharp changes in Soviet policy or to offend various groups of Kremlin leaders.

Chernenko started smoking at the age of nine, and he was always known to be a heavy smoker as an adult. Long before his election as general secretary, he had developed emphysema and right-sided heart failure.

Historian John Lewis Gaddis describes him as "an enfeebled geriatric so zombie-like as to be beyond assessing intelligence reports, alarming or not" when he succeeded Andropov in 1984.

Chernenko's personal life (as that of other Soviet leaders) was kept from public view. Many in both the USSR and the West saw his wife, Anna, and daughter, Yelena, for the first time at his funeral. He was married twice: from his first wife, whom he divorced, he had a son, who followed in his father’s footsteps and worked as a propagandist in Tomsk, Siberia.