Other photo of Mark Warren Smith

Other photo of Mark Warren Smith

The Official Handbook of the Vast Right Wing Conspiracy

Attorney and conservative commentator Mark Smith deconstructs the 10 biggest liberal myths, provides facts and proof to expose liberal lies and hypocrisy, and delivers hard evidence on why the liberals' standing policies on such issues as taxes, welfare, goverment spending, and defense are just plain wrong.

The Official Handbook of the Vast Right-Wing Conspiracy: The 2008 Presidential Election Edition

Already tired of the left-wing media spin on the 2008 elections? Had enough of Democratic talking heads hyping tax increases and the global warming scare? Looking for an island of straight-talking sanity in today's swamp of multi-cultiliberal gibberish? Look no further. Mark Smith continues his crusade against the lunatic Left with this new edition of The Official Handbook of the Vast Right-Wing Conspiracy. Right on time for the 2008 elections, this book shows you how to shoot down the latest liberal rants for bigger government, a cowardly foreign policy, and depraved social values. If you need a quick comeback to a liberal's demand to expand the nanny state, this is the place to find it. If you want handy arguments to challenge a leftist's denial of liberal media bias, you'll get them here. And if you must have the one book that drives liberals absolutely berserk, this is it. Why stay silent in the face of so many leftist lies? Grab a copy of The Handbook and you'll be ready to wade into a San Francisco cocktail party, a Grateful Dead reunion concert, or an Ivy League classroom and take on liberals on their home turf. More fun than Hillary's dysfunctional village and less expensive than John Edwards's haircuts, The Official Handbook of the Vast Right-Wing Conspiracy will get you riled up and ready for battle in the 2008 presidential election 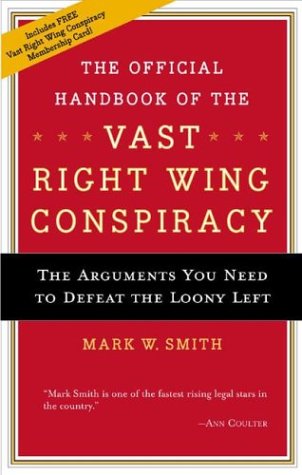 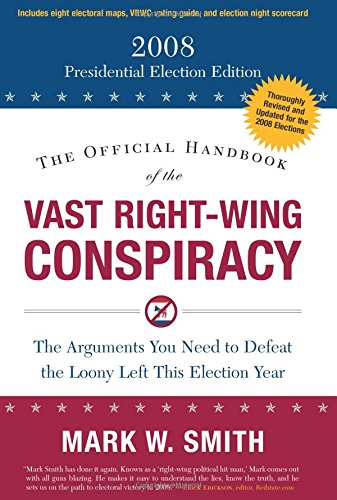