The Politics of Foreign Aid: U.S. Foreign Assistance and Aid to Israel

( United States aid to Israel averages a staggering $21 b...)

United States aid to Israel averages a staggering $21 billion per year. Yet, as this insightful volume explains, that aid has failed to serve both U.S. and Israeli interests. The Politics of Foreign Aid discusses how the appropriation of foreign aid is often controlled by lobbyists and U.S. domestic concerns rather than by Israeli needs. This clear and thorough examination begins with a description of the objectives, major programs, and historical background of U.S. aid to Israel--military aid, economic aid, and private grants and subsidies. The final section analyzes the effect that foregin aid has had on Israel and predicts the role that aid will play in Israel's future. Finally, Rabie provides suggestions about how to change the role of lobbyists in influencing foreign policy.

Rabie, Mohamed was born on June 5, 1940 in Yazour, Palestine. Son of Abdulaziz Mohamed Rabie and Sabha (Abdullatif) Bayrum. came to the United States, 1976.

Member board Fund for Technology Assistance for African Countries, Cairo, 1975-1977. Member of advisory board International Institute for Ethnic Group Rights, Munich, since 1989, Search for Common Ground, Washington, since 1991. 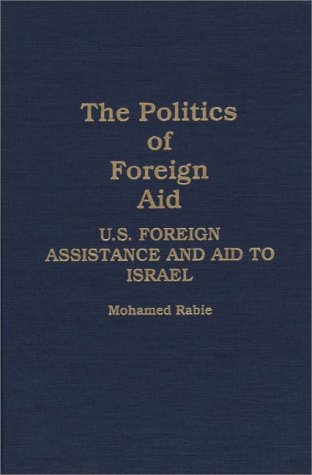