Other photo of Nelly Furtado

Other photo of Nelly Furtado

Nelly Kim Furtado is a Canadian singer, songwriter and actress. She has sold 20 million albums worldwide and more than 20 million singles, bringing her total sales to over 40 million records around the world.

Ethnicity: Her Portuguese parents were emigrants from the Azores, both from São Miguel Island.

Furtado was born on December 2, 1978, in Victoria, British Columbia, Canada. Her Portuguese parents, Maria Manuela and António José Furtado, were emigrants from the Azores, both from São Miguel Island. They emigrated to Canada in the late 1960s.Nelly was named for Soviet gymnast Nellie Kim. Her siblings are Michael Anthony and Lisa Anne. They were raised Roman Catholic. At age four, she began performing and singing in Portuguese. Furtado's first public performance was when she sang a duet with her mother at a church on Portugal Day.

She began playing musical instruments at the age of nine, learning the trombone, ukulele and – in later years – the guitar and keyboards. At the age of 12, she began writing songs, and as a teenager, she performed in a Portuguese marching band. Furtado has acknowledged her family as the source of her strong work ethic; she spent eight summers working as a chambermaid with her mother, along with her brother and sister, who was a housekeeper in Victoria. She has stated that coming from a working-class background has shaped her identity in a positive way.

During a visit with her sister Lisa Anne in Toronto, the summer after grade eleven, Furtado met Tallis Newkirk, member of the hip hop group Plains of Fascination. She contributed vocals to their 1996 album, Join the Ranks, on the track "Waitin' 4 The Streets." After graduating from Mount Douglas Secondary School in 1996, she moved to Toronto to reside with her sister Lisa Anne. The following year, she formed Nelstar, a trip hop duo with Newkirk. Ultimately, Furtado felt the trip-hop style of the duo was "too segregated," and believed it did not represent her personality or allow her to showcase her vocal ability. She left the group and planned to move back home.

In 1997, she performed at the Honey Jam talent show. Her performance attracted the attention of The Philosopher Kings singer Gerald Eaton, who then approached her to write with him. He and fellow Kings member Brian West helped Furtado produce a demo. She left Toronto, but returned again to record more material with Eaton and West. The material recorded during these sessions which were shopped to record companies by her attorney Chris Taylor and led to her 1999 record deal with DreamWorks Records, signed by A&R executive Beth Halper, partner of Garbage drummer and record producer Butch Vig. Furtado's first single, "Party's Just Begun (Again)", was released that year on the Brokedown Palace: Music from the Original Motion Picture Soundtrack.

Furtado continued the collaboration with Eaton and West, who co-produced her debut album, Whoa, Nelly!, which was released in October 2000. The album was an international success, supported by three international singles: "I'm like a Bird", "Turn off the Light", and "...On the Radio (Remember the Days)". It received four Grammy nominations in 2002, and her debut single won for Best Female Pop Vocal Performance. Furtado's work was also critically acclaimed for her innovative mixture of various genres and sounds. According to Maclean's magazine, Whoa, Nelly! had sold six million copies worldwide as of August 2006.

Furtado's second album, Folklore, was released in November 2003. The final track on the album, "Childhood Dreams", was dedicated to her daughter, Nevis. The album includes the single "Força" (meaning "strength"/ "power" or "you can do it!" in Portuguese), the official anthem of the 2004 European Football Championship. Furtado performed this song in Lisbon at the championship's final, in which the Portugal national team played. The lead single is "Powerless (Say What You Want)" and the second single is the ballad "Try". The album was not as successful as her debut, partly due to the album's less "poppy" sound, as well as underpromotion from her label DreamWorks Records. DreamWorks had just been sold to Universal Music Group. In 2005, DreamWorks Records, along with many of its artists including Furtado, was absorbed into Geffen Records.

Furtado's third album, named Loose, after the spontaneous, creative decisions she made while creating the album, was released in June 2006. In this album, primarily produced by Timbaland, Furtado experiments with sounds from R&B, hip hop, and 1980s music. Furtado herself describes the album's sound as punk-hop, described as "modern, poppy, spooky" and as having "a mysterious, after-midnight vibe... extremely visceral". She attributed the youthful sound of the album to the presence of her two-year-old daughter. The album received generally positive reviews from critics, with some citing the "revitalising" effect of Timbaland on Furtado's music, and others calling it "slick, smart and surprising" . Loose has become the most successful album of Furtado's career so far, as it reached number one, not only in Canada and the United States, but also several countries worldwide. The album produced her first number-one hit in the United States, "Promiscuous", as well as her first number-one hit in the United Kingdom, "Maneater". The single "Say It Right" eventually became Furtado's most successful song worldwide, due to its huge success in Europe and in the United States, where it became her second number-one hit. "All Good Things (Come to an End)" became her most successful song in Europe, topping single charts in numerous countries there.

On February 16, 2007, Furtado embarked on the "Get Loose Tour". She returned in March 2007 to her hometown of Victoria to perform a concert at the Save-On Foods Memorial Centre. In honour of her visit, local leaders officially proclaimed March 21, 2007, the first day of spring, as Nelly Furtado Day. After the tour, she released her first live DVD/CD named Loose the Concert. On April 1, 2007, Furtado was a performer and host of the 2007 Juno Awards in Saskatoon, Saskatchewan. She won all five awards for which she was nominated, including Album of the Year and Single of the Year. She also appeared on stage at the Concert for Diana at Wembley Stadium in London on July 1, 2007, where she performed "Say It Right", "Maneater", and "I'm like a Bird". In 2007, Furtado and Justin Timberlake were featured on Timbaland's single "Give It to Me",which became her third number-one single in the U.S. and second in the UK. In late 2008, Furtado collaborated with James Morrison on a song called "Broken Strings" for his album Songs for You, Truths for Me. The single was released on December 8 and peaked at No.2 on the UK Singles Chart in early January. In 2008, she sang with the Italian group "Zero Assoluto" the ballad Win or Lose – Appena prima di partire, released in Italy, France and Germany and whose video was shot in Barcelona. Furtado made a guest appearance on Flo Rida's new album, R.O.O.T.S.. Furtado also made a guest appearance on Divine Brown's Love Chronicles, co-writing and singing on the background of the song "Sunglasses". Furtado married Cuban sound engineer Demacio "Demo" Castellón, with whom she had worked on the Loose album, on July 19, 2008.

Furtado's debut Spanish album, Mi Plan was released with the first single, "Manos Al Aire" ("Hands in the Air"). She had formed her own record label, Nelstar, in conjunction with Canadian independent label group Last Gang Labels. The first act signed to Nelstar is Fritz Helder & the Phantoms. "Manos al Aire" was released on the new label. The second, third and fourth singles were "Más", "Mi Plan" and "Bajo Otra Luz" respectively. Furtado won the Latin Grammy Award for Best Female Pop Vocal Album for Mi Plan. She is the first Canadian to win a Latin Grammy award. Furtado also recorded "Manos al Aire" in Simlish for the new Sims 3 expansion, World Adventures. Lifestyle, her planned fourth English studio album, was not released during the summer of 2010 in favor a second leg of her Mi Plan Tour.

Furtado came under fire after 2011 reports from the New York Times and a WikiLeaks document revealed she had accepted payment of one million dollars to perform for the family of Libyan ruler Muammar Gaddafi. Only after the story broke did she promise to donate to charity the $1 million she received for a 2007 concert, which ended up going to Free the Children.

Furtado publicly endorsed Green Party leader Elizabeth May in Saanich-Gulf Islands during the federal election in 2011. Furtado was featured on one of the Game's The R.E.D. Album tracks, titled "Mamma Knows" (produced by The Neptunes). For the Canadian film The Year Dolly Parton Was My Mom, Furtado lent her vocals for the Dolly Parton gospel cover "The Seeker" featured during the credits of the film. Furtado collaborated with recording artist Alex Cuba and K'naan once again. The duet with K'naan "Is Anybody Out There", was released as the first single from his extended play More Beautiful than Silence.

The Spirit Indestructible was released in September 2012. Furtado previously proclaimed that the album was most like her 2000 debut Whoa, Nelly!, but containing elements from urban, alternative, and reggae. The influences for the album range from Janelle Monae, The xx, to Florence + the Machine. The album has attracted producers such as The Neptunes, Tiësto, Timbaland, Rick Nowels, Ryan Tedder and Rodney Jerkins.The first single from The Spirit Indestructible, "Big Hoops (Bigger the Better)", was released digitally on April 17, 2012 and was sent to North American radio stations on May 1, 2012. Furtado continued to collaborate with hip-hop producer Salaam Remi, who previously worked on the 2010 single "Night Is Young", on "The Edge". The lyrics for the Salaam Remi produced track are reported to be influenced by the Tiger Woods cheating scandal, in which was originally referred to as "Elin's Song". On July 2, 2011 Furtado performed a new track, the acoustic ballad "Mystery", from her upcoming studio album. Furtado intends on promoting the album for at least two years while embarking on a tour. Furtado has simultaneously begun work on a follow-up to her Spanish effort, Mi Plan, and her fifth English-language studio album. The fifth album will fulfill her contract with Interscope. 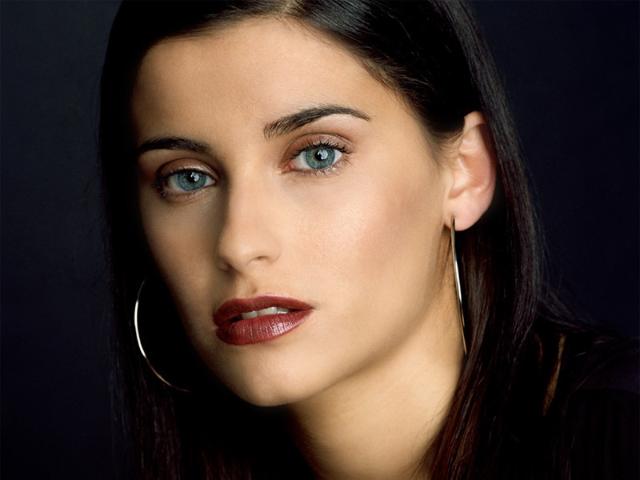