In 1778, Oliver graduated from Yale College.

In 1778, Oliver began the study of law under Tapping Reeve at the Litchfield Law School.

Bureau of Engraving and Printing portrait of Wolcott as Secretary of the Treasury.

In 1778, Oliver graduated from Yale College.

Bureau of Engraving and Printing portrait of Wolcott as Secretary of the Treasury.

In 1778, Oliver began the study of law under Tapping Reeve at the Litchfield Law School.

After being tutored by his mother, Oliver entered a grammar school to prepare for Yale College. Immediately after his graduation in 1778 from the college, he commenced the study of law under Tapping Reeve at the Litchfield Law School. 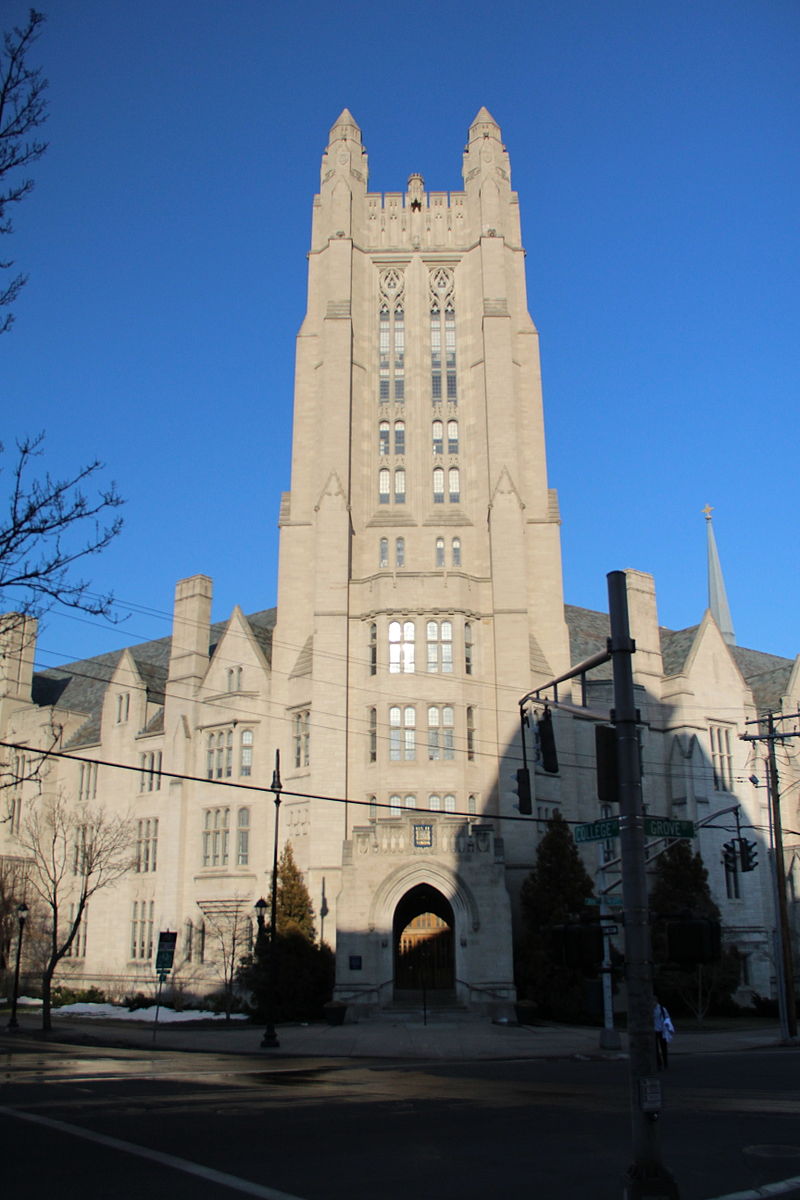 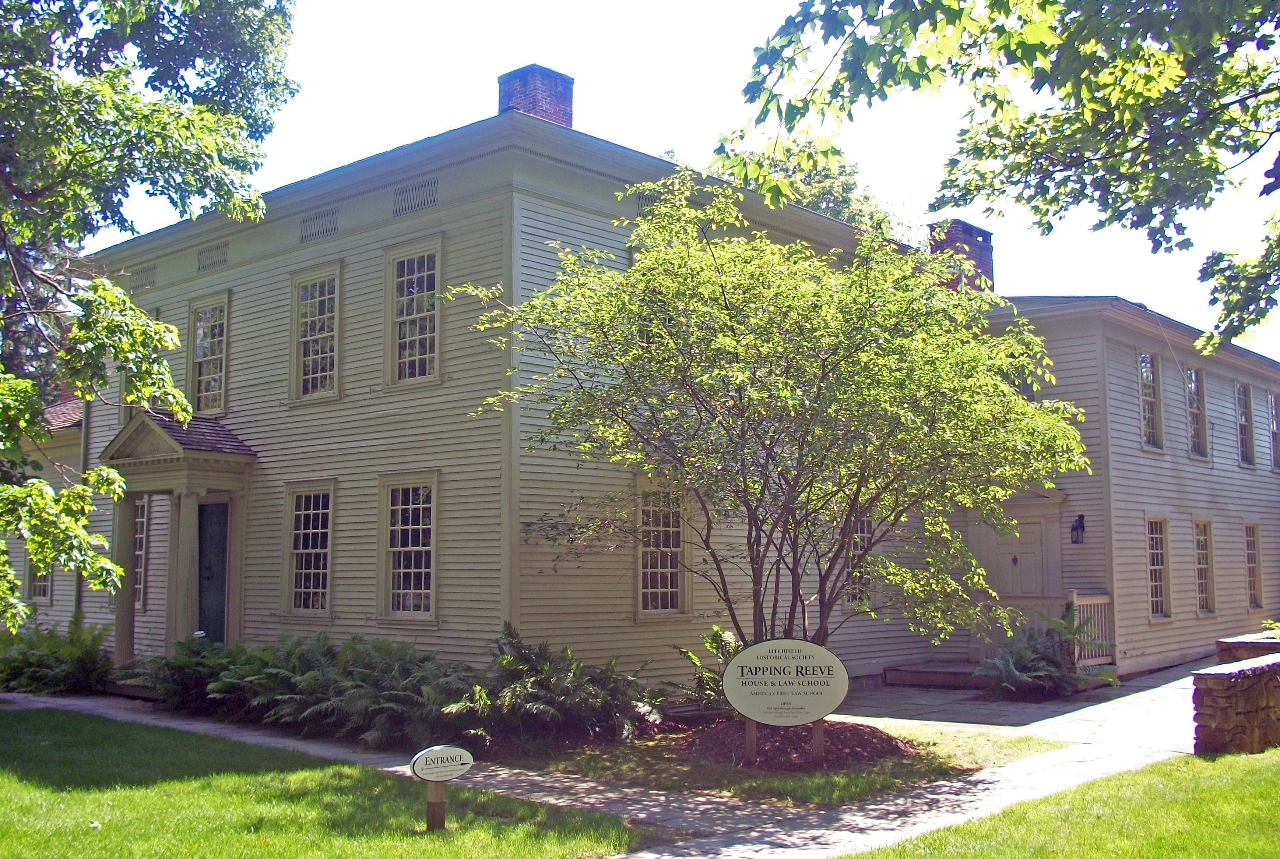 Oliver's participation in the military events of the Revolution was limited to volunteer service in the Continental Army during two minor campaigns from 1777 to 1779. Declining a commission as ensign, he accepted an appointment in the quartermaster's department and supervised the safekeeping and conveyance of army stores and ordnance in Litchfield.

When Wolcott came of age, he was at once admitted to the bar, and shortly thereafter removed to Hartford, where diligence as a clerk in the office of the Connecticut Committee on Pay-Table, from 1781 till 1782, coupled perhaps with his family's influence, led to his appointment in January 1782 to the committee itself. He remained a member of the committee until 1784.

In May 1784, Oliver was appointed a commissioner, in concert with Oliver Ellsworth, to adjust and settle the accounts and claims of Connecticut against the United States. He held the post till 1788. In May 1788, Oliver was selected to fill the new office of the comptroller of Public Accounts for Connecticut and reorganized the financial affairs of the state in a manner, which met with the approval of the Assembly. During this period of his career, he acquired self-confidence and formed practical habits of intense and persevering application to business, which served him well in later life. Wolcott remained in the position of comptroller until 1789.

In September 1789, with the strong support of the Connecticut delegation, Wolcott was appointed auditor for the United States Department of the Treasury, assuming his post early in November and holding it till 1791. Secretary Hamilton left most of the routine elaboration of departmental forms and methods to his subordinates, and Wolcott was incessantly and laboriously employed. His "rare merit" and distinguished conduct induced President Washington, upon Hamilton's recommendation, to appoint him comptroller for the United States Department of the Treasury in June 1791, the post he held till 1795.

When the Bank of the United States was organized in the autumn of 1791, Oliver was instrumental in devising a plan for the establishment of branches, which the stockholders adopted. It would appear, that the presidency of the bank was offered to him, but was declined. Wolcott served quietly and efficiently as comptroller.

Oliver never wavered in his loyalty to Hamilton, and their close official contact was supplemented by a lasting private friendship. When Hamilton resigned, Wolcott, on February 2, 1795, was appointed by President Washington to succeed him.

Though Oliver brought little political strength to the cabinet, he impressed Washington with his ability and integrity and won the President's unfeigned esteem and affection. On larger questions of fiscal policy, he constantly sought and received Hamilton's advice. The mounting expenditures of the federal government, the extreme fluctuations and wild speculations in American foreign commerce and the increasing demoralization of the European money-markets, especially that of Amsterdam, created grave problems for the Treasury. To add to Wolcott's difficulties the Republican majority in the House of Representatives during the Fourth Congress (1795-1797), under the leadership of Albert Gallatin, sought to wrest the initiative in financial matters from the department. Congressional disinclination to levy adequate additional taxes or to confer satisfactory borrowing power obliged Wolcott and the other commissioners of the sinking fund in 1796-1797 to sell a considerable portion of the government's stock in the Bank of the United States in order to reimburse some of the overdue temporary loans, by which that institution had crippled itself.

Under Gallatin's relentless pressure, the House of Representatives veered steadily in the direction of specific, rather than blanket appropriations, thereby curtailing the quasi-independence in apportioning governmental funds, which Hamilton had so cavalierly employed. Pressure upon the Treasury was eased, when the French crisis induced Congress to impose direct taxes along lines, mapped out by Wolcott, and in 1798, a five million dollar loan at eight percent interest was floated.

In the meantime, Wolcott was becoming involved in a labyrinth of political intrigue, which left a lasting shadow upon his reputation. Throughout the years 1797-1800, Wolcott enjoyed the confidence of President John Adams, but his deeper loyalty, not to say subservience, to Alexander Hamilton, led him to cooperate with Pickering and McHenry in promoting Hamilton's wishes, rather than those of the chief executive. When Adams finally reconstructed his cabinet, in 1800, Wolcott escaped the purge. Adams liked and trusted him. Wolcott, however, most reprehensibly collaborated in the preparation of Hamilton's indiscreet circular letter, attacking the political character of the President. When the Hamiltonian effort to elect Thomas Pinckney over the head of Adams collapsed, Wolcott finally proffered his resignation from the post of the 2nd United States Secretary of the Treasury, which began on December 31, 1800. Adams accepted it with "reluctance and regret".

Upon Wolcott's invitation, the House of Representatives appointed a committee to investigate the treasury department, which reported, on January 28, 1801, that "the financial concerns of the country have been left by the late Secretary in a state of good order and prosperity". Republican newspapers, however, were raising a storm of malicious criticism, regarding his alleged countenancing of defalcations in the public accounts and his alleged incendiary responsibility for fires in the war office on November 8, 1800, and the treasury building on January 20, 1801.

When Wolcott left Washington early in February 1801, his whole property consisted of a small farm in Connecticut and a few hundred dollars in cash. Quite unexpectedly, President Adams, on February 18, 1801, appointed him Judge of the United States Circuit Court for the Second Circuit. He was confirmed by the United States Senate on February 20, 1801, and received his commission the same day. His service terminated on July 1, 1802, due to abolition of the court. Simultaneously with this blow, Oliver suffered the indignity of having the rectitude and efficiency of his late treasury administration impugned by a House сommittee report on April 29, 1802. To these charges, he replied convincingly in a strong pamphlet, entitled "An Address to the People of the United States" (1802).

Burdened with the support of a family, "satiated" with public employment, unwilling to confine himself to a small farm in Litchfield, Wolcott was urged by Hamilton to remove to New York and establish himself in business. Through Hamilton's intervention, he entered, on February 3, 1803, into an extremely liberal agreement with James Watson, Moses Rogers, Archibald Gracie and William Woolsey of New York City for the formation of a commission and agency firm to be known as Oliver Wolcott & Company. His four partners each advanced $15,000 capital, Wolcott none at all, but he was to be the managing partner at a salary of $3,000 a year and one-fifth of the profits. In 1804, the company made its first venture in the China trade and after the partnership was amicably dissolved at Wolcott's suggestion in April 1805, he concentrated his main energies in that field.

In 1810-1811, Oliver was elected to the main board of directors of the Bank of the United States and after the charter lapsed on March 4, 1811, he played a prominent role in the launching of the Bank of America, chartered by the New York legislature in 1812, serving as president until he was ousted in April 1814 by a "secret cabal" for political reasons. This event proved to be a turning point in his career.

Winding up his business in New York during the summer of 1815, Wolcott returned to Litchfield, Connecticut, and set himself up as a gentleman farmer. For several years, he assisted in promoting manufacturing enterprises in his home state.

When a coalition of opposition elements in Connecticut formed the Toleration Party, on February 21, 1816, Oliver was chosen as a candidate for governor in competition with the Federalist incumbent, John Cotton Smith. Defeated in April 1816, he was elected by a narrow margin in 1817 and the political revolution in the state got underway.

As governor, Wolcott pursued a tactful policy of moderation, cooperation and compromise. Charged with political apostasy, he nevertheless proved "an ideal man to work out the state's transition". After Federalist control of the aristocratic council was finally overthrown and Wolcott was re-elected virtually without opposition in April 1818, a constitutional convention was held from August 26 to September 16, 1818, over which he presided.

The new constitution, for which he was influential in drafting separated church and state, guaranteed complete freedom of conscience, separated the powers of government and established a somewhat more influential executive and an independent judiciary. Proving himself both able and popular, Wolcott was re-elected governor year after year. His social and economic views were, nevertheless, too progressive for the period. His expert views on taxation were reflected in comprehensive and constructive readjustments in 1819, but his efforts to promote state aid for agriculture and industry, to maintain an efficient public-school system, to secure a mechanics' lien law, to foster internal improvements and to regulate the banking system more rigidly came to naught. Finally, the aging executive was eliminated from the ticket by the Republican caucus in 1826 and though he ran as an independent in the election of April 1827, he was defeated by a small margin by the machine candidate, Gideon Tomlinson, and left office on May 5, 1827. This final repudiation of Wolcott by the state he had served so well was doubtless influential in his subsequent removal to New York City, where he remained until his death. 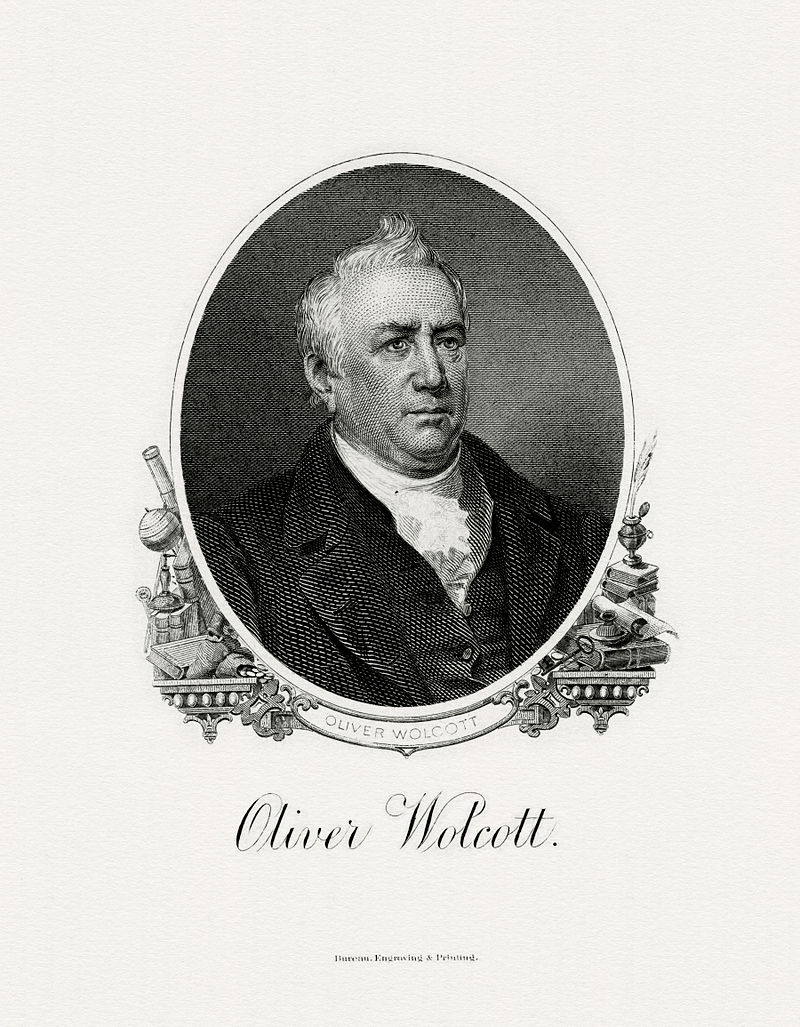 Although Wolcott was a firm Federalist, bitterly resentful of "perfidious Virginians", when he first moved to New York, his political principles underwent a steady modification, leading some of his erstwhile friends to suspect his sanity. During the closing years of the War of 1812, he became a "War Federalist," and his outspoken defense of the war during the critical year of 1814 attracted the favorable attention of Connecticut Republicans, who had so long and so unsuccessfully striven to subvert the Federalist oligarchy, which ruled "the land of steady habits".