Peretz Hirshbein and the cast of characters of "Green Fields"

Perets Hirshbeyn and his wife, the poet Esther Shumiatsher, on a visit to Johannesburg, South Africa

Peretz Hirshbein and the cast of characters of "Green Fields"

The Haunted Inn: A Drama in Four Acts (Classic Reprint)

Peretz Hirschbein was a Yiddish playwright, novelist, journalist, travel writer, and theater director, known as "the Yiddish Maeterlinck", because of his focus more on mood than plot. His work as a playwright contributed greatly to the second golden age of Yiddish theater shortly after the end of World War I.

Peretz was born on November 7, 1880 in a water mill in the village of Melnik, near the shtetl Kleszczele, Grodno Governorate, Polish Lithuania. His parents were millers.

Until age fourteen, Hirschbein learned in a cheder and by tutors in Kleszczele and Brisk, before going to his mother’s shtetl, Milejczyce (Poland), to continue learning. It was in Milejczyce that Hirschbein first came into contact with secular Yiddish literature among the wares of a wandering bookseller, including works by Shomer (Nahum Meyer Shaikewitz), Ozer Blaustein, I.M. Dik, Yehoshua Mazakh, and songs by Eliakum Zunser, which introduced him to a world outside the shtetl. Hirschbein began to travel from shtetl to shtetl, ultimately coming to Orla, where he met and befriended Isaac Pribulski, a prodigy and son of the deceased Orla Rabbi, who had already published some poems in Yiddish. Through Pribulski, Hirschbein learned about Hebrew literature and began to write poems in Hebrew. Hirschbein also traveled to Brisk, to Kuznica, where he taught Russian, to Grodno and then Vilna (Vilnius) in 1900, where he studied the Bible, Hebrew grammar and Jewish history with a circle of yeshiva students, while secretly reading Yiddish books. Although he learned in poverty, he brought together yeshiva boys into an association "Torah mtsion" and learned Hebrew and Jewish history with them in the shoemakers' kloyz. He participated in the soon-to-emerge "Poale Zion" party. He also had (until 1903) learned with the workers' kloyzekh.

Hirshbeyn began giving Hebrew lessons in Vilnius in order to support himself while he was writing and publishing Hebrew poetry and Yiddish stories. His first published poem, “Gagu'im” (Longings), appeared in 1901 in David Frishman’s weekly journal Ha-Dor (The Generation), which gave him some measure of fame among the Jewish youth of Vilna. In 1902, his poem, “Be-Kitzur” (In Short), was published in the second part of the anthology of Ha-Melits (The Advocate).

Hirschbein went to Warsaw in 1904, where he was taken under the wing of I.L. Peretz, who in turn introduced him to Hebrew poet H.N. Bialik. He also became close friends with Hebrew novelist Isaiah Bershadsky. He began writing naturalist drama, including Miriam (1905), based upon a particularly vivid experience with a Jewish prostitute, which he wrote in Hebrew and then translated into Yiddish. He later revised the play in Yiddish under the title Barg Arop (Downhill) for a Yiddish theater in Buenos Aires. Hirschbein continued to write naturalistic dramas in Hebrew, including Shevarim (Pieces, 1903), Holhim ve-Havim (Slowly Extinguishing), Olamot Bodedim (Lonely Worlds), later translated into Yiddish as Eynzame Veltn (Lonely Worlds), was published in 1906 and was one of his last Hebrew plays before he began to focus more on writing in Yiddish. His early Yiddish symbolist dramas include the one-act Kvorim-Blumen (Grave Blossoms, 1906), Demerung (Twilight, 1906). A collection of poems and prose was published as Vanderer-Troymen (Dreams of a Wanderer, 1908).

Hirschbein moved to Odessa in 1908, where he began to take a more active role in staging his own plays. Also in 1908, he wrote Yoyel (Joel), Dovid Herman produced Der Tkies-Kaf in Lodz, and Oyf Yener Zayt Taykh (On the Other Side of the River, 1906), his first play originally written in Yiddish, was produced in Russian in Odessa by the Russian director Konstantin Mardzhanov. In autumn of 1908, Hirschbein, encouraged by Bialik, B. Shapir and by students from an acting conservatory in Odessa, as well as by Dovid Herman, founded the theater company that became known as the Hirschbein Troupe. This was the first Yiddish company to devote itself to artistic theater and to try to raise the level of Yiddish theater in general. The troupe was made up of amateurs, students from the Russian Dramatic School, including Leah Noemi (Kugel) and Sonia Orlovska, and professional actors such as Jacob Ben-Ami, Lazar Freed, Wolf Zilberberg, and Miriam Orleska. Hirschbein, Ben-Ami, Zilberberg, and Dovid Herman directed, B. Shapir acted as prompter, Ephriam Yakubson was the manager and Benjamin Shvartzer was the assistant director. The first play the troupe put on was Hirschbein’s Shadkhonim (Matchmakers).

In the summer of 1909, the Hirschbein Troupe toured Southern Russia, Belarus and Lithuania, returning to Odessa that winter. They were praised by the Russian press which referred to them as the Yiddish Art Theater and were greeted with enthusiasm by their audiences. In February 1910, they were invited for 10 performances in Warsaw by Perets Brash and the Warsaw Literary Society but the audience reaction was quite mixed. With the help of I.L. Peretz, the group attempted to perform Peretz’s drama Di Goldene Keyt (The Golden Chain), but abandoned the project to tour Minsk, Vilna and other cities. The company’s escalating financial troubles during the tour helped to convince Hirschbein that he wanted to leave the troupe and return to his writing. The troupe lasted for a short while without Hirschbein, who then returned, and even acted briefly, but the Hirschbein Troupe officially disbanded July 10, 1910 in Dvinsk. Although in existence for only two years, the Hirschbein Troupe began a new chapter in the history of Yiddish theater. It was the first professional artistic Yiddish company, focusing more on the literature of the plays rather than the physical presentation, and it laid the foundation for the Yiddish Art Theaters to come, including the Vilna Troupe, the Yiddish Art Theater of Maurice Schwartz and the People’s Theater of Jacob Ben-Ami.

After the Hirschbein Troupe disbanded, Hirschbein went back to writing, including a three-act drama Baym Breg (On the Edge, 1910) and a series of translations of Duke Nekhlyudov’s Journal based upon Tolstoy’s Resurrection (1910, published 1912). He also resumed his traveling, visiting Ekaterinoslav (Dnipropetrovsk), Kiev, where he met with many Yiddish writers, Odessa, Warsaw, Vienna, Paris, London, Liverpool, and then on to New York, where he arrived for the first time in November 1911. He wrote some of his best plays at this time, including A Farvorfn Vinkl (A Secluded Corner, 1912) and Di Puste Kretshme (The Haunted Inn, 1913), which was quite successfully staged by the Progressive Dramatic Club in 1913. Arthur Hopkins staged an English translation of Di Puste Kretshme on Broadway in 1922 in which Ben-Ami starred, and there were also versions on the Yiddish stage in Europe and the United States. In these plays, as well as in others, Hirschbein abandoned symbolism and returned to the rural world of shtetl Jews. The understated quality of these works appealed to directors such as Maurice Schwartz and Jacob Ben-Ami and became regular productions in the repertoire of artistically ambitious Yiddish theaters.

Hirschbein went to a farm in the Catskills during the summer of 1912, where he wrote Dos Kind fun di Velt (The Child of the World), a symbolist drama, as well as trying his hand at farming, before returning to New York City and then, in 1913, back to Europe. He traveled to Argentina in 1914 to take part in a Jewish agricultural colony. On his trip from Argentina to New York, he was caught in the outbreak of World War I when his ship was sunk by a German warship and he was taken captive for ten days. After he was released, Hirschbein returned to New York, where he wrote for Der Tog (The Day), where much of his work was published, and created a majority of his works, including his travel journal from South America, later published as Fun Vayte Lender (From Far Lands, 1914), and his more realistic and folksy dramas. Maurice Schwartz’s staging of A Farvorfn Vinkel and Dem Shmids Tekhter at his Irving Place Theater in 1918 was the beginning of Yiddish art theater in America and helped to revive Schwartz’s flagging career, as well as to usher in the second golden age of Yiddish theater. The Vilna Troupe, founded in 1916 by some of the same actors who had been in the Hirschbein Troupe, regularly performed Hirschbein’s plays. His 38 Yiddish dramas were also performed in Russian, Hebrew, English, German, Spanish, and French by theater troupes all over the world.

In 1918, while giving a lecture in Calgary, Alberta, Hirschbein met Esther Shumiatcher, a Yiddish poet, and they were subsequently married. In 1920, the two set off for a two-year trip to Australia, New Zealand, Tahiti, and South Africa. In addition to his travel writing, Hirschbein also continued to write plays, such as A Kholem fun der Tsayt (A Dream of Time, 1919). In 1923, Hirschbein, H. Leivick, David Pinski, and Mendl Elkin founded the Yiddish Theater Society in the Bronx. This organization founded undzer Teater (Our Theater) in 1925, which Hirschbein co-directed in Ansky’s Tog un Nakht (Day and Night), the opening show. The Yiddish Theater Society also published the monthly theater journal Tealit and set up a theater studio whose teachers included Alexander Mukdoni, Shmuel Niger, Jacob Shatzky, and the Russian actor Richard Boleslavsky. While well-received, the Yiddish Theater Society, Tealit, undzer Teater, and the studio all closed by 1926.

Hirschbein and his wife continued to travel a great deal, setting off for their second extended trip in 1925, and spending five years traveling around the world to South America, Japan, China, India, Israel, the Soviet Union, and various countries in Europe. Hirschbein once again produced a great deal of travel writings about his trip, including Israel and India, and a book about Soviet Jewish colonization in southern Russia, Schvartzbrukh(Schwarzbruch is a forest in Germany). The couple returned to America in November 1929, where Hirschbein began to focus more on writing his memoirs, Mayne Kinder Yorn (My Childhood, 1932), etc. He also continued to write articles for Der Tog (The Day). Hirschbein’s last dramatic plays were published in the late 1920’s.

Hirschbein’s son, Omus (Amos), was born October 3, 1934 in New York, where the Hirschbeins lived until 1940, at which point they traveled across the United States and Canada before settling in Los Angeles. A movie of Grine Felder came out in October 1937 and was hugely successful. In September 1941, Hirschbein’s 60th birthday was celebrated in Los Angeles at the Wilshire Ebell Theater. Hirschbein also wrote the screenplay for the 1943 English-language film, Hitler's Madman (here called “The Hangman”), which was the American debut of director Douglas Sirk. Oyf Fremde Vegn(On Foreign Roads), a novel of Jewish life in America, was published serially in Der Tog (The Day) from November 23, 1947-September 26, 1948. Hirschbein was quite ill for the last three years of his life with amyotrophic lateral sclerosis (Lou Gehrig’s Disease), from which he died August 16, 1948 in Los Angeles. 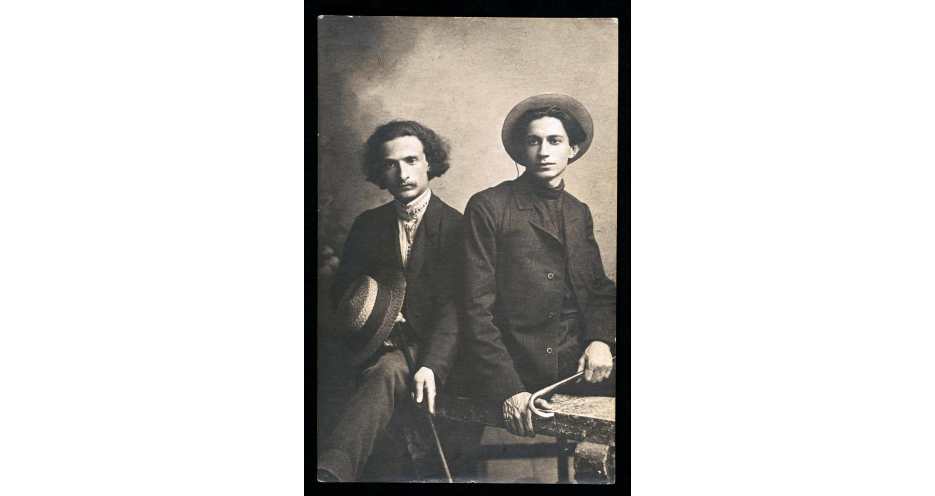 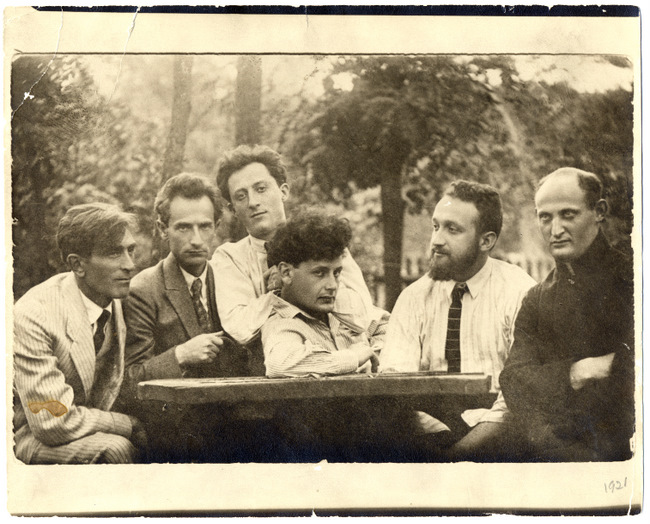 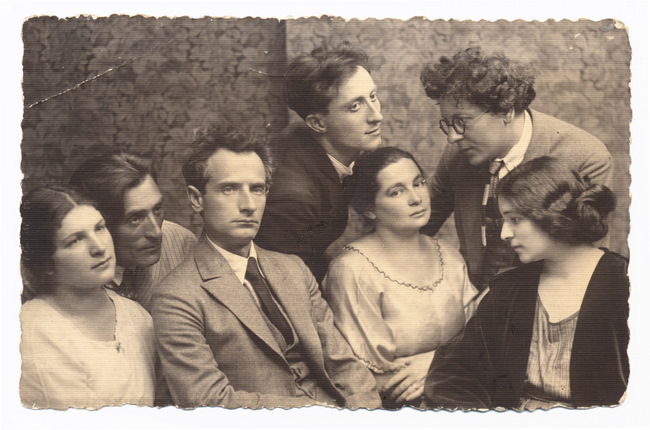 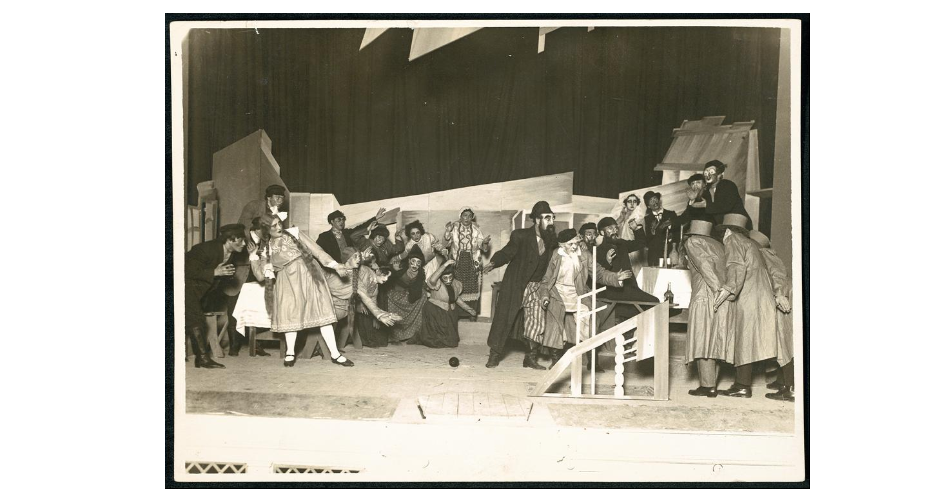 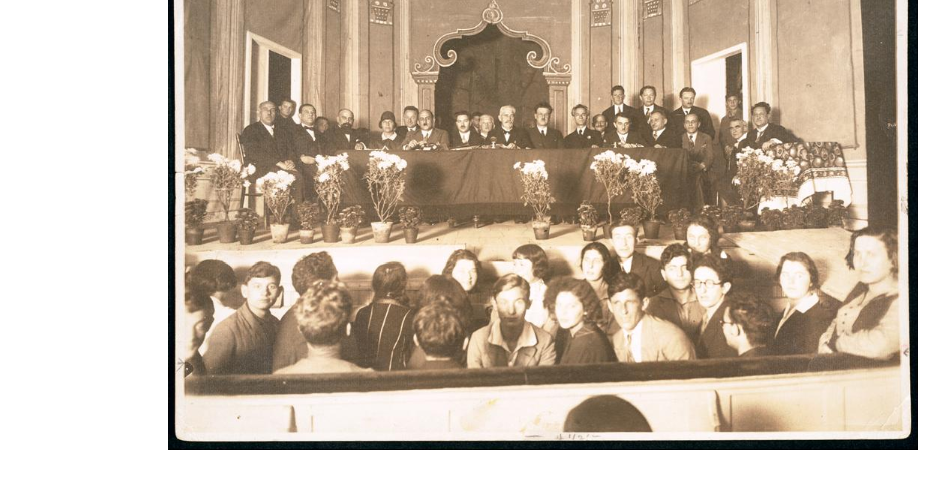 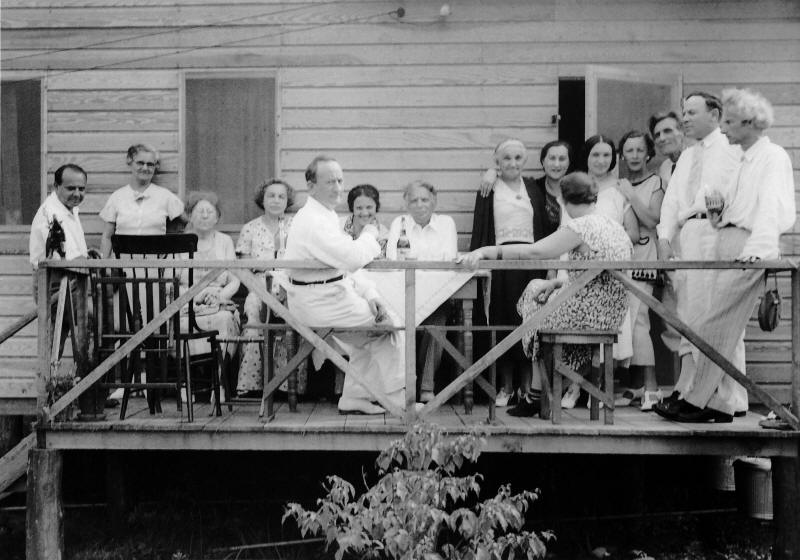 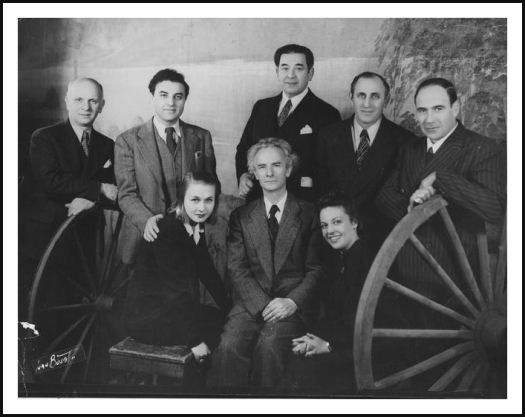 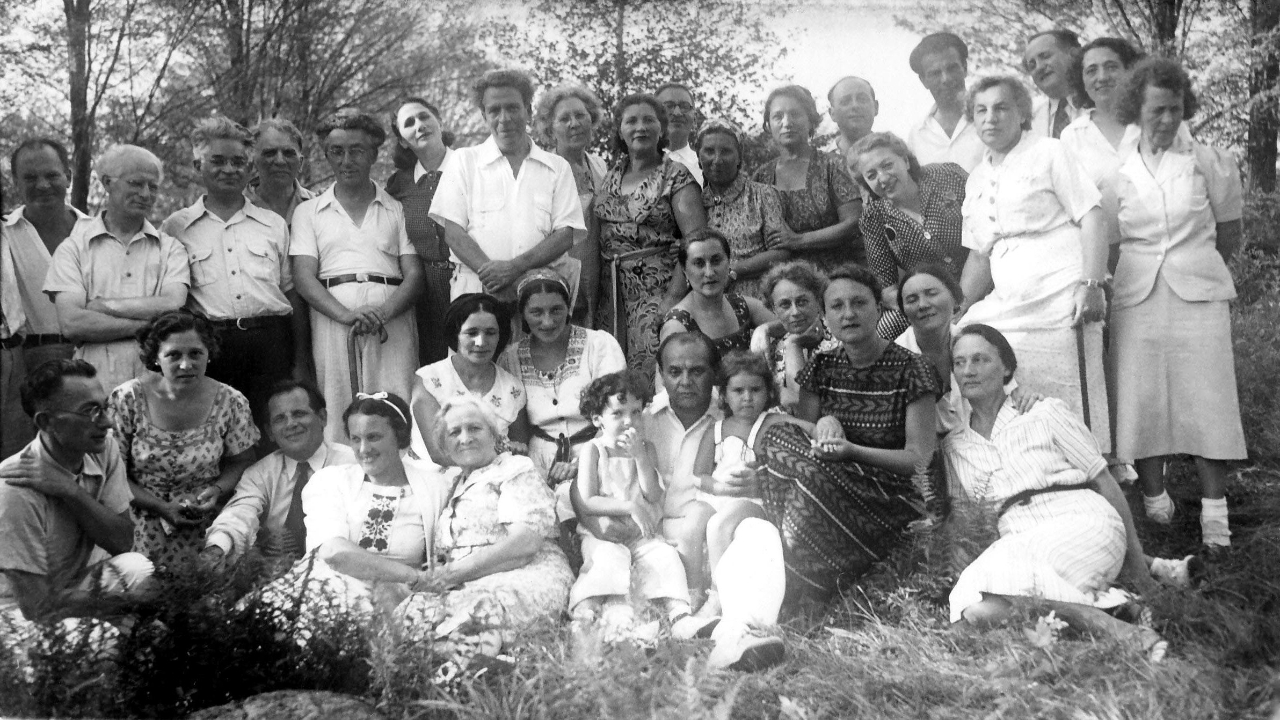 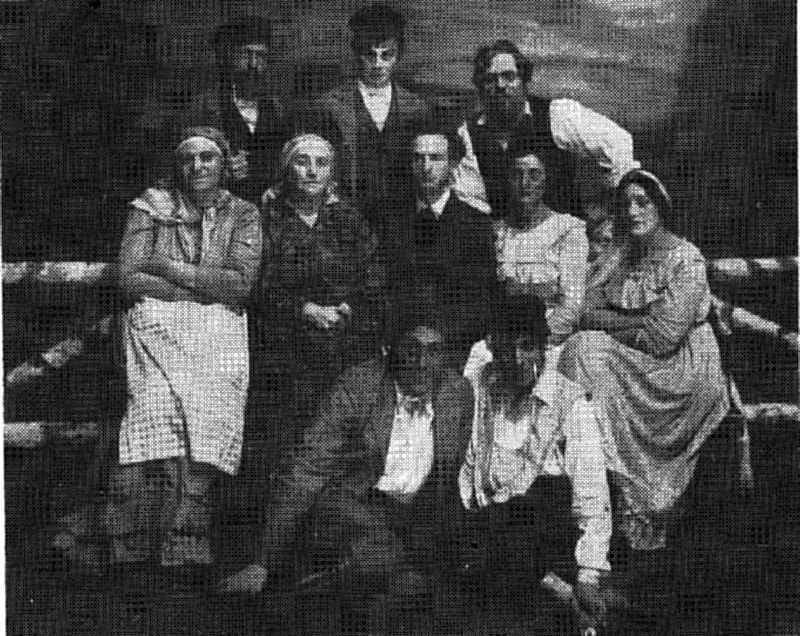 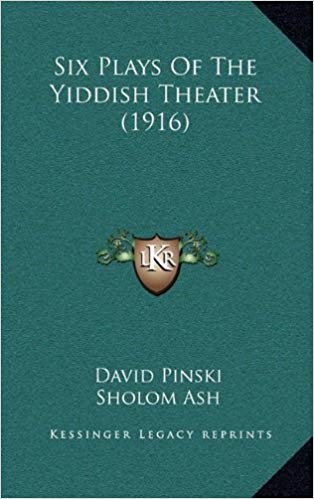 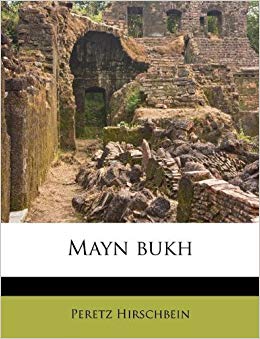 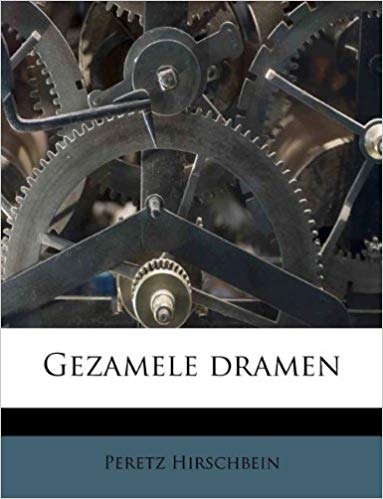 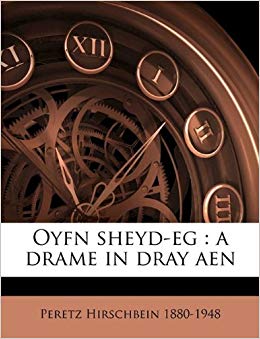 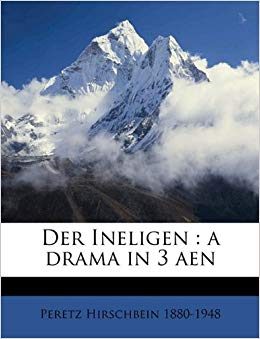 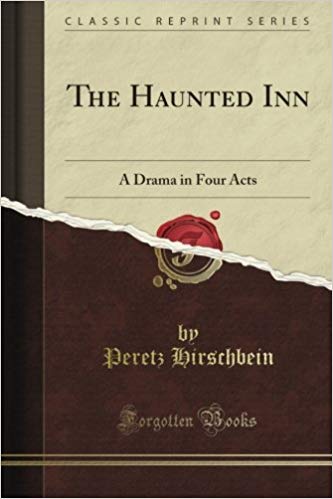 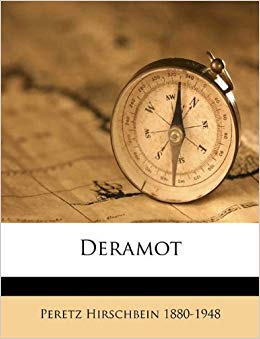 Unusually for a Yiddish playwright, most of Hirschbein’ works have pastoral settings: he had grown up the son of a miller, and made several attempts at farming. The dialogue of his plays is consistently vivid, terse, and naturalistic.

In 1918, while giving a lecture in Calgary, Alberta, Hirschbein met Esther Shumiatcher, a Yiddish poet, and they were subsequently married. Hirschbein’s son, Omus (Amos), was born October 3, 1934 in New York.