In 1814, having settled in Baltimore, he was admitted to the bar of that city. Sometime after 1840 he appears to have moved to Cincinnati. Raymond's distinction rests upon his Thoughts on Political Economy, which appeared in 1820, and in other editions, characterized by unimportant amendments and omissions, in 1823, 1836, and 1840.

Daniel Raymond’s ‘Thoughts on Political Economy’ is America’s first systematic treatise of economics. It elaborates a theory of economic development based on productive power and argues for the importance of government interventions to promote economic activities and maintain a balance between individual and sectorial needs.

(Excerpt from Thoughts on Political Economy: In Two Parts ...)

Excerpt from Thoughts on Political Economy: In Two Parts VII. - The comparative advantages of agricultural and manufacturing labour, VIII - Ah examination of some prevalent theories on the comparative advantages of agriculta ral and manufacturing labour. About the Publisher Forgotten Books publishes hundreds of thousands of rare and classic books. Find more at www.forgottenbooks.com This book is a reproduction of an important historical work. Forgotten Books uses state-of-the-art technology to digitally reconstruct the work, preserving the original format whilst repairing imperfections present in the aged copy. In rare cases, an imperfection in the original, such as a blemish or missing page, may be replicated in our edition. We do, however, repair the vast majority of imperfections successfully; any imperfections that remain are intentionally left to preserve the state of such historical works.

Daniel Raymond was an American lawyer and political economist.

Daniel Raymond was born in 1786 at or near New Haven, Connecticut, a descendant of a settler of the same name at Lyme, who died in 1696.

Daniel was a law pupil of the celebrated Tapping Reeve at Litchfield, from whom he may have learned his Federalism.

In 1814, having settled in Baltimore, he was admitted to the bar of that city. Sometime after 1840 he appears to have moved to Cincinnati.

Raymond's distinction rests upon his Thoughts on Political Economy, which appeared in 1820, and in other editions, characterized by unimportant amendments and omissions, in 1823, 1836, and 1840. 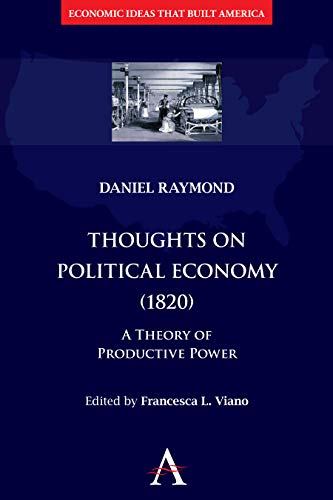 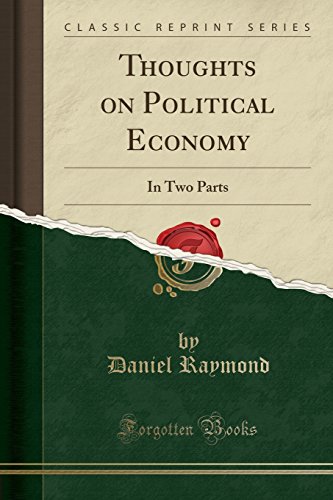 Being briefless, he read critically, though not widely, in political economy, and deprecating the fact that no systematic treatise had been produced on this subject in America, he undertook to prepare one, working at first merely for self-amusement. The chief influence upon his thought, as earlier upon that of Hamilton and Mathew Carey, and later on that of John Rae and Georg Friedrich List, was the American economic environment.

Raymond based his system upon principles fundamentally opposed to those of the English and French classical schools. He made a distinction at the outset between individual wealth, or the sum of individual riches, and national wealth.

The latter was not an accumulation of commodities, but the development of economic capacities; he insisted that political economy, as the science of public prosperity, was concerned far less with property than with productive power. He declared that the problems of individual economy, as embraced chiefly in the division of labor, were not extensible to the universe of individuals, as Smith and his school contended, because the nation as an economic unit interposed itself.

National prosperity required, in Raymond's view, a liberal measure of deliberate economic control, as opposed to the laissez faire policy which had been impressed upon Europe. He made a successful "effort to break loose from the fetters of foreign authority - from foreign theories and systems of political economy, which from the dissimilarity in the nature of the governments, renders them altogether unsuited to our country".

He came out so boldly for protection to American industry that Mathew Carey, then the chief protagonist of this view, offered the University of Maryland substantial financial support for a chair of political economy if Raymond were invited to occupy it, but the offer was not accepted. Raymond dissented sentimentally though not logically from the Malthusian principle of population.

In his Elements of Constitutional Law, published in the volume containing the fourth edition of his Political Economy, 1840, and separately in a first stereotype edition in Cincinnati in 1845, he showed his same intolerance of traditional authority, and also his perfect conviction that social principles are always relative to place and time. His detestation of slavery, first evident in his pamphlet on The Missouri Question (1819), rendered his work unacceptable to the South, and his opposition to a central bank, and indeed all banks of issue, was calculated to dilute the enthusiasm of the nationalist economic thinkers and propagandists for whose cause he did so much to supply a theoretical basis.

His pamphlet on The American System appeared one year later (1828) than List's Outlines of American Political Economy, but there is room to believe that List drew upon Raymond's earlier work, and it is even more probable that Rae was influenced by Raymond. In his lively appreciation of the importance of excellent social administration, as compared with mere legislative fiat, Raymond anticipated later development. He was an early pleader for formal instruction in political economy in schools and colleges in the United States.

He was married, first, to Eliza Amos of Baltimore, who died about 1835, leaving a son and a daughter; second, in 1837, to Delia Matlock of Virginia, by whom he had five sons and a daughter.