Calatrava was born on July 28, 1951, in Benimàmet, an old municipality now part of Valencia, Spain. His Calatrava surname was an old aristocratic one from medieval times and was once associated with an order of knights in Spain.

Calatrava started to show an interest in sculpture and drawing, and by the time he was eight he had enrolled in art classes in Valencia.

Calatrava's family had suffered during the political upheavals of the 1930s in Spain, and they saw an international future as their son's best chance. When he was 13, they took advantage of liberalization of travel restrictions imposed by dictator Francisco Franco in order to send him to Paris under a student exchange program. He later took classes in Switzerland and learned German on his way to eventual fluency in seven languages.

At this point, Calatrava still hoped to become an artist. He made plans to attend art school in Paris at the Ecole des Beaux-Arts (School of Fine Arts), but he arrived in mid-1968, with the student protests of that year at their height, and found that his classes had been canceled. Back in Valencia, he decided to attend the Escuela Técnica Superior de Arquitectura (Technical University of Architecture). He challenged himself with extra work: he and a group of friends wrote two books on the architecture of Valencia and the island of Ibiza while he was enrolled. After he graduated he returned to Switzerland and entered a civil engineering program at the Eidgenössische Technische Hochschule (ETH) or Federal Technology University in Zurich.

Receiving dual Ph.D. degrees in structural engineering and technical science from that institution in 1979 and 1981, he became one of the few architects fully trained as an engineer.

In the late 1980s and the 1990s, Calatrava made his reputation as an architect by designing more than 50 bridges, most of them in Europe. Bridges allowed Calatrava to combine his architectural with his engineering expertise. Often made of white concrete and steel, his bridge designs had distinctive profiles. Many were asymmetrical. The Pont de l'Europe (Bridge of Europe) over the Loire River in Orléans, France, featured a seemingly tense arch, leaping out of the water and through the roadway, that some likened to a bowstring. Calatrava's Alamillo Bridge in Seville, Spain, was supported by a single leaning pylon that looked ready to topple over. "Being an engineer frees him to make his architecture daring," noted Doug Stewart in Smithsonian magazine. Calatrava's bridges attracted attention in the United States, and a show covering his work was mounted at the Museum of Modern Art in New York in 1993. Commissions for bridge projects in the United States began to come to fruition in the early 2000s. A so-called Sundial Bridge (Turtle Bay Bridge) in a park in Redding, California, had a single spire that served as a sundial, and Calatrava's firm made designs for a series of five massive bridges planned for the Dallas, Texas, area.

Calatrava's first completed U.S. building, however, was an addition to the Milwaukee Art Museum originally designed by Eero Saarinen in 1957. The central feature of his design was a massive two-part sunshade resembling a pair of wings that could open and close in order to change the lighting inside the building. The design was ambitious and difficult; Calatrava at one point was forced to come to Milwaukee and earn state engineering certification in Wisconsin in order to keep the project on track. Parts of the shade were eventually made in Spain and shipped to Milwaukee by plane, and its trademark opening and closing capability was not ready for the structure's unveiling in 2001.

Despite these problems, Calatrava's structure proved a terrific crowd-pleaser. Architecture magazine critic Joseph Giovannini, even as he questioned certain aspects of the design, noted that "it is hard to argue with the sheer joy this exuberant museum has stirred in Milwaukee." Attendance at the museum soared, and other cities began to make inquiries about the hot new European architect. The organic forms of Calatrava's buildings appealed to ordinary users put off by the severity of other modern structures, and the ascending, reach-for-the-sky feel of his works often had a spiritual quality that was a perfect fit for American optimism.

That spiritual quality helped win Calatrava a major commission in the wake of the September 11, 2001, terrorist attacks at the World Trade Center in New York City. The terminal of the PATH rail system, serving commuters in New York's western suburbs, had been destroyed in the attacks, and in 2003 Calatrava's design was chosen for its replacement. It too was birdlike, with the interior of the building divided into a pair of wings, and the white building seemed to suggest a phoenix rising from the ashes. Slated to open in 2009, the station was delayed several times as Calatrava's design was altered due to security concerns.

Calatrava remained busy in Europe as well, designing an opera house in Tenerife, in the Canary Islands, that evoked a giant ocean wave. His commissions in Europe in the early 2000s included the first modern bridge allowed to be built over the Grand Canal in Venice, Italy's historic city center, and an opera house in his hometown of Valencia, one of a whole complex of museum buildings that he designed there. But Calatrava's most visible European design of the 2000s was the roof of the Olympic Sports Complex in Athens, Greece, viewed by hundreds of millions of people on international television broadcasts. Resembling a double arch shape in distance shots, it proved on closer inspection to consist of a series of curved white spines that suggested the ribcage of an animal.

Little known in the United States even in the late 1990s, Calatrava was something of an architectural star there by the mid-2000s. In 2005 he won the prestigious Gold Medal award from the American Institute of Architects. Cities vied for his services, and he began to attract commissions for top-dollar office and residential projects—somewhat underrepresented in Calatrava's portfolio up to that point even though such projects were central to the work of most architects. With the 80 South Street Tower in New York City, Calatrava continued reshaping the skyline of Lower Manhattan. The structure consisted of a stack of ten cubes, offset from one another and held up by a giant scaffold. Each cube comprised one condominium, with prices starting at $29 million. Calatrava also seemed ready to move into another area with a commission for the new Cathedral of Christ the Light in Oakland, California, a replacement for a cathedral leveled in the 1989 earthquake that shook the San Francisco Bay area. Calatrava's design featured moving vertical planes meant to evoke a pair of praying hands.

The Oakland design, however, was never built. In 2003 Calatrava and the Diocese of Oakland parted ways, with the scope of Calatrava's project reported as one of a group of causes for the break. Calatrava's massive bridges in Dallas also ran into trouble with city government officials in 2006 after the first span, with a cost initially estimated at $57 million, attracted a low bid of a staggering $113 million from the first round of contractors solicited for the job. With massive projects that seemed designed to outdo his previous creations, Calatrava was in danger of pricing himself out of some markets.

Cost issues were of paramount importance as plans for Calatrava's most ambitious project of all took shape in Chicago. In 2005, developer Christopher Carley announced plans for a Calatrava-designed hotel and condominium tower, the Fordham Spire, that would rise 115 stories above a lot near Chicago's lakefront. Each floor of Calatrava's building would make a two-degree turn from the one below, reaching a 270-degree rotation with the narrowest top floor and giving the building a slim, graceful corkscrew shape. If completed, the building would be the tallest in the United States and perhaps in the world.

The building immediately stirred up public interest in Chicago, already home to two of the world's tallest skyscrapers. It also drew criticism from, among others, rival developer Donald Trump, who questioned its feasibility in an era where terrorism fears had hobbled the construction of tall skyscrapers (although construction was underway on his own 92-story Chicago tower). As of 2006 Calatrava's project had acquired a new developer, Ireland's Garrett Kelleher, and a new name, 400 North Lake Shore Drive. Its financing was reported to be on track, despite a ballooning of its estimated cost from $600 million to $1.2 billion. What was certain was that Santiago Calatrava had already reshaped the look of cities around the world with his landmark projects. 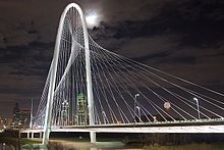 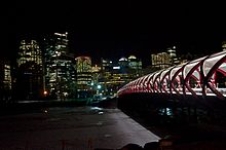 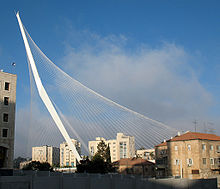 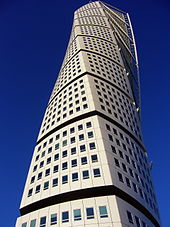 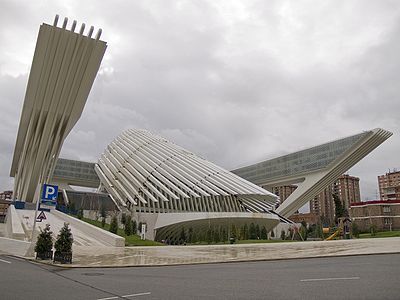 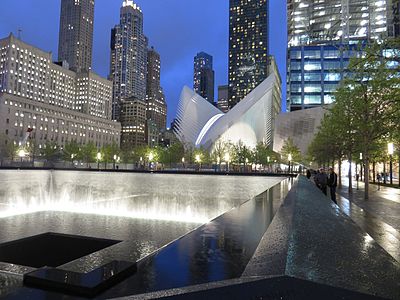 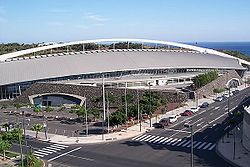 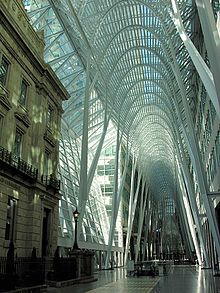 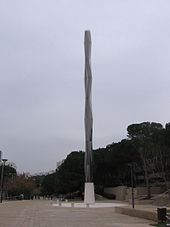 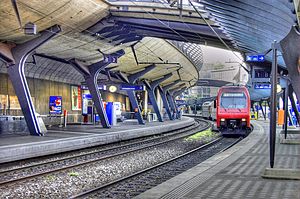 Calatrava is also a sculptor and painter. Some of his architectural works, most notably the Turning Torso in Malmö, Sweden, were original works of sculpture. In 2006, the Metropolitan Museum of Art in New York City held a special one-man exhibition of Calatrava's drawings, sculpture, and architectural models, entitled Santiago Calatrava: Sculpture Into Architecture.

Calatrava has never described himself as a follower of any particular school or movement of architecture. Critics have claimed that a number of influences can be seen in his work. In the journal of the American Institute of Architects, Christopher Hawthorne wrote about his design for Florida Polytechnic University, which he called "an example of Calatrava’s architectural approach and creative sensibility distilled, for better and worse, to its essence. There are all the usual influences on view—the Eero Saarinen forms rendered in the Richard Meier, FAIA, palette—and they are remarkably legible and easy to parse here." Some other critics see his work as a continuation of expressionism. Asked about critics who classified him into different schools, Calatrava responded, "Architectural critics have not yet passed from a state of perplexity about my work."

Quotations: "Architecture itself moves", he told a biographer, "and, with a little chance, becomes a magnificent ruin."

In 1998 he was elected to become a member of "Les Arts et Lettres", in Paris.

On 10 December 2011, Calatrava was appointed a member of the Pontifical Council for Culture for a five-year renewable term by Pope Benedict XVI.

He is also a Senior Fellow of the Design Futures Council.

In Zurich, Calatrava met and married his wife, Robertina, a law student and later lawyer who has played an important role in managing his far-flung business enterprises.