Seth Woodbury MacFarlane was born October 26, 1973 in the small, New England town of Kent, Connecticut. His parents are Ron and Perry, and his younger sister is Rachael. He began drawing cartoons at the age of 2, and his comic strip "Walter Crouton" was published in his local newspaper by the time he was 8. He attended high school at Kent School in Connecticut, and then went on to study animation at the Rhode Island School of Design. 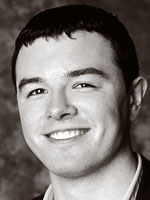 MacFarlane was raised a Catholic, but turned that into a joke by the time he was 11 years-old. Now, he proudly claims atheism.

MacFarlane is a big supporter of the Democratic Party and Obama. And in this case, big means big money. He's a liberal who supports gay marriage, liberal immigration policy, and the legalization of marijuana.

If you have it, multi-talented, humble, generous, hard working and willing to help others. These are just a few of the reasons that Seth Macfarlane has become as successful as he is today. Seth believes that If you want to be successful then you must be willing to follow your heart and put in the work. Nothing in life worth having comes easy, but the end results will be more than worth all the time and effort.

Quotations: "The last time Austria and Germany got together and co-produced something it was Hitler."

"The only problem is time."

"The good thing about Broadway is that you don't have to worry about an airdate. It gets done when it gets done."

"When you are in a room and your job is to write jokes 10 hours a day, your mind starts going to strange places."

"With any half-hour comedy, it kind of takes on its own life and finds itself."

"The success of 'The Simpsons' really opened doors. It showed that if you were working in animation you didn't necessarily have to be working in kids' television."

1. He mastered the basics.

Seth Macfarlane had always showed a passion for animation, so it was of no surprise to his friends and family, that he decided to study animation once he had graduated from high school.

He studied hard and put in a lot of hard work and effort and was rewarded with his Degree in fine arts, a feat that he is still extremely proud of to this day.

2. He is focused and ambitious.

As well as having a talent for, and showing a great passion for animation, Seth Macfarlane is also extremely ambitious and focused. He went into high school and further education knowing exactly what he wanted to achieve.

He not only wanted to get into animated TV, he originally wanted to work for Disney. Once he graduated he changed his mind and decided that maybe Disney wasn’t for him.

How many students can say that “meh maybe I won’t work for Disney after all, I have bigger goals”? Not that many, that’s for sure.

Seth had to be rushed to hospital a couple of years ago suffering from severe exhaustion. He has since learned how to be more balanced yet effective with his time for lower stress and better performance.

3. He is a talented singer & musician.

He can play the piano extremely well and is a singer who trained with a number of highly talented voice coaches, he has appeared as a vocalist at a number of concerts, including the BBC proms.

In 2011 he had signed his first record deal and released his own album soon after, “Music is better than words”.

Not only is he a writer, singer, animator and voice actor, Seth is also a talented actor in the real world. His voice acting talents are legendary and have won him a number of awards.

Seth has also had a number of guest appearances on TV shows and films in non voice acting roles, including “The Gilmore Girls“.

5. He is willing to help others.

Another great characteristic trait of Macfarlane’s is that he is charitable and willing to help others.

He regularly appears at college campuses and speaks to the students there, he donates money to charities and actively supports the rights for gay marriage.

6. He knows that eventually, hard work pays off.

As a result of all of his hard work Seth has been rewarded with a number of prestigious awards over the last few years. Emmy awards for “outstanding voice over performance” as well as his singing abilities. Annie awards, Webby awards, Teen choice awards, his nominations and victories in these categories should speak for themselves.

Seth was also “The Youngest Executive in TV History” landing himself a role as EP at Fox when he was only 24 years old.

Of course no article about Seth Macfarlane would be complete without talking about these great shows. It all began in 1999 when Fox agreed to let Seth make an entire first series of Family Guy. The show received a mixed reaction at first but eventually the world embraced it and let its comedy genius into their hearts. He later went on to co-create the, just as funny, American Dad and, The Cleveland show. Seth Macfarlane recently teamed up with Mark Whalberg to create a box office movie called “Ted” and is filming a new movie at the moment called “A Million Ways to Die in the West“, starring Liam Neeson, Charlize Theron, Neil Patrick Harris and Amanda Seyfried to name a few.

Seth Macfarane’s TV shows and movies provide laughter and entertainment to audiences all over the world, and the viewing figures and DVD sales are simply astounding all because of his amazing creativity and direction.

8. He was persistent in pursuing his dreams.

So far you may think that Seth’s life has sounded like a pure success story, but there have been a number of obstacles and hurdles that he has had to overcome to get to where he is today.

During the early seasons of Family Guy, the show was actually cancelled for a number of years. This had been Seth Macfarlane’s dream, his very own series, and it was vanishing right before his eyes. Instead of giving up and calling it quits, he kept on at Fox insisting that the show could make them all a lot of money. It was not until Fox noticed the shows impressive DVD sales that they decided that Macfarlane had been right and they revived the show.This was actually the first instance that a TV show had been revived based on DVD sales.