Self Portrait in Ukrainian Costume

A Girl Rollingup Her Sleeves. Study for 'Bread'

Has Caught a Cold

Over the Dnipro River

A Model on the Artist's Studio

Ruins of the Roman Forum

Girl with a Butterfly Net

Tetyana Yablonska was a Ukrainian painter. Her early vital pictures are devoted to work and a life of Ukrainian people. She has passed to generalizing images of the nature, differing a subtlety of plastic and color rhythms.

Yablonskaya was born into a family of intellectuals. Her father, Nil Yablonsky, was a graduate of the Moscow University Department of History and Philology, spent some time studying at VHUTEMAS (the Russian acronym for the Higher Art and Technical Studios), and in the 1920s and 1930s worked as an educator, taught art and was engaged in museum management. Home-schooling in the Yablonsky family did not allow the children any freedom to choose their future profession - according to their father's wishes, they were all to become artists.

Therefore, having finished seven years of grammar school in Kamianets-Podilskyi, the Yablonsky sisters (Tatiana, the older, and Elena, the younger, were very close in age) were admitted to the Kiev Art School as second-year students. Two months later, the school was closed due to the beginning of art education reforms in Ukraine, part of a wide campaign of combatting formalism6. It was only a year later, in 1935, that the sisters became students of the completely transformed Kiev Art Institute. During her first two academic years Yablonskaya received instruction from Konstantin Yeleva and Abram Cherkassky; in her third year at the institute, she began her studies at the studio of the renowned master Fyodor Krichevsky.

Yablonskaya was a very hard-working student - her workload could have been that of three students combined. Her industrious-ness and tenacity earned her immediate recognition: Igor Grabar offered high praise for the nude studies she showed at the students' exhibition organized at the Institute in 1937; Yablonskaya's "Nude" (1937) became the first work to be exhibited in the Institute's Curriculum and Teaching Materials Office; she showed her study "Woman with a Yoke" (1938) at the 1939 All-Union Exhibition of Young Artists "20 Years of the Young Communist League"; and, last but not least, at the beginning of 1941 the Institute organized its "Exhibition of Tatiana Yablonskaya's Works."

The young artist's extraordinarily successful career was interrupted by the outbreak of war and her evacuation to a collective farm near Kamyshin, a small town in the Saratov region where Yablonskaya's daughter Yelena was born. It became impossible for Yablonskaya to paint under such circumstances. For these three long years of war, a "city girl" by birth and upbringing, she, in her own words, turned into "Tan'ka the peasant" and a collective farm worker, according to the passport she received while evacuated; just like everybody else at the collective farm, she pulled weeds, mowed, stacked hay, threshed, and pulled a cart with water for the vegetable gardens.

By April 1944, before the war was over, Yablonskaya was back in Kiev, which by then had been liberated by the Soviet Army. Returning to her profession proved to be a difficult undertaking, filled with self-doubt, attempts to make up for time lost (at the suggestion of the Government Committee on the Arts, Yablonskaya tried to replace her graduation work, an unfinished painting that had been lost during evacuation), and searching for her own theme in art under difficult political and social circumstances. Nevertheless, she worked hard, and her new paintings were shown at annual exhibitions, both in Ukraine and around the Soviet Union; "Before the Start" (1947) became her most noteworthy work. This stage in the young artist's career reached its highest point when she painted "Grain", the work that became her first and - for many years - only major success.

In summer 1948 Yablonskaya - at the time, she was teaching art at the Kiev Art Institute - and her students were sent to a "training workshop" at a collective farm; the collective farm, named after Vladimir Lenin, was located in Letava, a village in the Chemerovets region of the Kamianets-Podilskyi province, and had become famous throughout the Soviet Union for its remarkable harvests of grain and beets. It was there that the future painting was conceived; Yablonskaya would go on to finish it a year later and show it first at the 10th Ukrainian Art exhibition, and later at the All-Union Exhibition in Moscow, in November 1949.

When Yablonskaya began working on the painting, she did not build it around any of the studies or drawings she had made while staying at the collective farm. There is not a single portrait in the painting; incidentally, there are few faces - a 1950s critic lamented that too many figures were painted with their backs to the viewer. In place of the collective farm's chairman David Boyko, a man definitely worthy of being in the painting, we see his bag with a newspaper sticking out of it on the left-hand side.

As she continued painting, Yablonskaya removed some genre elements from the foreground, such as a barrel with water, and moved most of the female figures away from the center of the canvas. The original studies for the painting did not have sacks in the foreground - it was only later that they became a sort of visual pedestal for the main figures in the painting.

In her attempt to "create the impression of a typical Ukrainian collective farm", Yablonskaya "dressed" the women in traditional, flowing Ukrainian skirts, instead of those that real collective farm workers wore. However, the idea to put a traditional Ukrainian embroidered peasant shirt on the "main character" in the painting seemed "too one-dimensional, too poster-like a solution." It was the female worker on the right who was depicted in the embroidered shirt.

Yablonskaya effectively avoided being one-dimensional or trivially descriptive, pompous or grandiloquent; she transferred the ideological message from the painting to what was written about the painting - first and foremost, her own texts and the cliches she created to discuss her painting, cliches that later on were replicated in almost all descriptions of her "Grain."

By freeing the painting from the burden of propaganda and narrative, which moved almost entirely into its story, she injected the visual image with a great deal of personal feeling and hope, and sharpened it to achieve a simple and universally clear formula - "happiness and joy of work.” It was indeed a happy moment. By titling the painting "Grain", the artist unlocked those innumerable memories, feelings and connotations that almost everyone has with grain and bread; it was especially true during those post-war years.

Throughout the 1950s Yablonskaya was not able to match the success of "Grain." According to one renowned expert Soviet Art (another name for Socialist Realism) was based on a system that included two approaches. The first, more important one, took art to the level of 'the iconic', and the other one was meant to show contemporary everyday life. The first one demanded the kind of method where details lost their meaning. The second one required a multitude of details to be brought together into a whole picture. Yablonskaya's next major work after "Grain" presented an unusual combination of both methods.

Yablonskaya titled the painting "Spring" (1950, Russian Museum); though she received her second Stalin Prize for it in the same year, "Spring" was not a success. Yablonskaya's attempt to paint the "miners" of Krivorozhye did not match the success of "Grain." Neither did her portrayal of athletes in "On the Dnieper" (1952, Lviv Museum of Ukrainian Art) or that of the builders of Kiev.

Yablonskaya only matched that earlier success in her painting "Morning" (1954, Tretyakov Gallery); however, it seems she was not entirely satisfied with the result. Yablonskaya painted her most important works later, in the 1960s - 1970s: "Getting Ready to Harvest Hay" (1960), "Summer" (1967), "Unknown Heights" (1969), "Evening. Old Florence" (1973), and finally, "Flax Harvest" (1977, all in the Tretyakov Gallery), Yablonskaya's last large-scale, and in the artist's own words, "most hard-won and loved" painting.

A stroke in 1999 left Yablonskaya unable to use her right hand, so she learned to paint with her left one; with her wheelchair by the window, so as to see the sky that she painted so rarely, she worked on her pastels until the last day of her life. She passed away in 2005, after 88 years on this Earth, on the 17th day of the lavish month of Cbexveri. 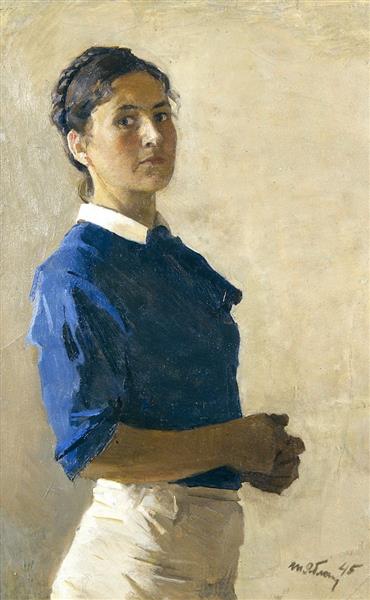 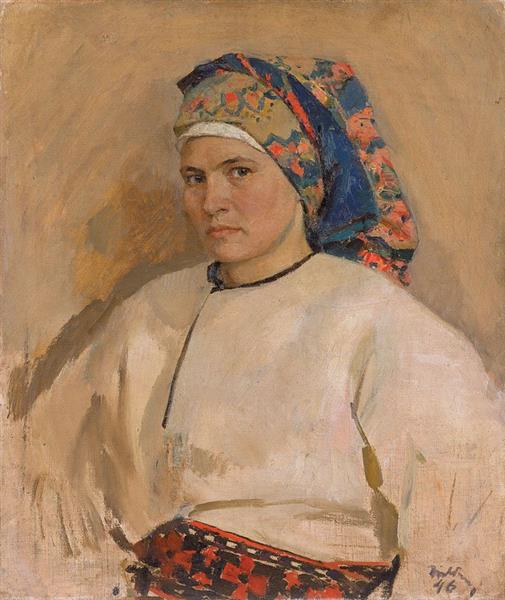 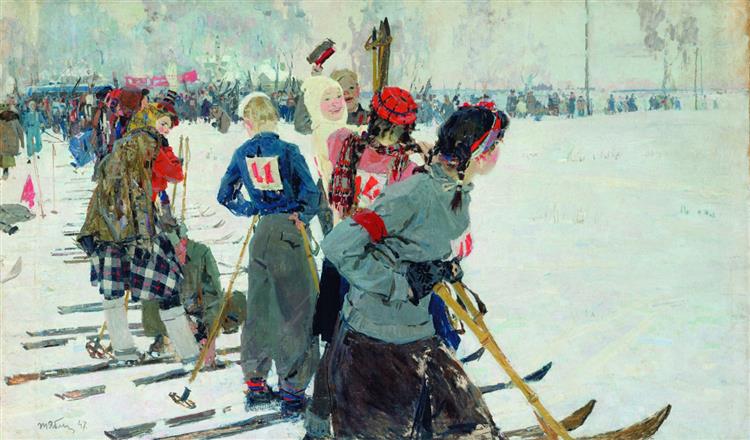 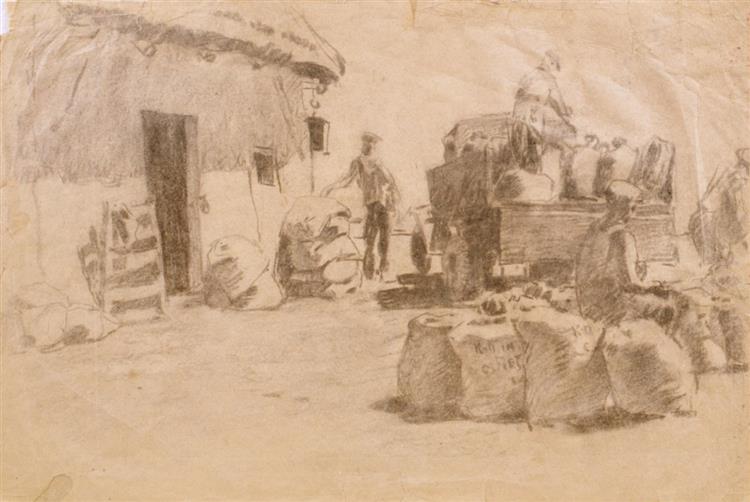 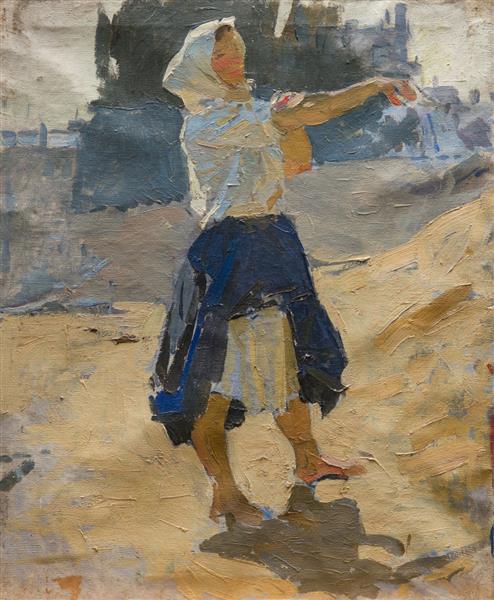 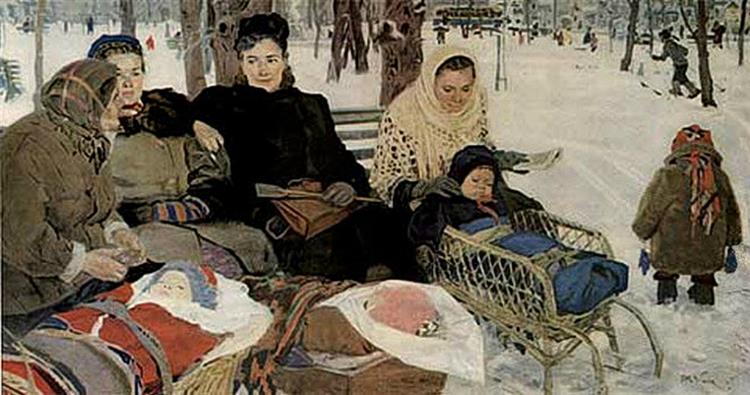 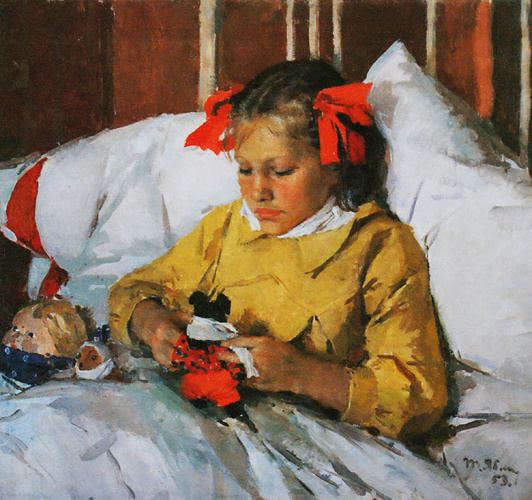 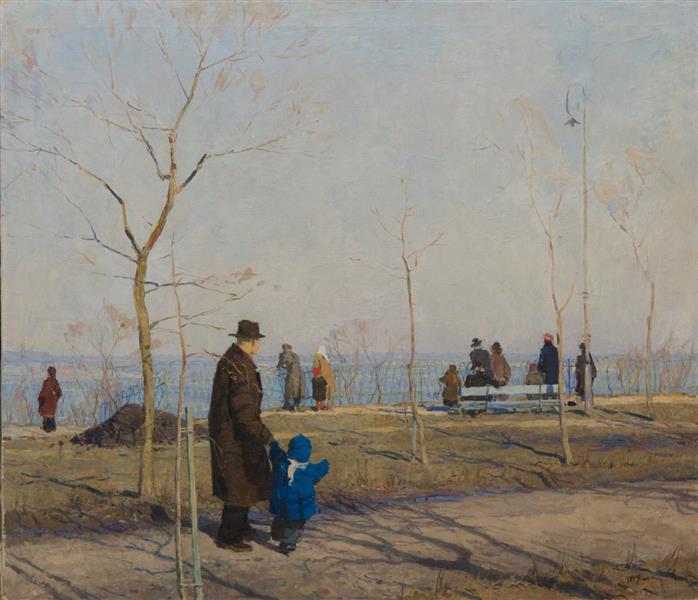 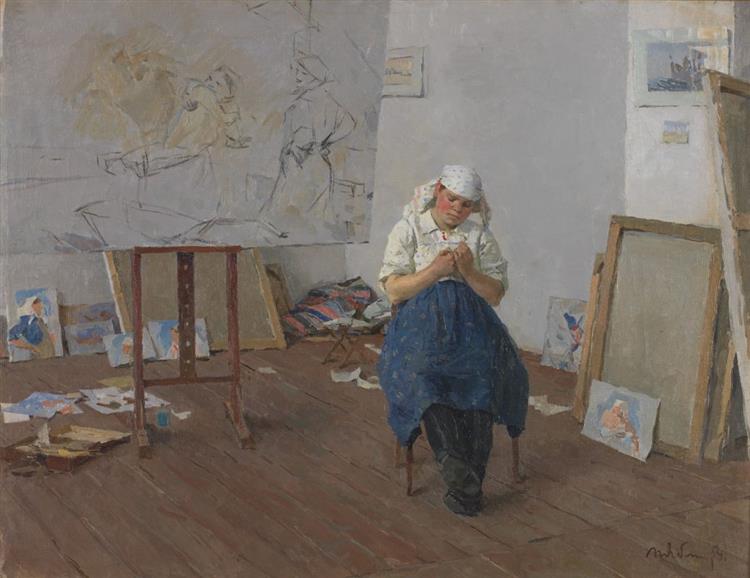 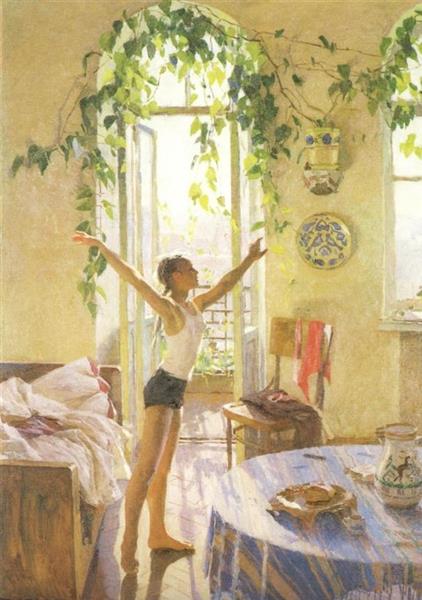 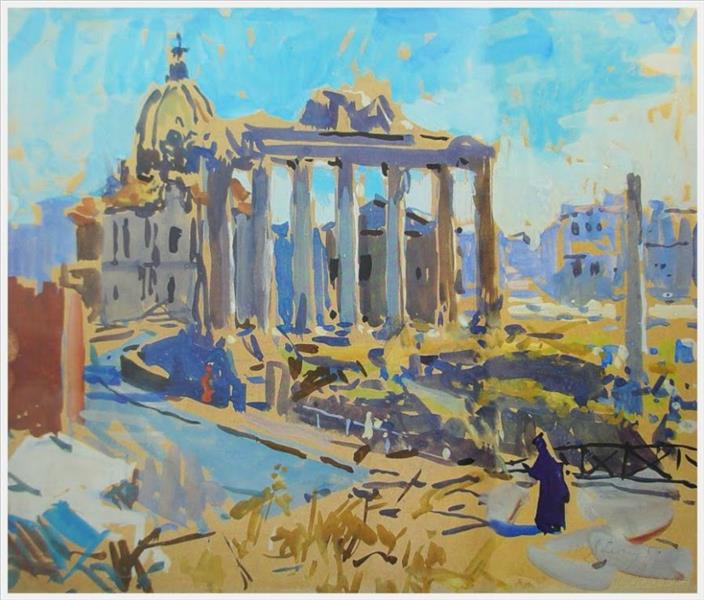 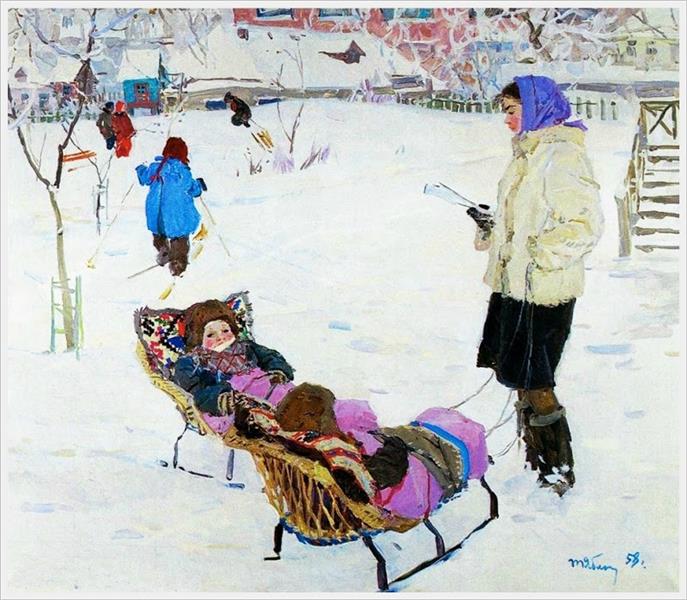 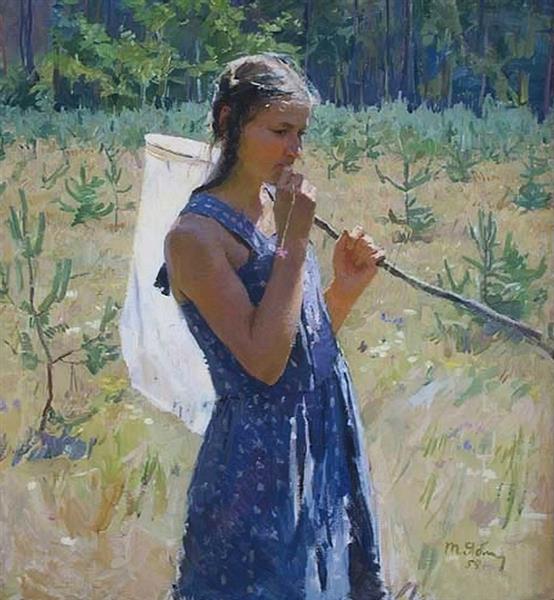 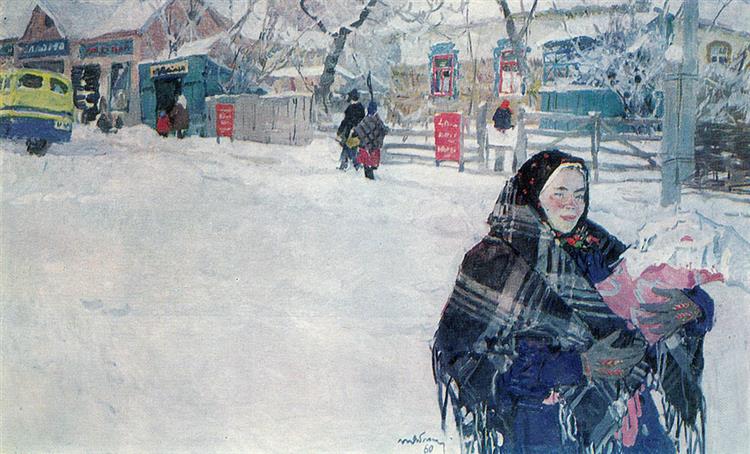 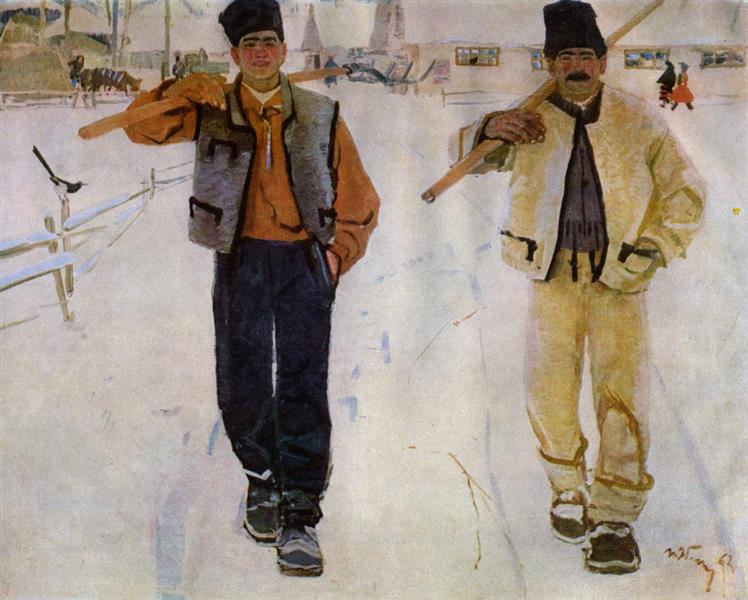 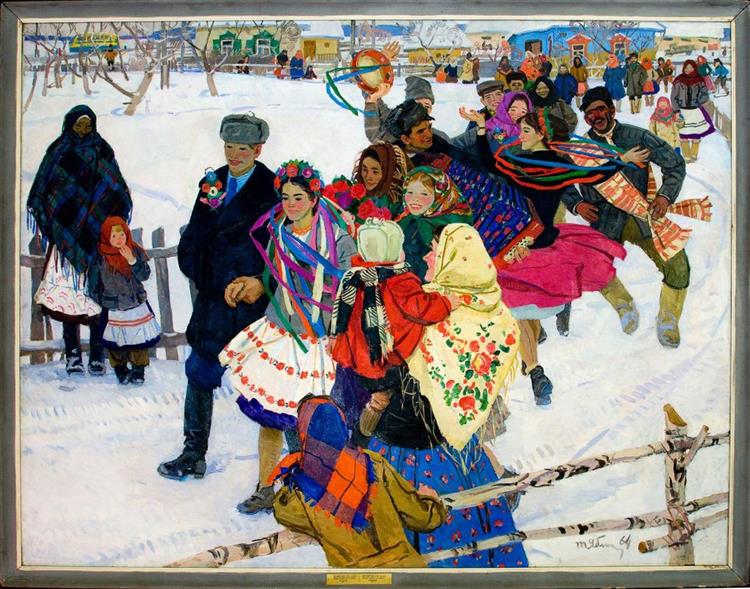 Tetyana Yablonska adhered to the artistic traditions of Socialist Realism.

Quotations: "I am absolutely convinced that a long, caring, meaningful interaction with the best Soviet people, visiting the best industrial sites and collective farms will give our art great momentum...”

She never appeared to be, and never was, an extravagant pioneer. Her unusual sensitivity to whatever is new and promising, to whatever seeks an outlet, ready to be moulded into new imagery or new plastic forms, invariably attracted young artists to her side.

The mother of three children, she lovingly portrayed the harmony of the child and the world around him, the beauty of nature, the charm of carefree youth, creating a large number of small genre paintings.