Other photo of Vyacheslav Yukalov

Other photo of Vyacheslav Yukalov

(This book treats the problem of phase transitions, emphas...)

This book treats the problem of phase transitions, emphasizing the generality and universality of the methods and models used. The course is basically concentrated on the problems of vacuum degeneration in macroscopic systems and a fundamental concept of quasiaverages by Bogolubov playing a special role in the theory of phase transitions and critical phenomena. An analysis of the connection between phase transition and spontaneous symmetry breaking in a macroscopic system allows a unique description of both first- and second-order phase transitions.The unique features of this book are: (i) a unique approach of describing first ― as well as second-order phase transitions, based on the Bogolubov concept of quasi-averages.(ii) a detailed presentation of the material and at the same time a review of modern problems.(iii) a general character of developed ideas that could be applied to various particular systems of condensed matter physics, nuclear physics and high-energy physics.

Yukalov, Vyacheslav was born on February 12, 1946 in Moscow. Son of Dmitry and Alexandra (Nazarova) Yukalov. 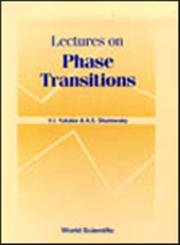