William Seward Burroughs III (July 21, 1947 – March 3, 1981) was an American novelist, also known as William S. Burroughs, Jr. and Billy Burroughs. He wrote three novels, two of which were published as Speed (1970) and Kentucky Ham (1973). His third novel, Prakriti Junction, begun in 1977, was never completed, although extracts from it were included in his third published work Cursed From Birth.

Ethnicity: He bears the name of both his father and his great grandfather, William Seward Burroughs I, the original inventor of the Burroughs adding machine

His mother was addicted to amphetamines, and his father was a heroin addict. On September 6, 1951 Billy's father accidentally shot and killed his mother in a drunken game of 'William Tell' in Mexico City. In chapter three of his second novel, Kentucky Ham, Burroughs relates his memory of the day his mother was shot dead, as well as the following reunion with his father after he was freed from a Mexico City prison. While his father stayed in Mexico, Billy went to live with his paternal grandparents – Mortimer and Laura Lee Burroughs, in St. Louis, Missouri. Living in a wealthy section of Palm Beach, Billy Burroughs began to spend more time out of his grandparents' care and beyond the reach of local authorities. Billy became addicted to amphetamines and resorted to criminal behavior to obtain it: forging prescriptions and visiting doctors' offices to steal prescription pads. Like his father, he was soon arrested. Unlike his father, Billy was not an adult,

and had the tragic story of his parents' life to temper criminal proceedings against him. Nevertheless, his second novel begins with his condemnation to a four-year suspended sentence and required admission to the Federal Narcotics Farm at Lexington in Kentucky. This prison was one of two U.S. Federal prison hospitals treating persons convicted of federal drug crimes in the United States from 1935 until 1973. After being released on parole in 1968, Billy quit his addiction to

amphetamines and sought treatment at The Green Valley School, a private institution run by Reverend Von Hilsheimer in Orange City, Florida. The Green Valley School was where Billy met his wife, a 17-year-old Jewish girl from Savannah, Georgia named Karen Perry, who came from a privileged background. The two formed a romantic relationship and were married in 1969, settling in Savannah. Billy began to write; Karen was a waitress. In 1981, Burroughs stopped taking his anti-rejection drugs. Allen Ginsberg was notified that Billy had returned to Florida to reconnect with the founder of the Green Valley School. Shortly after, Burroughs was found lying chilled, drunk, and exhausted in a shallow ditch at the side of a DeLand, Florida, highway on March 2. A passerby took him to a local hospital, where he died the following day at 6:35 a.m. of acute gastrointestinal hemorrhage associated with micronodular cirrhosis. He was 33 years old 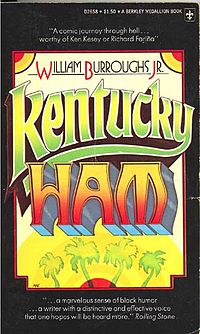