Yasuzumi Saneyoshi was employed by the War Ministry (1871), appointed a naval surgeon (1874) and went to Britain for study (1879). Returning to Japan (1885), he was appointed a senior surgeon and instructor at the Naval Medical School. He became vice-director of the Jikei Hospital in Tokyo (1886), director of the Naval Medical School (1889), received his doctorate (1891), was appointed Surgeon General (1892) and chief of the Medical Affairs Bureau, Navy Ministry (1897). He was made a Baron (1900) for his services in the Sino-Japanese War (1894-1895), nominated a member of the House of Peers (1905) and created a Viscount (1907) for his services in the Russo-Japanese War (1904-1905), and became director of the Tokyo Jikei Medical School (1920). He was also president of the Japan Physicians Mutual Aid Life Insurance Company.

(Tr. from the original Japanese report under the direction...)

Tr. from the original Japanese report under the direction of Baron Saneyoshi, by S. Suzuki.

Yasuzumi Saneyoshi was a Japanese physician, pioneer of naval medicine in Meiji Era Japan and an admiral in the Imperial Japanese Navy.

Yasuzumi Saneyoshi was born on the 20th of March, 1848 in Kagoshima, Japan. He was a second son of Saneyoshi, a retainer of the Kagoshima Clan.

Yasuzumi Saneyoshi was trained by Shosai Ikegami the clan physician, and later studied under Tamanokami Takashina, a Shogunate physician, and Shochu Sato. Also studied at the Daigaku Toko, predecessor of Tokyo University. 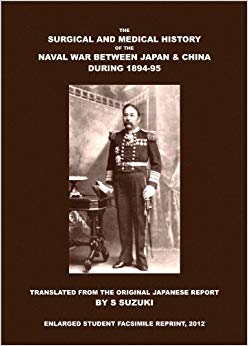