During the period from 1901 till 1903, Otto studied Chemistry at the University of Freiburg.

In 1911, Otto got a Doctor of Medicine degree from Heidelberg University.

Otto Warburg in his laboratory. Photograph courtesy of the Archives of the Max Planck Society, Berlin, Germany.

In 1934, Otto was made a Foreign Member of the Royal Society.

During the period from 1901 till 1903, Otto studied Chemistry at the University of Freiburg.

In 1911, Otto got a Doctor of Medicine degree from Heidelberg University.

Otto Warburg in his laboratory. Photograph courtesy of the Archives of the Max Planck Society, Berlin, Germany.

In 1934, Otto was made a Foreign Member of the Royal Society.

The Metabolism of Tumours

(This is the original text from Nobel Prize Laureate Dr. O...)

The prime cause and prevention of cancer

Otto Heinrich Warburg was a well-known German biochemist and physiologist, who discovered cell oxidation and identified the iron-enzyme complex, which catalyzes cell oxidation. For this work, he was awarded the Nobel Prize in Physiology or Medicine in 1931. Also, Otto authored several writings and numerous scientific papers. In addition, Warburg contributed to different journals and periodicals, including Science.

Otto was one of four children and the only boy. The Warburg household often hosted prominent guests from the German scientific community, such as physicists Albert Einstein, Max Planck, Emil Fischer and Walther Nernst.

Later, his interest turned to medicine, particularly to cancer, so he continued his studies at Heidelberg University, where he earned a Doctor of Medicine degree in 1911. 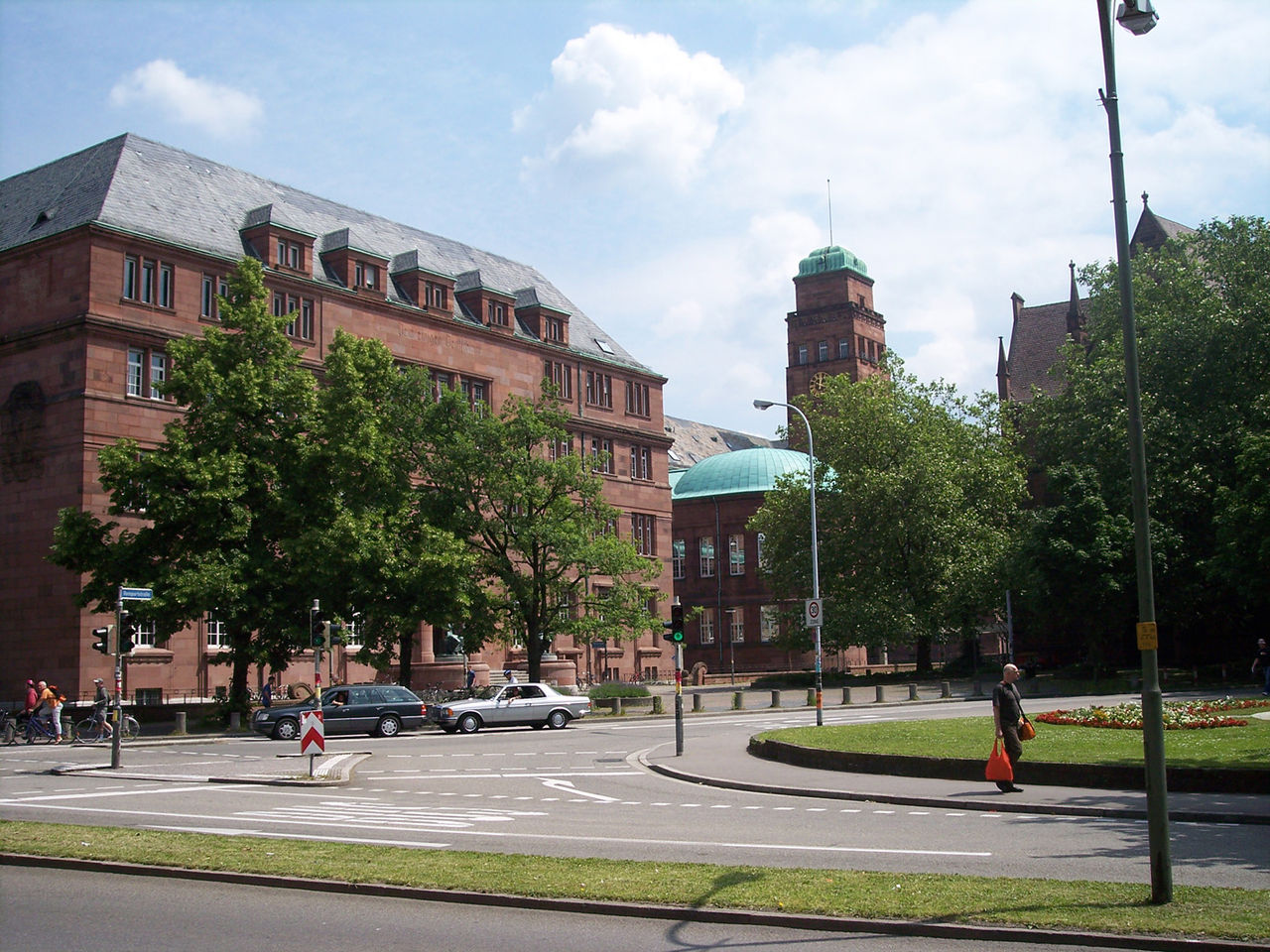 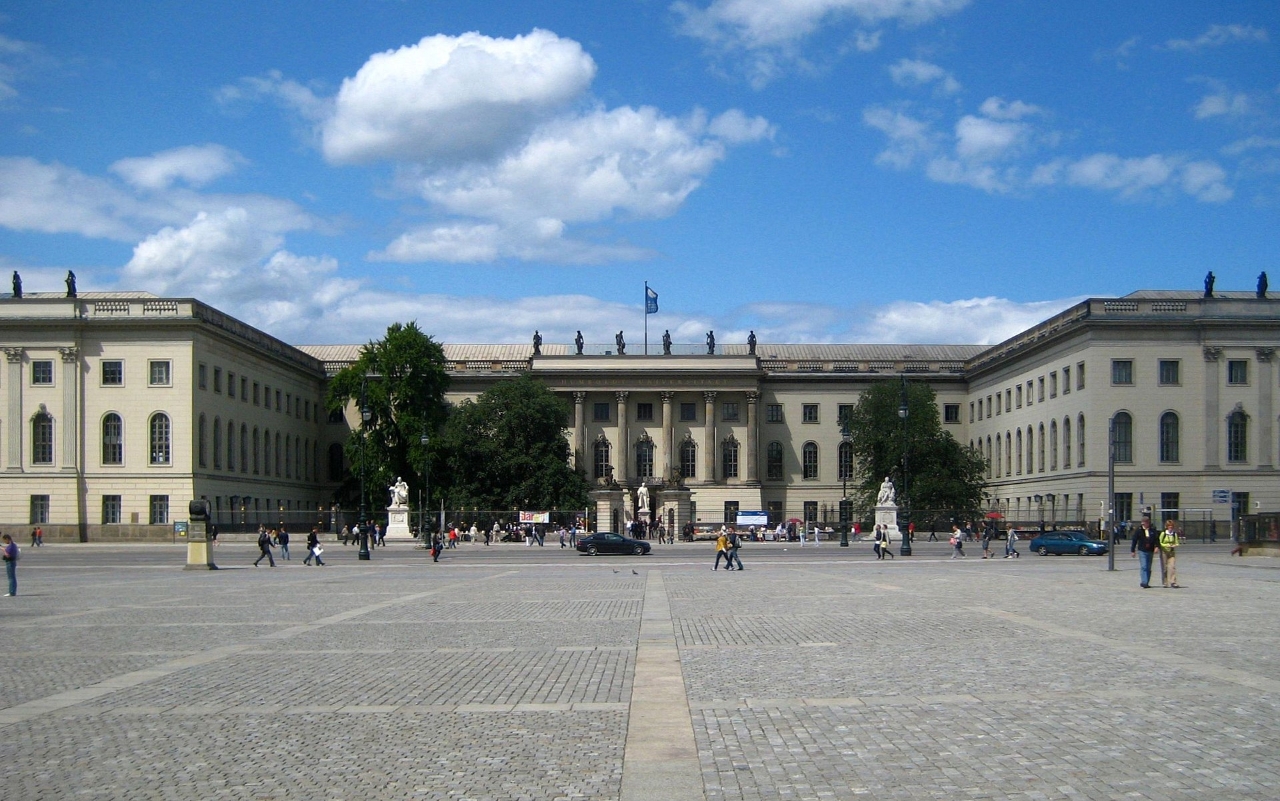 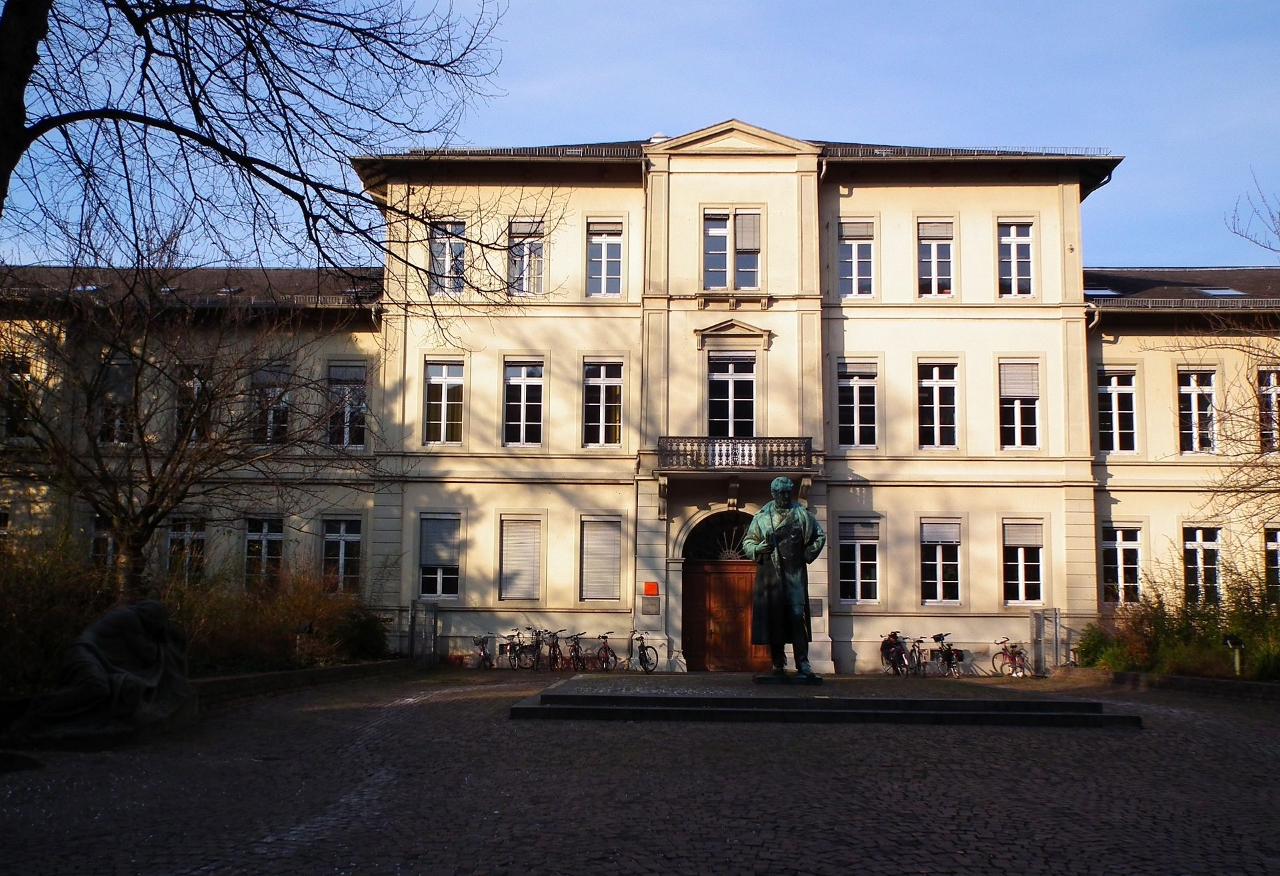 After receiving a Doctor of Medicine degree in 1911, Otto remained at Heidelberg University, conducting research for several more years until 1913, also making several research trips to the Naples Zoological Station. Warburg’s career goal was to make great scientific discoveries, particularly in the field of cancer research, according to the biography, written by Hans Adolf Krebs, one of Warburg’s students and winner of the 1953 Nobel Prize in Medicine and Physiology. Although he did not take up problems specifically related to cancer until the 1920's, his early projects provided a foundation for future cancer studies. For example, Warburg's first major research project, published in 1908, examined oxygen consumption during growth. In a study, using sea urchin eggs, Warburg showed, that after fertilization, oxygen consumption in the specimens increased by 600 percent. This finding helped to clarify earlier work, that had been inconclusive on associating growth with increased consumption of oxygen and energy. A number of years later, Warburg did some similar tests of oxygen consumption by cancer cells.

In 1913, Warburg was made a member and researcher at the Kaiser Wilhelm Gesellschaft, a prestigious scientific institute, whose members had the freedom to pursue whatever studies they wished. He had just begun his work at the institute, when World War I started. Otto volunteered for the army and joined the Prussian Horse Guards, a cavalry unit, that fought on the Russian front. Warburg survived the war and went to work at the Kaiser Wilhelm Institute for Biology (present-day Kaiser Wilhelm Society) in Berlin in 1918. Now thirty-five years old, he would devote the rest of his life to biological research, concentrating on studies of energy transfer in cells (cancerous or otherwise) and photosynthesis.

During Warburg’s youth, he had become familiar with Einstein’s work on photochemical reactions, as well as the experimental work, done by his own father, Emil Warburg, to verify parts of Einstein’s theory. With this background, Warburg was especially interested in the method, by which plants converted light energy to chemical energy. Warburg used his manometric techniques for the studies of photosynthesis he conducted on algae. His measurements showed, that photosynthetic plants used light energy at a highly efficient sixty-five percent. Some of Warburg’s other theories about photosynthesis were not upheld by later research, but he was nevertheless considered a pioneer for the many experimental methods he developed in this field. In the late 1920's, Warburg began to develop techniques, that used light to measure reaction rates and detect the presence of chemical compounds in cells. His "spectrophotometric" techniques formed the basis for some of the first commercial spectrophotometers, built in the 1940's.

Otto's work on cell respiration was another example of his interest in how living things generated and used energy. Prior to World War I, Warburg discovered, that small amounts of cyanide can inhibit cell oxidation. Since cyanide forms stable complexes with heavy metals, such as iron, he inferred from his experiment, that one or more catalysts important to oxidation must contain a heavy metal. He conducted other experiments with carbon monoxide, showing, that this compound inhibits respiration in a fashion similar to cyanide. Next he found, that light of specific frequencies could counteract the inhibitory effects of carbon monoxide, at the same time demonstrating, that the "oxygen transferring enzyme", as Warburg called it, was different from other enzymes, containing iron. He went on to discover the mechanism, by which iron was involved in the cell’s use of oxygen. It was Warburg’s work in characterizing the cellular catalysts and their role in respiration, that earned him a Nobel Prize in 1931.

Nobel Foundation records indicate, that Warburg was considered for Nobel Prizes on two additional occasions: in 1927 for his work on metabolism of cancer cells, then in 1944 for his identification of the role of flavins and nicotinamide in biological oxidation. Warburg did not receive the 1944 award, however, because a decree from Hitler forbade German citizens from accepting Nobel Prizes.

In 1931, Warburg established the Kaiser Wilhelm Institute for Cell Physiology with funding from the Rockefeller Foundation in the United States. During the 1930's, Warburg spent much of his time, studying dehydrogenases, enzymes, that remove hydrogen from substrates. He also identified some of the cofactors, such as nicotinamide, derived from vitamin B3 (niacin), that play a role in a number of cell biochemical reactions.

Warburg conducted research at the Kaiser Wilhelm Institute for Cell Physiology until 1943, when the Second World War interrupted his investigations. Air attacks, targeted at Berlin, forced him to move his laboratory about 30 miles away to an estate in the countryside. For the next two years, he and his staff continued their work outside the city and out of the reach of the war. Then, in 1945, Russian soldiers, advancing to Berlin, occupied the estate and confiscated Warburg’s equipment. Although the Russian commander admitted, that the soldiers acted in error, Warburg never recovered his equipment. Without a laboratory, he spent the next several years writing, publishing two books, that provided an overview of much of his research. He also traveled to the United States during 1948 and 1949 to visit fellow scientists.

Even though Warburg was of Jewish ancestry, he was able to remain in Germany and pursue his studies, unhampered by the Nazis. One explanation is that Warburg’s mother was not Jewish and high German officials "reviewed" Warburg’s ancestry, declaring him only one-quarter Jewish. As such, he was forbidden from holding a university post, but allowed to continue his research. There is speculation, that the Nazis believed Warburg might find a cure for cancer and so did not disturb his laboratory. Scientists in other countries were unhappy, that Warburg was willing to remain in Nazi Germany. His biographer, Hans Krebs, noted, however, that Warburg was not afraid to criticize the Nazis. At one point during the war, when Warburg was planning to travel to Zurich for a scientific meeting, the Nazis told him to cancel the trip not asking "why". "With some measure of courage", wrote Krebs, "he sent a telegram to a conference participant from England": 'Instructed to cancel participation without giving reasons'". Although the message was not made public officially, the text was leaked and spread through the scientific community. Krebs believed Warburg did not leave Germany because he did not want to have to rebuild the research team he had assembled. The scientist feared, that starting over would destroy his research potential, Krebs speculated.

In 1950, Warburg moved into a remodeled building in Berlin, which had been occupied by the United States armed forces, following World War II. This new site was given the name of Warburg’s previous scientific home — the Kaiser Wilhelm Institute for Cell Physiology — and three years later renamed the Max Planck Institute for Cell Physiology. Warburg continued to conduct research and write there, publishing 178 scientific papers from 1950 until his death in 1970.

For all of his interest in cancer, Warburg’s studies did not reveal any deep insights into the disease. When he wrote about the "primary" causes of cancer later in his life, Otto’s proposals failed to address the mechanisms, by which cancer cells undergo unchecked growth. Instead, he focused on metabolism, suggesting, that in cancer cells "fermentation" replaces normal oxygen respiration. Warburg’s cancer studies led him to fear, that exposure to food additives increased one’s chances of contracting the disease. In 1966, he delivered a lecture, in which he stated, that cancer prevention and treatment should focus on the administration of respiratory enzymes and cofactors, such as iron and B vitamins. The recommendation elicited much controversy in Germany and elsewhere in the Western world. 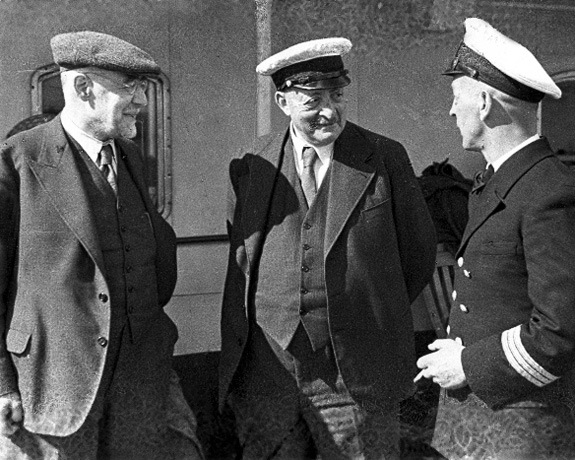 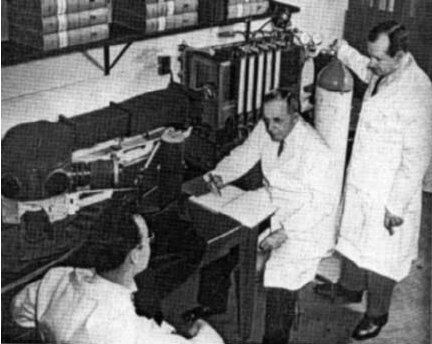 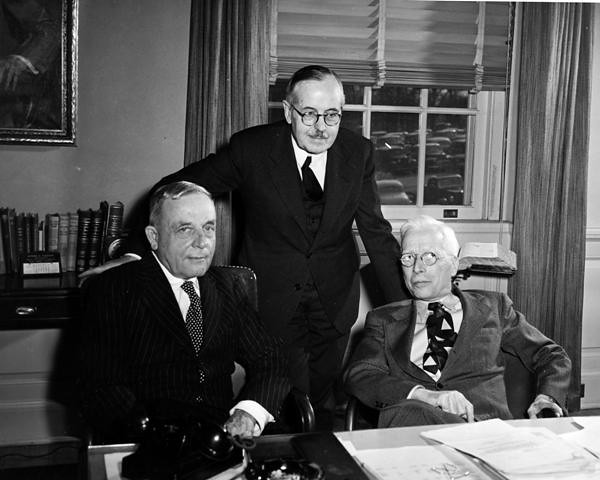 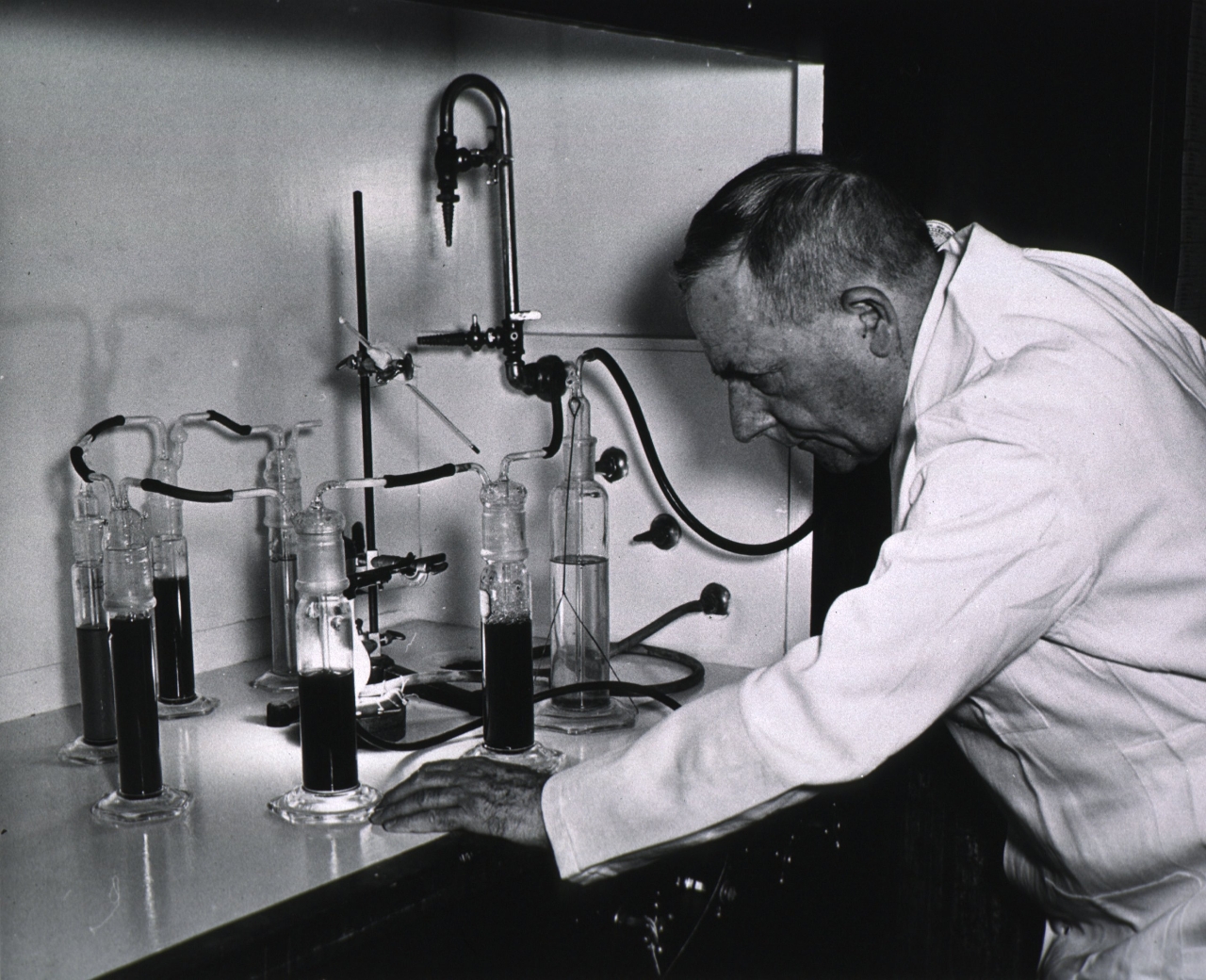 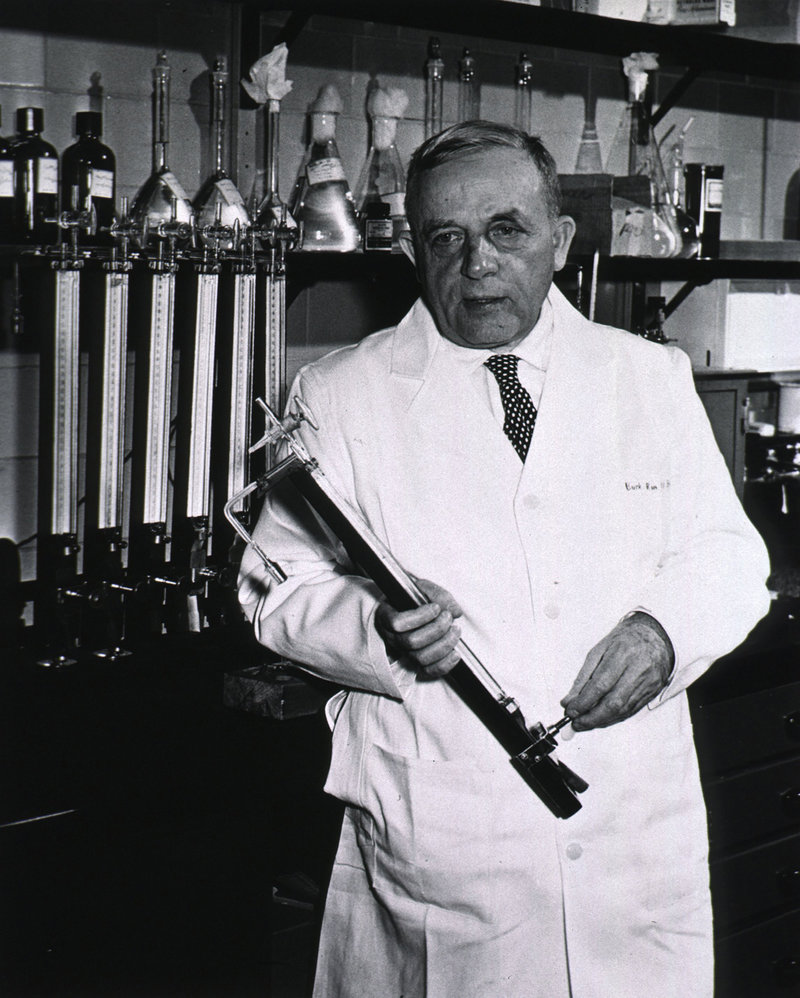 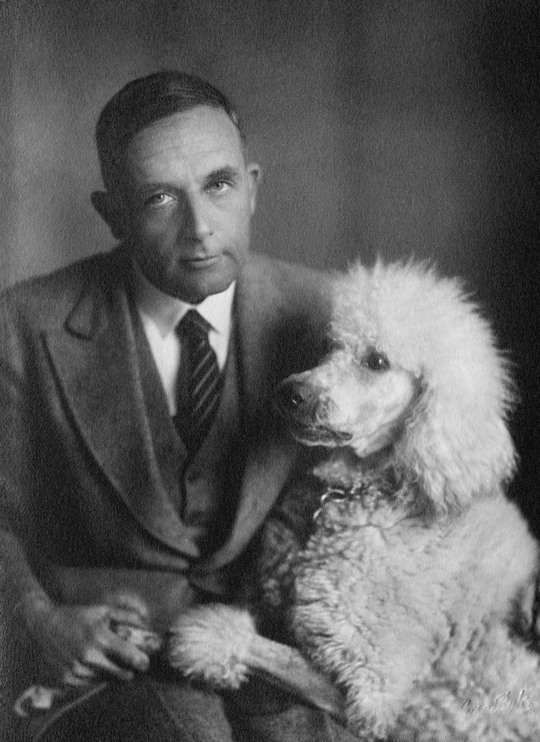 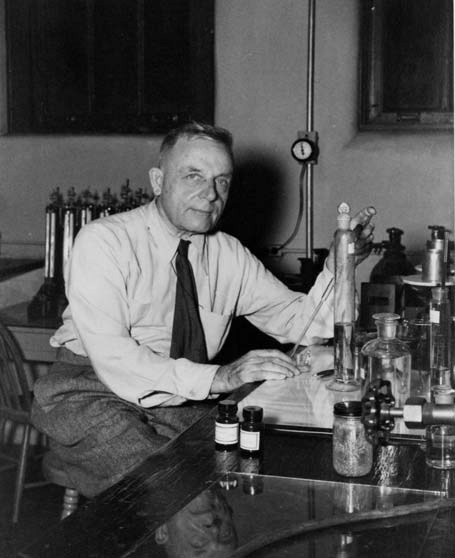 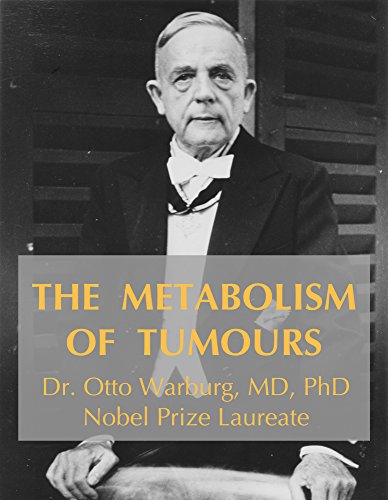 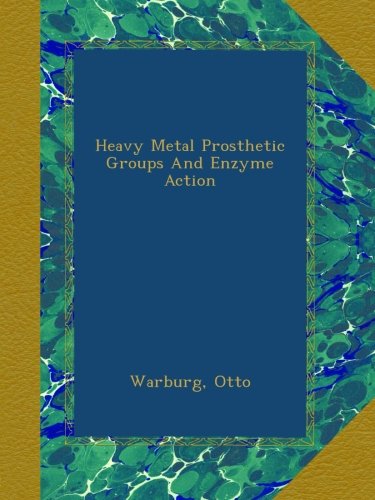 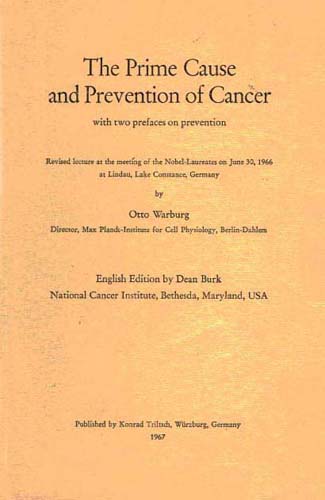 Quotations: "Catalytic oxidation in living substances rests upon change of valency in an iron compound, which is the respiratory oxygen-transferring ferment."

"Green, red and mixed shades of haemins are known. If magnesium is replaced by iron in chlorophyll, green haemins are obtained. Their colour is due to a strong band in the red, which is already recognized in chlorophyll."

"The concentration of the ferment iron in living substance is very small, being in the region of 1 g to 10 million g of cellular substance."

Throughout his life, Warburg was extremely fond of walking and sailing. Also, he loved dogs and horses, and kept himself in remarkable physical trim.

Warburg for decades vacationed in England, for whose inhabitants he had an unbounded admiration, and he was an inveterate reader of the London Times and Manchester Guardian, as well as of innumerable English authors of all sorts, including Churchill, the Mitfords and others.

Warburg’s devotion to science led him to forego marriage, since he thought it was incompatible with his work.